O send out your light and your truth; let them lead me; let them bring me to your holy hill and to your dwelling.
—Psalm 43:3 Today I’m bringing my sermon series on UCC heritage to a close. Several of my sermons were about the different traditions that came together in 1957 to form the UCC, and one of those were the old Congregational churches. Though this church was gathered after the denomination was formed, Congregationalists probably had a bigger influence here. You can see it in the way we govern ourselves.

And while we should never forget our Evangelical, Reformed, and Christian ancestors, in many ways it’s the Congregationalists we remember most. When somebody asks us what the UCC is, for example, many of us take the easy route and explain that we’re the descendants of the Pilgrims who came over on the Mayflower. And it’s that Congregational heritage that we seem to harken back to the most today when we talk about certain slogans the UCC adopted when we realized, after fifty years, nobody had any idea who we were.

To understand a couple of these slogans, we need to remember what the Pilgrims’ pastor said to them in a letter. Remember, the Pilgrims were English, but had been living in Holland in 1620 when the Mayflower set sail. And the majority of the Pilgrims stayed behind in Europe when the others left for the New World, so their pastor, John Robinson, stayed, too. But he sent the rest of his flock into the unknown with these words, that we still remember today: God hath yet more light and truth to break forth from his holy word.

There’s a theology behind these words that we need to give some thought to. The most obvious thing about them is the Pilgrims’ love of God’s word. They didn’t use a liturgy, and they didn’t recite creeds or require their ministers—or anyone else for that matter—to agree with any confessions of faith. They based their worship, their church government, and their beliefs only on the Bible. But they had the humility and the good sense to realize that anything they believed about the Bible was influenced by their human understanding, and human understanding can change as we move forward in time. Though we’re told these Pilgrims and the Puritans who followed on their heels were closed-minded, this isn’t really true. One of their core beliefs was that they must be prepared to be wrong.

And so back in 2005 when we were preparing to celebrate the 1957 marriage of the Congregational Christian Churches and the Evangelical and Reformed Church, we started an ad campaign to let people know first, that there was such a thing as the United Church of Christ, and second, what it was that we stood for. And remembering John Robinson’s words, we adopted two slogans.

The first one was a bit longer, and it was sort of a clever modern take on the Robinson quote. It was from a letter from Gracie Allen to her husband, George Burns, that he opened after she’d died. And it said, “Never place a period where God has placed a comma.” In other words, nothing is final, not even death. And because we had adopted this quote to help describe how we looked at life and theology, we used the comma as our logo. It didn’t replace our old cross, orb, and crown logo, but it was used alongside it. 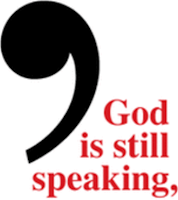 And the second logo was based on both sayings, “God hath yet more light and truth to break forth from his holy word,” and “Never place a period where God has placed a comma.” And this logo was much shorter and easier to remember: “God is still speaking,” (and instead of a period at the end of that little sentence, we placed, of course, a comma).

This is an excellent slogan, of course. It tells others—and ourselves—that we servants of God, and not slaves to old interpretations of the scriptures. Just as God spoke to Augustine and Luther and Calvin, God still speaks to us today. We are no less equipped to study the word than our ancestors were. The danger, of course, is that we not make this slogan the equal of scripture, interpreting it to mean that our opinions—whether based on the Bible or not—carry the same weight as the scriptures. Yes, God speaks to us through nature and through human love, but our proclamation must be based on our interpretation of the 66 books of the Bible.

A few years after we adopted these slogans, we adopted another, which is equally as important. It’s a bit different from the 1620 Robinson quote and the 2005 slogans though. It’s a sentence that we all know and love: “No matter who you are or where you are on life’s journey, you’re welcome here.” I’m very fond of these words, and especially like to use them when we share the Lord’s Supper.

This slogan is not without its problems, though. While everybody is welcome, I fear they give the impression that all opinions are to be given equal voice. For example, I don’t want racism or antisemitism or misogyny voiced in the church, even if we open our doors to people who hold those views. And I also fear that those words have been used by some as an excuse for arrogance. “My church welcomes me as I am, so I don’t need to examine my life or change in any way.” This attitude has a negative impact not only how we’re perceived, but even on the ways we treat each other sometimes. I see it all the time online, and it bothers me. Yes, we believe that God loves people as God created them—regardless of ethnic group or language or gender expression or sexual orientation. And God is, as they used to say (Acts 10:34), “no respecter of persons”—that is God is unimpressed with wealth, or human power, or our often silly notions of respectability. But all of us, no matter who we are or where we are on life’s journey, are in need of other kinds of transformation. We all need to pray more, and learn more, and serve more. We all need more faith, hope, and love. We all need to be better at making peace and working for justice. And so we should never allow a church slogan to give us an excuse for stagnation. 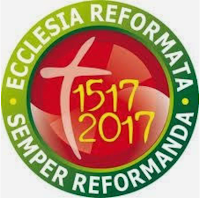 Our willingness to admit that we’re wrong—not just as individuals, but as a church—is part of our DNA. We see it in John Robinson’s letter to the Pilgrims in the early 1600’s. And nearly a hundred years before that, John Calvin wrote that, “by refusing to acknowledge any church save one that is perfect, we leave no church at all.” In other words, if we’re going to shop around for a church that’s perfect, we’ll never find a church to go to. The Latin phrase for this is Ecclesia Reformata Semper Reformanda—the Reformed Church must always be reforming—a phrase popularized by Karl Barth in the 40’s. It’s an affirmation not of what the church is, but what the church is not and never will be—at least this side of the return of Christ—and that is perfect.

We gather every week and affirm that all are welcome, regardless of who we are. But we also affirm that God is still speaking. The only way those two things can work together is if we admit that we gather as ourselves to be spoken to by a Power that is greater than we are; and that, once we’ve encountered that Power, we cannot not be transformed. No matter who we are or where we are on life’s journey, we are welcomed into a community of individuals who are being transformed from hate to love, from violence to peace, from injustice to justice, and from despair to hope. But the transformation is also from going it alone to speaking and acting as a community of faith.

And so on this day when we celebrate the 501st anniversary of the Protestant Reformation, let us thank God that we are a Reformed Church, but let us not cease to continually be reforming.
—©2018 Sam L. Greening, Jr.