In God we have boasted continually, and we will give thanks to your Name forever.
✙ Psalm 44:8
✙ 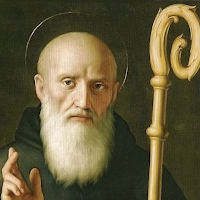 There lived a man, venerated in the Roman church as a saint, named Benedict from the Italian town of Norcia (Nursia). Early in the 6th century, he founded several communities whose members divided their day into eight hours each of prayer, labor, and sleep. Their motto, in fact, was Ora et Labora—or "pray and work." One of Benedict's great contributions to the Christian religion was what became known as the Rule of Saint Benedict, which provided guidelines for religious men and women living in community.
✙
The Benedictine motto "pray and work"
Read more »

I shall not die, but I shall live, and recount the deeds of the Lord.
✙ Psalm 118:17
✙
God sent His son, they called Him, Jesus.
He came to love, heal and forgive.
He lived and died to buy my pardon—
an empty grave is there to prove my Savior lives.

How sweet to hold a newborn baby,
and feel the pride and the joy He gives;
Read more » 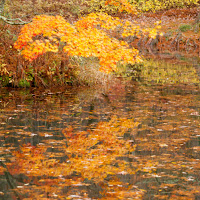 The theme of today's worship service is wisdom, and the scripture lesson is Psalm 1. All three hymns had something to do with wisdom, including the opening hymn, We Gather Together. In the Chalice Hymnal which we have in our pews, this song opens, "We gather together to ask for God's blessing, to turn to a wisdom surpassing our own." The middle hymn, to a rather famous Roman Catholic tune, is Holy Wisdom. And the closing hymn, Be Thou My Vision, includes the verse, "Be thou my wisdom and thou my true word..."
Here's the video of the complete service, followed by a transcription of the sermon in its entirety.
Read more »

On Training the Tongue

Refrain from anger, and forsake wrath. Do not fret—it leads only to evil.
✙ Psalm 37:8
✙

Marilynne Robinson's Gilead is one of my Top Five books of all time. In it, an elderly Congregational minister is writing down for his young son all the thoughts on life and family history that he knows he won't be around to tell him in person when his son is old enough to understand. Here's one of his observations that I found particularly insightful: "I have always liked the phrase nursing a grudge because many people are tender of their resentments as of the thing nearest their hearts."
✙
Anger is a God-given emotion, and when used correctly—such as when Jesus cleanses the Temple, or when he accuses those who manipulate others of being hypocrites—
Read more »

The Lord make his face to shine upon you, and be gracious to you.
✙ Numbers 6:25
✙ 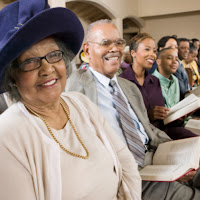 It is a wonderful thing to gather in Christ's Name. We sit quietly and meditate in the sanctuary. We sing God's praises. We hear the word. We pray. We gather round the table. We greet our brothers and sisters. It is as though the air is permeated with the Divine, and we breathe in the Spirit of Christ. Worship is calming. Worship is strengthening. Worship is encouraging. Worship is exciting.
But we cannot remain forever in the sanctuary, and our physical lives are not lived entirely in the midst of the great congregation.
Read more »