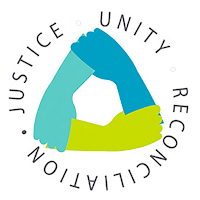 1. We believe in the triune God, Father, Son and Holy Spirit, who gathers, protects and cares for the church through Word and Spirit. This, God has done since the beginning of the world and will do to the end.

2. We believe in one holy, universal Christian church, the communion of saints called from the entire human family.

that Christ's work of reconciliation is made manifest in the church as the community of believers who have been reconciled with God and with one another (Eph. 2:11-22);
that unity is, therefore, both a gift and an obligation for the church of Jesus Christ; that through the working of God's Spirit it is a binding force, yet simultaneously a reality which must be earnestly pursued and sought: one which the people of God must continually be built up to attain (Eph. 4:1-16);
that this unity must become visible so that the world may believe that separation, enmity and hatred between people and groups is sin which Christ has already conquered, and accordingly that anything which threatens this unity may have no place in the church and must be resisted (John 17:20-23);
that this unity of the people of God must be manifested and be active in a variety of ways: in that we love one another; that we experience, practice and pursue community with one another; that we are obligated to give ourselves willingly and joyfully to be of benefit and blessing to one another; that we share one faith, have one calling, are of one soul and one mind; have one God and Father, are filled with one Spirit, are baptized with one baptism, eat of one bread and drink of one cup, confess one name, are obedient to one Lord, work for one cause, and share one hope; together come to know the height and the breadth and the depth of the love of Christ; together are built up to the stature of Christ, to the new humanity; together know and bear one another's burdens, thereby fulfilling the law of Christ that we need one another and upbuild one another, admonishing and comforting one another; that we suffer with one another for the sake of righteousness; pray together; together serve God in this world; and together fight against all which may threaten or hinder this unity (Phil. 2:1-5; 1 Cor. 12:4-31; John 13:1-17; 1 Cor. 1:10-13; Eph. 4:1-6; Eph. 3:14-20; 1 Cor. 10:16-17; 1 Cor. 11:17-34; Gal. 6:2; 2 Cor. 1:3-4);
that this unity can be established only in freedom and not under constraint; that the variety of spiritual gifts, opportunities, backgrounds, convictions, as well as the various languages and cultures, are by virtue of the reconciliation in Christ, opportunities for mutual service and enrichment within the one visible people of God (Rom. 12:3-8; 1 Cor. 12:1-11; Eph. 4:7-13; Gal. 3:27-28; James 2:1-13);
that true faith in Jesus Christ is the only condition for membership of this church.

Therefore, we reject any doctrine

which absolutizes either natural diversity or the sinful separation of people in such a way that this absolutization hinders or breaks the visible and active unity of the church, or even leads to the establishment of a separate church formation;
which professes that this spiritual unity is truly being maintained in the bond of peace while believers of the same confession are in effect alienated from one another for the sake of diversity and in despair of reconciliation;
which denies that a refusal earnestly to pursue this visible unity as a priceless gift is sin;
which explicitly or implicitly maintains that descent or any other human or social factor should be a consideration in determining membership of the church.

that God has entrusted the church with the message of reconciliation in and through Jesus Christ, that the church is called to be the salt of the earth and the light of the world, that the church is called blessed because it is a peacemaker, that the church is witness both by word and by deed to the new heaven and the new earth in which righteousness dwells (2 Cor. 5:17-21; Matt. 5:13-16; Matt. 5:9; 2 Peter 3:13; Rev. 21-22).
that God's lifegiving Word and Spirit has conquered the powers of sin and death, and therefore also of irreconciliation and hatred, bitterness and enmity, that God's lifegiving Word and Spirit will enable the church to live in a new obedience which can open new possibilities of life for society and the world (Eph. 4:17–6:23, Rom. 6; Col. 1:9-14; Col. 2:13-19; Col. 3:1–4:6);
that the credibility of this message is seriously affected and its beneficial work obstructed when it is proclaimed in a land which professes to be Christian, but in which the enforced separation of people on a racial basis promotes and perpetuates alienation, hatred and enmity;
that any teaching which attempts to legitimate such forced separation by appeal to the gospel, and is not prepared to venture on the road of obedience and reconciliation, but rather, out of prejudice, fear, selfishness and unbelief, denies in advance the reconciling power of the gospel, must be considered ideology and false doctrine.

Therefore, we reject any doctrine

which, in such a situation, sanctions in the name of the gospel or of the will of God the forced separation of people on the grounds of race and color and thereby in advance obstructs and weakens the ministry and experience of reconciliation in Christ.

that God has revealed himself as the one who wishes to bring about justice and true peace among people;
that God, in a world full of injustice and enmity, is in a special way the God of the destitute, the poor and the wronged;
that God calls the church to follow him in this, for God brings justice to the oppressed and gives bread to the hungry;
that God frees the prisoner and restores sight to the blind;
that God supports the downtrodden, protects the stranger, helps orphans and widows and blocks the path of the ungodly;
that for God pure and undefiled religion is to visit the orphans and the widows in their suffering;
that God wishes to teach the church to do what is good and to seek the right (Deut. 32:4; Luke 2:14; John 14:27; Eph. 2:14; Isa. 1:16-17; James 1:27; James 5:1-6; Luke 1:46-55; Luke 6:20-26; Luke 7:22; Luke 16:19-31; Ps. 146; Luke 4:16-19; Rom. 6:13-18; Amos 5);
that the church must therefore stand by people in any form of suffering and need, which implies, among other things, that the church must witness against and strive against any form of injustice, so that justice may roll down like waters, and righteousness like an ever-flowing stream;
that the church as the possession of God must stand where the Lord stands, namely against injustice and with the wronged; that in following Christ the church must witness against all the powerful and privileged who selfishly seek their own interests and thus control and harm others.

Therefore, we reject any ideology

which would legitimate forms of injustice and any doctrine which is unwilling to resist such an ideology in the name of the gospel.

To the one and only God, Father, Son and Holy Spirit, be the honor and the glory for ever and ever.