An Invitation to the Table for the Second Sunday of Easter 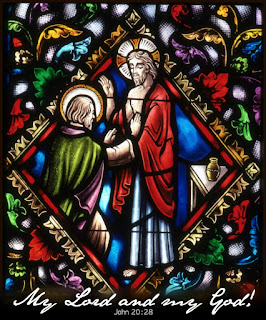 Of all the verses in the Bible, I think the one that best describes the spirituality of the average Protestant is John 20:29: Have you believed because you have seen me? Blessed are those who have not seen and yet have come to believe.

The notion that the ideal faith is not dependent on the senses is part and parcel of who we are. We’ve gotten over the most extreme forms of this belief: We have stained glass windows; we don’t mind a few candles every now and then; we’re fine with crosses; we can be exposed to a statue without feeling the need to gouge our eyes out; we can even be friends with people whose churches have incense! But at its core, our spirituality is one that is most comfortable with Show-and-Tell that excludes the Show.

The best description I can find of it is this one by Charles Spurgeon:
Spiritually it is a blessed thing to leave altogether the shores of sight and feeling, and to say ‘Good-bye‘ to inward feelings, cheering providences, signs, tokens, and so forth. It is glorious to be far out on the ocean of divine love, believing in God, and steering for heaven straight away by the direction of the Word of God.*

Having left the shore of the senses, and adrift on the sea of God’s love, the perfect faith needs no help from artifacts on the one hand, and no assurance from messy emotions on the other. Or at least that’s what our version of Christianity has tended to teach us over the centuries. The faith that needs to see and touch is the faith of Thomas: not an invalid faith, but maybe an inferior one.

But let’s remember that the faith of Thomas is a sacramental faith. So when we “Say good-bye to… signs, tokens, and so forth,” we might also be setting ourselves on a sacrament-free sea. Because what is a sacrament, but an outward and visible sign of an inward and spiritual grace. And what was Thomas looking for, but physical evidence of an article of faith (the evidence being the body and the blood, and the article of faith being the risen Lord)?

I’m hoping here that I’m answering another question—maybe not one you were asking, but at least one you should’ve been asking. And that is, why don’t people like Congregationalists and Presbyterians seek comfort from the Lord’s Supper like Episcopalians and Roman Catholics do from the Eucharist?


Perhaps it’s because some traditions like the symbolic, they like smells and bells. Others (aka ours) think that Christmas Eve candles are pushing the envelope just a little bit. Jesus pronounced those blessed who have not seen and yet have come to believe, and we feel deep in our hearts that listening should be enough. 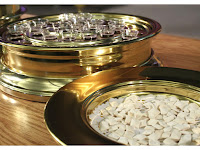 But Jesus is also the One who went under the water, and told his followers to baptize in his Name. And he also took a loaf and a cup into his hands, and told us that when we shared them with one another that we were remembering his death until he returned. Yes, Jesus commends the faith of those who came after the apostles, who believe in that which we cannot see. But he also commends to everybody’s use things that we can see and touch and taste to help our faith.

And so, if you believe in that which you’ve never seen, come to the table. If your faith is so pure that it needs no visual aids and needs no emotional assurance, this table is set for you: Come with all that faith that God created in your heart, and eat what Christ has prepared.

But if you’re not sure you believe in what you can’t see, if the news of the risen Lord sounds too good to be true, if you sometimes doubt, then you, too, are invited to the table. It is set for you: Taste and see that the Lord is good.

You see, no matter who you or where you are on life’s journey—whether your faith has found its resting place, or your faith needs a lot of help—you’re welcome at this table. If you believe in what you haven’t seen, then look at what you already know to be the body and blood of Christ. If you cannot believe until you have seen, then see the broken bread and the cup outpoured as tokens of what God has done for you and will do within you.

For when it comes to Christ, believing is seeing for those who have faith, and seeing is believing for those who need it. Whichever group you belong to, draw near with faith, take this holy sacrament to your comfort, and make your humble confession to Almighty God…

—©2016 Sam L. Greening. Jr.
*From All of Grace: An Earnest Word with Those Who Are Seeking Salvation by the Lord Jesus Christ (no pagination, year unknown). Other pertinent quotes from the tradition include Ebenezer Erskine: “Faith is the leader, and sense the follower; faith is the duty, and sense the privilege connected with it [see Eph. 1:12-13, John 11:40]. Faith is the work, and sense is the encouragement. This is God's order, which the legal heart would aye invert: we would be at the encouragement of faith, before we set about the duty of believing” (Works, Vol. 2, p. 140); Samuel Rutherford; “See the sweet use of faith under a sad temptation: faith trafficketh with Christ and Heaven in the dark, upon plain trust and credit, without seeing any surety or pawn; "Blessed are they that have not seen, and yet have believed (John 20:29). And the reason is, because faith is sinewed and boned with spiritual courage; so as to keep a barred city against hell, yea, and to stand under impossibilities; and here is a weak woman, though not as a woman, yet as a believer, standing out against him, who is "The mighty God, the Father of ages, the prince of peace" (Isa. 9:6). Faith only standeth out, and overcometh the sword, the world, and all afflictions (1 John 5:4). This is our victory, whereby one man overcometh the great and vast world” (The Trial and Triumph of Faith, p. 83); and Thomas Watson: “Assurance is more fair and lovely to look upon, but a fruitful faith God sees to be better for us” (A Body of Divinity Contained in Sermons upon the Westminster Assembly’s Catechism: 6. Assurance)