What God has made clean, you must not call profane. —Acts 11:9

Have you ever had to change your mind? I’m not talking about changing your mind and ordering the fish instead of the chicken, or taking surface roads instead of the interstate. Of course, any decision—whether it was carved in stone from the beginning or came about after an internal debate—has the potential to be momentous. But some decisions are definitely more likely to be momentous, and all of us have had to face making that kind of decision. And I think these momentous decisions are more likely than not to require a change of mind so deep that we would probably call it a change of heart.

Naturally the Bible is filled with such changes of heart. There are people who hated Jesus and came to love him. Here we can’t help but think of the Apostle Paul. And then there are people that had never heard of Jesus, but then came to know him. And that’s the kind of story Frances read to us about in today’s reading from the Acts of the Apostles.

The story actually started a bit earlier, in chapter ten. Here, in Caesaria, we meet a non-Jewish God-fearer named Cornelius who has a vision. Just as earlier we read how Saul had a vision telling him to expect a man named Ananias, even as Ananias was having a vision telling him to go to Paul, here we have Cornelius seeing an angel who tells him to send for a man in Joppa named Simon Peter. And so he sends some men to go fetch him. But as they’re on their way there, Peter himself receives a vision.

But Peter’s vision has nothing at all to do with Cornelius. Or at least not yet. Instead, Peter’s vision was of food being offered to him which was not kosher. When God tells him in the vision to eat it, Peter—probably more than a bit shocked—responds that he will not eat that food because nothing unclean has ever touched his lips. And with that, he probably thought he was in the clear; that he’d passed whatever test God was putting him to.

But the vision continues, and Peter hears the words, “Peter, what God has made clean, do not call unclean.” And this happened two more times. While still puzzling over what was happening, Peter is told that he needs to go downstairs, because somebody needs him. And so he answers the door, and says, “I’m the one you’re looking for. But why are you here?” And they tell him that a man named Cornelius—a Roman soldier who is highly thought of by his Jewish friends—wants to hear the gospel.

And so Peter goes to him and shares with him the good news of God’s grace. Cornelius and his whole household believed and were clearly filled with God’s Spirit, and so Peter baptized them and stayed there and ate with these new Gentile Christians.

When he returned to the rest of the church, they challenged him: “Why did you do that?” they asked. “Do you not know the difference between clean and unclean?” But Peter told them of Cornelius’s vision and his, and how God had specifically told him not to deny people full membership in the household of God simply because they did not come from a kosher household. Not everybody was immediately convinced that Peter was right, but the resulting Council of Jerusalem [1] decided once and for all that Gentiles could indeed be Christians.

And so, many minds were changed in this section of Acts. First of all, Cornelius’s mind was changed: he’d never heard of Jesus, but he came to be filled with his Spirit—a definite change of heart and mind. But more importantly for us, Peter had a change of heart which allowed those of us who are non-Jewish to be part of the church, and allowed us to eat bacon. Both of these involve a change of heart that is very important to me, and I think many others.

Most of us probably acknowledge without too much argument that this little section of scripture matters. It opened the church to Gentiles while at the same time making church potlucks a lot more interesting (and tasty). But it’s less likely that we can see any relevance beyond that.

But think about the times you’ve had to think long and hard before changing your mind—the times when you have, in fact, had a change of heart. We reserve this expression for only the most important changes, and very often these changes are made when our prejudices and assumptions come up against a reality that seems to contradict them.

The first generation church was filled with people who naturally assumed that dietary laws were eternal, and that in order to become a Christian a person had to first become a Jew. The Bible tells us that Peter’s mind was changed supernaturally, though skeptics have attributed his change of mind to the fact that he was extremely hungry that day. Alexander Maclaren had this to say on that topic:

It does not follow that the vision was only the consequence of his hunger, as has been suggested by critics who wish to get rid of the supernatural. But the form which it took teaches us how mercifully God is wont to mold his communications according to our needs, and how wisely he shapes them, so as to find entrance through even the lower wants. The commonest bodily needs may become avenues for his truth, if our prayer accompanies our hunger. [2]

Perhaps it was a different hunger that caused the faithful to pray at the Council of Jerusalem—a hunger to see the gospel spread to all nations. But whatever accompanied their prayers, there was a change of heart in the early church regarding what was clean and what was unclean. 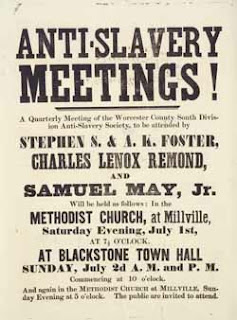 Over the centuries, the church developed customs and liturgy and a form of government that seemed unassailable. Yet throughout medieval times there were those whose vision led them beyond what they’d been told. They searched deeply and their hearts were changed. By the Eve of All Saints Day 1517, the changes felt by individuals and small communities caught on like wildfire, and the resulting Reformation was at least as consequential as the Council of Jerusalem almost fifteen centuries earlier.

Jumping forward 350 years, I think we’re all familiar with another change of heart. Just as the earliest Christians were steeped in scriptural traditions that made dietary laws incontrovertible, and which separated Jew from Gentile, God’s chosen from the heathen, people in our nation were equally as steeped in scriptures that made slavery a part of the created order, with its own set of supposedly divinely ordained rules. Abolitionists who challenged these rules were hated by nearly everyone, and slaves who refused to submit to them were punished viciously. Now nearly everyone agrees that to believe as so many did back then was wrong—barbaric even—because society has had a true change of heart.

And even in our day, not that long ago at all, when people were asked if there should be marriage equality for same-sex couples, the vast majority said, “Of course not.” And one of the main reasons for this, of course, would have been deeply ingrained words from the Bible and our assumptions about what they mean. But now when asked the same question, an overwhelming majority responds a different way. In less than a generation we have gone from a clear majority rejecting marriage equality to a clear majority embracing it. Even less than a decade ago, most politicians considered it political suicide to say they believed marriage equality should be the law of the land. Today, many go out of their way to make it clear that their support for that very thing is as firm as the Rock of Gibraltar.

These things that seem to be national—or even global—changes in the assumptions we make are not the only kinds of change of heart that we experience. Much closer to home and much more personal are our personal transformations. And I hope we’ve all had to make them. To be honest, I don’t think it’s possible to be a Christian without them. Before the first Congregationalists left Europe to come to North America aboard the Mayflower, they didn’t come empty-handed. Among the things they brought with them was a letter from their pastor who couldn’t make the journey. He told them, “The Lord hath yet more light and truth to break forth from his word.” It was true then and it’s still true now.

People think that those who meditate on the scriptures are stuck in the times in which they were written. But it is precisely those who studied the Bible and prayed the psalms who began to see that the dietary laws (no longer) reflected God's will for the world, who brought about the Protestant Reformation, and who said No to slavery. In all three instances, even the majority of Christians rejected innovation. But other Christians’ hearts were changed, and that change led to societal change. And even in more recent times when we think that religious leadership is a thing of the past, the United Church of Christ pushed for marriage equality before just about anybody else, religious or secular, all the while quoting Pastor John Robinson’s words to our spiritual ancestors: God has yet more light and truth to break forth from the Word.

Every family in this church has probably gone through something akin to what the first century family of Christ dealt with when they were forced to redefine clean and unclean. What did you once reject that you have since come to accept? When have you had a change of heart that, despite earlier judgments and knee-jerk reactions, has enabled you to truly love a friend, or a son or daughter, or a brother or sister, or even a parent?

I remember a woman in a church I served soon after I left seminary who openly worried that her biracial grandson wouldn’t have a future. That same kid—now a married father of two—is an army officer whose commander-in-chief is himself biracial. I know so many people who have gone from struggling to accept a gay brother or lesbian sister to being able to celebrate at their sibling’s wedding. I know people who have moved from holding the transgender community in derision to changing the pronoun by which they refer to a beloved child.

We can find scriptural evidence to be against just about any religious or societal change that comes down the pike. Some of that scriptural evidence is pretty slim, but some of it’s extremely compelling. But more compelling still is Peter’s vision of God’s acceptance of that which was once rejected, and Cornelius’s acceptance by the Holy Spirit, and—perhaps most compelling of all—something found in the gospel reading appointed for today; and with these words of Jesus I will end my sermon: