'But for the Grace of God' 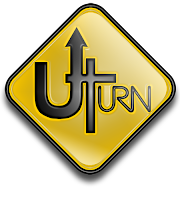 The word of the day is repentance. It’s talked about a lot more in the Bible than it is in church. At least in this church. Though I doubt I talk about it more than once or twice a year, I’ve still had people literally quit the church after a sermon on repentance. But after hearing that passage from Luke just now, it’s gonna be pretty hard to ignore the subject at hand.


IA. Change on the Inside


Though the idea of repentance is in the Hebrew Bible, we usually associate it with the New Testament. And the first time it’s spoken of in the New Testament, it comes out of the mouth of John the Baptizer. He’s calling on people to change their hearts or (more literally translated) to change their minds, that is, to think about things in a different way, or to have a different attitude toward the surrounding world.

John had a very good reason for saying this, because the exact quotation from Matthew 3:2 when he first speaks of repentance is, “Repent, for the kingdom of heaven has come near.” It appears that John thought he was predicting that the coming of heaven would shatter the earth, that it would be a day of wrath; that it would force its ways on the world; that it would reward the good while punishing the bad.

What was actually on its way, of course, was something that couldn’t really be comprehended by unchanged minds or loved by hardened hearts. And so, John’s call to repentance was an all-purpose call—it would work in the face of the wrath of God, but it would actually work even better if the coming kingdom was a lot more subtle.

First of all, he was calling on most people to change the way they saw or perceived God’s work in their midst. They needed a change of mind or heart—which is what the word repentance means in Greek. When this happened, their actions would match their thoughts and feelings. But the message changed a bit when John spotted some others in the crowd.


IB. Change on the Outside

Though we often speak of the Pharisees and the Sadducees as though they’re part of the same movement, they were actually two distinct groups who opposed each other on some key issues. [1] But regardless of their differences, there were both Pharisees and Sadducees who came to hear John preach and even to be baptized by him. To them, John’s message was not “Repent,” but rather, “You brood of vipers, who told you to repent?”

It’s almost as though John is acknowledging that their hearts and minds are already where they should be. In other words, they know in their hearts what God’s ways are like, and they have the knowledge it would take to live according to God’s will. What they lack is the will to act. “Bear fruit worthy of repentance,” John tells them, “and quit claiming that your heritage makes you better than others.” In other words, “You already know the truth. Now show on the outside what you know on the inside, because your pedigree won’t cut it in the kingdom of God.” [2]


II. An Evening Out


And so we have John the Baptizer telling the crowd to change their hearts and minds, but telling the religious leaders to show on the outside that their hearts and minds have already been changed. And this brings us to the reading we heard a few minutes ago from Luke in which two people went to the temple to pray: one a respected religious leader, and the other a collaborator with the enemy. The first thanked God that he was better than others and that he obeyed the law. The second said simply, “God, have mercy on me, a sinner.”

I don’t know if he was thinking of this passage when he wrote it, but there’s a wonderful poem by C.S. Lewis that I want to share with you. It’s called The Apologist’s Evening Prayer:

From all my lame defeats and oh! much more
From all the victories that I seemed to score;
From cleverness shot forth on Thy behalf
At which, while angels weep, the audience laugh;
From all my proofs of Thy divinity,
Thou, who wouldst give no sign, deliver me.

Thoughts are but coins. Let me not trust, instead
Of Thee, their thin-worn image of Thy head.
From all my thoughts, even from my thoughts of Thee,
O thou fair Silence, fall, and set me free.
Lord of the narrow gate and the needle’s eye,
Take from me all my trumpery lest I die. [3]


When we read the passage from Luke, I think one thing we’re in danger of is making a virtue out of being a sinner. Of course, Jesus came to call not the righteous but sinners to repentance. [4] And so when we read that God will lift up the humble and humble the exalted, I don’t want us to read it as though there’s still a pecking order, but the pecking order has simply been reversed. When we justify margins—whether on the right or the left or both—we even them out, placing every line at an equal distance from the edge. And that’s what the prophet was talking about when he said that every valley would be lifted up, mountains and hills be made low. [5] He wasn’t saying that the valleys would be above the hills or the mountains lower than the valleys. He was talking about an evening out.

And so it shouldn’t surprise us that, at the end of Jesus’ parable in Luke 18, the sinner left the temple on a higher plane than he entered it. He was willing to humble himself. And if the righteous person left unjustified, it was because he didn’t want to be justified. He didn’t want to be on the same level as the sinner. Because he thought he deserved the mountain view, he didn’t know how to live in the valley.


III. But for the Grace 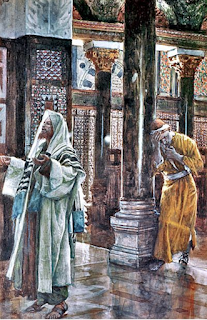 And so, whether we’re on the mountain or in the valley, the one thing about repentance we need to know is that it is a gift of God. It’s something we need to do, yes, but unless the Spirit of God within us brings it to our attention, then our hearts and our minds will never be dissatisfied with our current condition.

In the case of the Pharisee in the parable, he was completely self-satisfied. He acknowledged that God had made him who he was, but apparently he thought that’s all there was; he need not change. The tax collector, on the other hand—this man who made his living by preying on the helpless and the poor—he entered the temple with the God-given hope that there was more. Money wasn’t doing for him what he thought it was. Even with the power of the Roman authorities backing him up, he knew that, in the grand scheme of things, he was an unimportant little man. He had nothing else to bring to the temple than a plea for God’s forgiveness.

We should pray, therefore, for a desire for repentance. We should ask God to show us where our hearts and minds are in need of renewal, where there is need for change, where our pride needs to be brought down, and where, even, our false humility needs to be lifted up. We shouldn’t look at wrongdoers as examples we should follow in order to be justified, unless those wrongdoers can show us the way to true repentance. It’s okay to be thankful if the change within us is already underway. But our gratitude should be that God’s grace is at work, not that we are somehow better than others because of our own power to change ourselves. 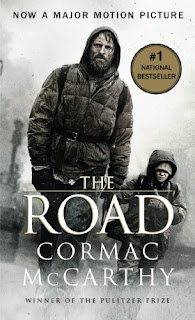 I just finished a dystopian novel called The Road by Cormac McCarthy. In it, an unnamed disaster has befallen the earth, and a little boy and his father are on the move. They’re starving much of the time, and most of the people they encounter are very scary. But one day they come upon a very old man, dressed in filthy rags. Much to the father’s chagrin, the little boy offers the man some of their food. And because his son offered it, the father was compelled to share. But later he tells his son, “When we’re out of food, you’ll have more time to think about it.”

Repentance is not a one-size-fits-all concept. No two people need to repent of the same things. But more importantly, there’s a difference in repentance that leads to faith and the repentance of those who have faith. In the example of the little boy and his father, the father knew that he was going to be sorry that he ever shared his food with the old man. And let’s not be too hard on him: his concern wasn’t that he was going to go hungry because of it, but that his son was going to suffer. But the little boy would remember the same event with gratitude that he’d shared his food with the hungry.

The old man, the little boy, and the father each experienced the same event, but each would remember it a different way. Their prayers, therefore, would each need to be different.

But that saying can also be translated as “The kingdom of God is within you” …as long as we remember that the Greek word means within y’all, and not within us as individuals. If our hearts and our minds have changed, or if we know that we are even now undergoing transformation, [7] than our prayer needs to grow from “change me, O God,” to “help my life show the world that I know the difference between your values and the world’s.”
—©2016 Sam L. Greening, Jr.
NOTES