An Invitation to the Table for World Communion Sunday

I had a weird experience this week. It’s kind of unique to me, I think, because I have my own way of dealing with telemarketers. They used to just make me angry… and they still do when I get a recording. But when it’s a real person, I’ve moved on. Now, that’s not to say that the telemarketer doesn’t get angry at me, because sometimes they do. But usually it’s a draw. That’s because when a live person tries to sell me something by calling me on the phone, I want to talk to them. But not about whatever it is they’re selling. I just want to be friends with them.

This is actually difficult for me, because I’m a natural introvert. And so I’m not very good at it. It just seems like a more “Christian” strategy than just hanging up or yelling at somebody who’s just trying to put bread on the table. I have to say I haven’t made a single friend. Some people are bemused, some are patient, but some (ironically enough) just get downright angry at me for wasting their time. But the other day I feel like my strategy finally paid off.


The phone rang and my caller ID said it was a Sacramento number. I answered it, and it was somebody named “Victor” trying to sell me the services of a contractor in my area. What area is that? I asked. And he told me that the contractor was in my area. This was going nowhere, so I asked if he was calling me from Sacramento. He told me that, yes, the company was registered in California. “But where are you?” I asked, and he told me he was in India.

He said it as though it was an admission, but I said, “Oh, where in India?” And he said Mumbai.

“Is that your hometown?” I asked.

“Manipur,” he said, “in the northeastern part of the country.

“Oh, that’s really interesting,” I said. “Aren’t some states in that part of the country mostly Baptist?”

He was quiet for a second, then he told me that he was Baptist, so I told him I was a pastor. He didn’t seem too disappointed when I told him I was Congregational. Instead he told me about his baptism. Then he gave me a little bit of the history of Christianity in that part of India, how a man named William Pettigrew came from the United States over a century ago and preached the gospel. “Victor” hoped to establish himself financially in the big city and return home to help his family and do church work.

The (very out of context) biblical phrase that was going on in my head at this point was from the 42nd Psalm: “Deep calls to deep.” [1] Across the oceans, two holy callings recognized each other, and grace in him that had been given in Christ Jesus before the ages began spoke to that same grace in me.

Victor gave me his email address and we’ve exchanged a couple of lines. He told him his real name. It’s a difficult one for me. But a chance meeting with an Indian brother in Christ a few days before World Communion Sunday reminded me that Christ is the meeting place of all Christians. In Christ we recognize one another. In Christ we have communion with one another.

But Christ isn’t the only meeting-place in the Christian church. Each Christian is also a meeting-place. And I think we get a glimpse of this in this morning’s epistle reading. Join with me in suffering for the gospel, the writer says, relying on the power of God, who saved us and called us with a holy calling, not according to our works but according to his own purpose and grace. This grace was given to us in Christ Jesus before the ages began.

That last part’s important. There’s something God-given in us that didn’t appear the hour we first believed, nor was it planted in us at or baptism or birth, nor was it passed down to us from our ancestors. It’s been there since the beginning—not our beginning, but the world’s beginning. And just as it is God-given, it is also called forth by God. It’s that part of us that responds when we encounter the word. And it’s the part that responds—perhaps with budding curiosity, or maybe even excitement, when the news of God’s love, the promise of God’s forgiveness, the invitation to the beloved community are first heard. 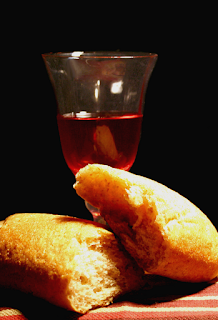 We are each of us the meeting-place where the call of God which is only lately heard meets up with the grace of God which was implanted within us before the ages. You and I are where God’s call to us meets God’s intention for us. Christ is where you and I recognize in each other our response to that call. And this table is where all this is acknowledged, in the breaking of the bread and the sharing of the cup.

We don’t really believe here that there’s a physical transformation in the bread and the wine. But just because it’s spiritual doesn’t make the transformation any less real. In most cases, our bodies don’t really respond to the grain of the field and the fruit of the vine in such small quantities. And so those who come to the table expecting a miraculous change based on what we eat and drink are usually disappointed. When Christ spoke to the crowds about eating his body and drinking his blood, those who understood it physically couldn’t get away from him fast enough, so shocking were his words. But those who stayed, those were the ones who knew that Jesus was speaking about the word. Their spirits responded to his Spirit when he told them the truth of the ages.

So this morning we're thinking about what it means to be a meeting-place:
So come to yourself; come to Christ; and come to the table. No matter who you are or where you are on life’s journey, God will meet you there, and you’re welcome here, where we can all meet God together.
—©2016 Sam L. Greening, Jr.
NOTES