The Gift of Easter

Listen to the MP3, or read below:

For you have died, and your life is hidden with Christ in God. When Christ who is your life is revealed, then you also will be revealed with him in glory.
—Col. 3:3-4


A great deal is lost in time of war—lives, livelihoods, innocence, and beauty. Entire cities can be destroyed. One example is the city of Dresden, Germany, which was destroyed in February 1945. Its most beautiful church—the Frauenkirche—wasn’t completely rebuilt for 60 years. Its counterpart, the Coventry Cathedral in England which had been destroyed five years earlier, remains a bombed-out shell to this day.
Not all war stories are stories of the destruction of beauty, however. There are some amazing stories of its preservation. And one of my favorites is about the cathedral in the French city of Chartres. This cathedral’s windows are among the most famous in the world. One historian wrote about its beautiful rose window in this way:

One becomes, sometimes, a little incoherent in talking about it; one is ashamed to be as extravagant as one wants to be …the limpidity of the blues; the depth of the red; the in-tensity of the green; the complicated harmonies; the sparkle and splendor of the light… 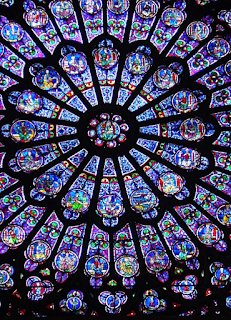 So I think we can understand that the thought of their destruction sent the citizens of Chartres into action. It’s said that during each of the world wars, the windows were dismantled. Each piece of glass was labeled, and hidden deep in underground mines. And when the winds of war had finally passed, each piece was brought back out as though it were a priceless gem, cleaned, and carefully returned to its designated spot in a cathedral window. [1]

To me, this is not just an Easter story, but an Easter story that we need to hear. For we live fragmented lives. I don’t know if our ancestors could even understand the lives we lead. Our freedom and our prosperity seem to have scattered us to the four winds. We live in one place and work miles away. Our life partners go to work miles in another direction, while our children—if they’re still at home—go to two, sometimes three or four different schools. If not, then part of us belongs to children in another city, sometimes thousands of miles away. And if we have living parents, then another piece of us belongs to them, often just as far away. Our hobbies take us someplace else. And sometimes, sadly, too much of us belongs to a bottle or some other master that we wish weren’t part of our lives. We live with our pasts and worry about our futures. And often far down on the list of places and things that claim us is the church and the faith that it imparts. 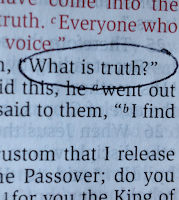 And speaking of faith… if we are blessed enough (as, I admit, pastors generally are) to be able to devote the greater part of our lives to it, we are still fractured. Jesus said that his principle purpose was to testify to the truth, and that if we belonged to him we would hear him. But with Pilate, we can’t help but respond, “What is truth?” [2] We are constantly presented with different versions of it, for each church has its own. There are theological differences, there are differences in liturgy and ceremony. and these days there are huge difference in teachings on social issues from church to church. What, indeed, is truth?

Whether we speak of our everyday lives or our faith (and the fact that we too often think of them as separate things is further evidence of what I’m talking about) it’s as though we have been spiritually dismembered. When you put it this way, it means a great deal more to say that, in his crucifixion, Jesus made us whole again. For somehow, long before we were even born, he re-membered us. When he held out his arms on the cross, he invited us into his embrace. That’s what Paul means when he says over and over (including in this morning’s passage) that we have died, that we have been crucified with Christ. [3] He put an end to our brokenness, and like that glorious cathedral window after a great conflict, joined the different pieces together into what God intended all along.

So let’s think again about what it means

that the Lord Jesus on the night when he was betrayed took a loaf of bread, and when he had given thanks, he broke it and said, ‘This is my body that is for you. Do this to remember me.’ And that in the same way after supper he took the cup, and said, ‘This cup is the new covenant in my blood. Do this, as often as you drink it, to remember me.’ For as often as you eat this bread and drink the cup, you proclaim the Lord’s death until he comes. [4] 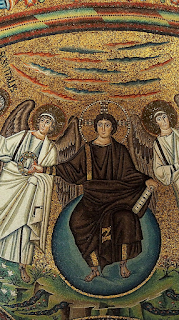 When invited to the table, we’re asked to remember the One who re-membered us. In the simplicity of the bread, the bits and pieces of our lives that lie scattered in so many places that we often feel lost are brought together. In the essence of the wine our broken spirits made complete. And yet our wholeness is only truly whole when we eat and drink together, for we all partake of the same loaf, and we all drink from the same cup.

Perhaps we can’t at this moment see who we really are, but we have faith that when Christ is revealed in his risen glory, our lives, too, will shine with his brightness—perhaps the fragments will still be seen, but instead of confusion they will form a glorious Image of the Crucified One, in whose Image we were created in the first place.

So no matter who you are, or where you are on life’s journey, you’re welcome at this table. Come in your brokenness, and receive the true gift of Easter, which is the return of your lives, not in the pieces we now experience, but in the wholeness of the risen Christ.
—©2017 Sam. L. Greening, Jr.
NOTES