IA. From Genesis to Exodus


There have been a couple of expressions that I’ve had to eliminate from my vocabulary lately. One had to be eliminated specifically because I moved to Huntsville, Alabama. When I’m trying to explain something that’s really simple and the other person wants to make it into something much more complicated than need be, I’ve always been fond of saying, “It’s not rocket science.”

This expression takes on a whole new meaning when I’m talking to an actual rocket scientist, so I’ve found that it’s probably best not to use it at all.

Another one is probably something that’s unique to me. I don’t know why, but I’ve always found the opening verse of today’s Old Testament reading to be very compelling.

Now a new king arose over Egypt, who did not know Joseph. —Exod. 1:8

One little sentence that says so much. It speaks of a rich past that is nonetheless unknown to one of the main characters in a story. And the story is the story of Israel’s exodus from Egypt—perhaps the theological centerpiece of Hebrew scripture. How did Israel wind up in Egypt in the first place? Well, one of the longest narratives in the entire Bible is about how that happened, and it’s the story of Joseph. Joseph was a Hebrew who was sold by his jealous brothers to a slave caravan. He ended up in Egypt, and there, because he could interpret dreams and use his wisdom to help others, he became one of Pharaoh’s most powerful ministers.

So powerful and so wise was he, in fact, that he helped Egypt avoid a seven-year famine that had people in all the surrounding countries starving to death. And these other people included the very brothers who sold him, and who later came to Egypt to buy grain, not knowing that it was their own brother whom they were negotiating with.

When Joseph told his brothers who he was, they were (naturally) quite frightened. They had done him a horrible wrong, and they had earned his vengeance. But Joseph took another view—one that I think was best described by the Apostle Paul centuries later in his letter to Rome:

We know that all things work together for good for those who love God, who are called according to his purpose. —Rom. 8:28


You see, Joseph did not hold what they did against them, having long ago decided that his presence in Egypt was the will of God, who years earlier had found a way to provide for Jacob and his sons when they would otherwise have died of hunger.

So beloved of Pharaoh was he that Joseph’s family was given an entire region of Egypt to live in—a place called the Land of Goshen.


We don’t know how much time had elapsed between the end of Genesis and the beginning of Exodus, but if we take it at face value, it must’ve been centuries. For this one family had grown into a nationality of what must’ve been hundreds of thousands of people. Another way of looking at it is that, yes, time did pass, but it wasn’t enough time for a single family to grow that much. Instead the people Exodus describes might well have been a diverse group of slaves that had gathered to the promises of God and identified with Jacob’s descendants spiritually, even if they weren’t descended biologically. 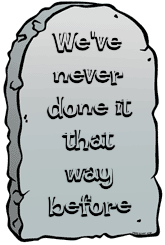 That’s a point of some interest, but it’s really not all that relevant. Because this story is more theology than history, and when we get to the point that a new king arose over Egypt, who did not know Joseph, we realize what this means: The story of how this group of people had ended up in Egypt in the first place had been lost; the respect for them was gone; they were no longer guests in the land but a threat.

Which sort of brings me to how I remember this line. As a pastor, I often encounter the seven last words of every congregation, “We’ve never done it that way before.” The pastor—especially the interim pastor—is sort of plopped down into the middle of a community that has all too often formed itself around those very words, and the pastor has to move forward in ignorance. Many of the things a church does are done for reasons that have been lost. And if they haven’t been lost to everyone, they’ve almost always been lost to the new pastor. And so, I am fond of responding to any such situation with the words (almost always spoken to myself), “I do not know Joseph.” In other words, we’re living in a new reality. The stuff we used to assume needs to be reëxamined, and it may be time to change the way we’ve always done things before.

That’s a great message for a church during its interim between settled pastors. Though I think it’s probably a bit arrogant to say that there’s a new pharaoh in town who never knew Joseph, there’s still a grain of truth to that saying.


But there’s another way of looking at this phenomenon that I think might be even more important to all of us who call ourselves followers of Jesus. We all have a history, and most of us are pretty intimately acquainted with our own stories. No matter how well somebody knows us, they don’t know our story as well as we do. They don’t know what impact an event or a story or even a single word might have on us. And most of the time, we don’t actually tell them.

In other words, whatever history lies behind us, chances are that the person we’re dealing with didn’t know us way back when. And even if they did, they don’t know all of our story. And even the parts they do know, they don’t understand what this situation or that event meant to us at the time. They don’t know Joseph. That part of our story has been forgotten by those around us. And sometimes that’s because we never let it be known in the first place.

And so we need to be understanding. Yes, the Pharaoh of Exodus had every intention of treating Israel badly because he felt threatened. So to say we need to be understanding doesn’t mean that we should accept cruelty. But most people who don’t know Joseph aren’t Pharaoh and don’t intend to be cruel. They simply don’t know our history and can’t comprehend what makes us tick. They don’t know what brought us to our place in life, and so when we feel hurt or offended by a comment or a story or a word, it’s often up to us to explain why. And if we choose not to, we should know that that’s a decision we’ve made. In the end, we have to admit that we have more control over our hurt feelings than we’re sometimes willing to admit. When Pharaoh did not know Joseph, Joseph rose up and made himself known. When others don’t know us, we also have that choice. And that puts the ball in Pharaoh’s court.

But sometimes we’re Pharaoh and it’s we who don’t know Joseph. Just as people don’t know our whole story and can’t completely understand what makes us tick, so we don’t know other people’s stories, and can never really understand what makes them tick. The attitude we should adopt toward people was best expressed in the 1890’s by a Scottish minister named John Watson: Be kind, for everyone you meet is fighting a hard battle.*

We’ve probably all heard that bit of advice, but think of how different our days might look if we remembered it in difficult situations:

If the driver who cut me off remains nothing more than an inconsiderate jerk in my mind, then I’ll probably go through the rest of the day complaining about what happened to me on the way to the office. But what if I knew his son was having stomach pains and he was rushing him to urgent care? I would probably spend the rest of the day lifting him up in prayer.

If the woman at the DMV seems impatient, think of the stories I’ll be telling everybody about how rudely I was treated every time the conversation turns to complaining about civil servants. But what if I knew she’d had some tests done and was waiting to find out if the tumor they’d found was malignant? I doubt I’d be telling other people how horrible she was.

In just about every situation—especially ones when our kneejerk reaction is to be angry or judgmental—we can think of ourselves as someone in a position of power and the other person as someone whose history we don’t know but whose day we can transform if we only knew what action to take or what we might say. If this is the case, what would be a good thing to do? It’s a difficult question, but God

has told us what is good; and what does the Lord require of you but to do justice, and to love kindness, and to walk humbly with your God? —Mic. 6:8

We say we’re followers of Jesus, but in this one thing, we often fall short. For what happened when Jesus was tired and grieving and bothered by people? He might’ve lashed out in anger or frustration and told them to leave him alone, but in so many cases,

when he saw the crowds, he had compassion for them, because they were harassed and helpless, like sheep without a shepherd. —Matt. 9:36

In so many instances we feel ourselves powerless and at the mercy of the people we encounter each day. If they could only put themselves in my shoes, we think, they would understand, and oh how much easier our lives would be.

But they also have lives. The receptionist whose accent we can’t understand, the unsmiling waiter, the cashier who made a mistake—they only have the power over us we give to them. If we think of ourselves as the new Pharaoh and of them as the Joseph whose stories we don’t know, then the tables are turned. We may not literally be Pharaoh, we may not have real power, but it’s probably the case that God has chosen us that day to make a difference. So

As God’s chosen ones, holy and beloved, clothe yourselves with compassion, kindness, humility, meekness, and patience. —Col. 3:12

In other words: Be kind, for everyone you meet is fighting a hard battle.
—©2017 Sam L. Greening, Jr.

*Though for reasons unknown this quote is usually attributed to "Plato" on the internet, its originator was John Watson under his pen name Ian MacLaren, probably in 1897.