An All Saints Invitation to the Table 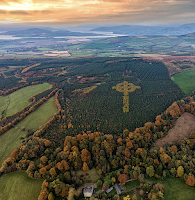 Not too long ago, airplane passengers flying into a small airport located in Northern Ireland began to notice something beneath them in the forest. There was an outline of something in the trees. It wasn’t always so striking, because the colors didn’t always stand out. But this year, when October rolled around, there was no denying it. In a woodland otherwise made up almost entirely of spruce trees, a different kind of tree—thousands of them!—had been planted. But the planting wasn’t done haphazardly. It was done very intentionally in the shape of an almost perfectly formed Celtic cross. The scale of the cross—over 300 feet long and over 70 feet wide—is so enormous that it cannot be perceived from the ground. Only from the air is it now visible. And because it’s autumn, the difference between the dark green spruce and the golden larch is breathtaking.

But you know what’s really weird? Nobody knew it was even there until just recently.


The cross was planted by a forester named Liam Emmery on the Irish Republic side of the border. But not long after he finished his work, he had an accident. After a time of suffering, he died at just 51 years of age. And though his wife knew something of the project, it had slipped her mind—understandable with all the family ahd been dealing with. But nobody else had heard anything about it. And so it wasn’t really until the cross appeared in all its glory, and people began noticing it, that his widow, Norma, realized what her husband had actually done. “Liam was in an accident,” she told a TV reporter, “and he was unwell for two years, and he had suffered brain damage; so that’s why, I suppose, I had forgotten about the plantation, because if he was here, we’d all have heard about it, because he would’ve been so proud.”

Mr. Emmery created something made of living seedlings that will grow for generations. It will be seen specifically as a cross by people looking down on it from above. They will know beyond the shadow of a doubt that this was an intentionally created Christian symbol. But the people who experience it from the ground: they’re going to walk among the trees growing in the forest; and though they may note that in one area spruces are growing while in another area there are larches, they’ll know nothing of the cross that they’ve suddenly become a part of—that’s surrounding them and shading them and providing them with a peace that is beyond their understanding. [2]

Could there be a better metaphor Christian discipleship? And could there possibly be a better story to call us to the Table on All Saints Sunday? For what are saints, but those who lived among us, planting seeds that grew into harvests that they never got to enjoy? We are surrounded by what they did for us, for God’s Realm, and for the world—so much so that, more often than not, we aren’t even aware that it’s the fruits of their labors that we’re enjoying.

Here on earth, we toil and worry and suffer, and all too often we feel like we have nothing to show for it. We may see an occasional change here and there. But often, even then, we’re not entirely sure if we’ve made any difference at all, because change happens so slowly so slow. Like the cross in the forest, it may only be from above that we’ll able to see the beauty of what was planted, and the lasting change that came about because of a lifetime of planting seeds.

I think of this every time I see the lawyer commercial that starts out, “Pain, suffering, medical bills—all just frogs on a lily pad in a lake of pain." Too many times, we ask ourselves, Why bother? And other times, we miss those who have gone before us. But what we need to do is to remember that just about every blessing we enjoy in life has come to us as the fruits of seeds planted by others, usually others we no longer see, and sometimes people who preceded us by decades or even centuries. Some people call life a veil of tears. But near the end of the Bible, we read that there will come a time when God will wipe away every tear from our eyes.

And so our invitation to the Table today is a bit different. As Christians, we believe in the communion of the saints. This means that all believers around the world gather at the same table at the same time. And not just around the world, but the saints of the past and the saints yet to be born are all present with us, too. Most of us remembered to set our clocks back an hour last night, but here, now, our clocks no longer work, for the Lord’s Table exists outside of time, and it cannot be confined by space.

So come today in thanksgiving for seeds that have been planted, filled with faith in what those seeds will become, hope that we may be part of their growth, and love for those who in the strength of God did the planting. For when a follower of the Crucified One plants a seed, it may look like healing or giving or justice or love or teaching or praise or preaching, but in reality, what we are sharing with the world is the cross of Christ. 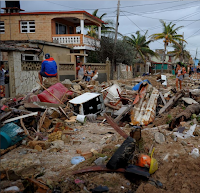 Down here at ground level it may seem like chaos sometimes. It may seem futile. It may seem to lead to little or nothing. I lived in Puerto Rico for three years, and when I see what’s happened there, I am tempted to despair. But I can’t forget that people are even now planting seed that are bearing fruit almost immediately, while others will only grow in God’s time. Our little rummage sale to benefit victims of Hurricane Maria yesterday is an example. What can our contribution do in the face of such need?

But someday we’ll fly over the island, look down, and see not an enormous cross, but rebuilt homes and hospitals, and people enjoying the fullness of life once again.

This is possible because the life of Christ also made little sense to his followers, and his death seemed so pointless. But after the resurrection, they saw the glorious story of his life, death, and resurrection of Jesus being told in each act of giving, in every instance of pain, and in every victory—great or small. And still today, in every life and in every death, in every blessing and in every disaster, it is the cross that is being lifted up.
—©2016 Sam L. Greening, Jr.
NOTES