A child stood on his seat in a restaurant,
holding the railing of the chairback
as though to address a courtroom,
"Nobody knows what's going to happen next."
Then he turned and slid back down to his food,
as relieved and proud to speak the truth,
as we were to hear it. [1]

What a good message to end the year with, regardless of a person’s faith. The end of December is a time of looking back: remembering and evaluating, rejoicing and
mourning. A lot happened over the course of 2017 and there’s much to think about. Much was begun and some things came to an end. But though we know what happened over the past twelve months, nobody knows what’s going to happen in 2018.

Far from being a negative, the mystery of the future is one of the things that makes life meaningful… in fact, I’d go so far as to say that, the more we know about the future, the less meaningful the present becomes. 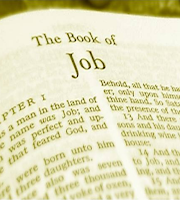 There is an enormous gulf between humanity and divinity, and nothing makes this gulf seem wider to us than the concept of the future: To us, the future usually seems to be something unknowable; to God, it is something that has already happened. The concept of time is no less a creature of God than you and I are. And so there is no time—past, present, or future—that is not present to God and within God, for God has already created it.

Nowhere in the Bible are the differences between Creator and created more fully laid out than in the Book of Job. Job and his friends fill many pages with their personal philosophies. They’re all quite sure of what makes the world tick. Until finally, God appears to have had enough, and begins the divine response with the question, “Where were you when I laid the foundations of the earth?” [2] God continues speaking, asking Job and company if they know where future snows are stored, if they can control the courses of the stars and the constellations, or understand the life cycles of wild animals. [3] 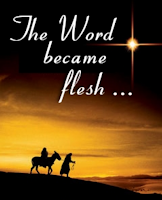 God’s Word is something entirely different. The Hebrew creation narrative is an account of God speaking, and that-which-was-not coming into being. The New Testament counterpart of that narrative is the Prologue to John’s Gospel, which states that the Word existed in the beginning with God. And God’s Word was with God and God’s Word was none other than God. Everything that ever came into existence came into existence through God’s Word. “And,” as John told us, “the Word became flesh and dwelt among us, and we have seen his glory.”

During Christmastide, we celebrate the fact that the gulf was bridged: the Word became Flesh, God became Human, the Mystery became the Solution.


III. Jesus Is the Answer (or at Least the Response) 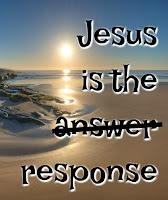 We often get frustrated in our relationship with God, and a lot of this has to do with the uncertainty of life. Intellectually, we know that we can always turn to the Creator of all things, no matter what’s going on. But there are too many times when that’s not enough. We don’t just want someone to turn to for comfort, we need someone we can turn to for answers.

Of course, as I mentioned a few weeks ago, many people are fond of saying, “Jesus is the answer.” And though I am often troubled by that platitude, in a way, I suppose they’re right. But Jesus is God’s answer not to all the questions that plague us about why the past was what it was, or what will happen in the future. Jesus is a response to an accusation that we humans make against God; that being, You just don’t understand what it’s like to be stuck in the human condition.

When the Word became Flesh and lived among us, he did not do so as an omniscient, all-powerful divinity, but as One who didn’t know what the future held, and who was as dependent on the good will of those around him as we are, and all-too susceptible to the ill-will of those who didn’t want him around. There are a lot of people who look to his words in order to predict the future, but he made it clear that his mission was not to be a fortune teller. And concerning the passing of heaven and earth, he made it doubly clear: “About that day and hour no one knows, neither the angels of heaven, nor the Son, but only the Father.” [4] 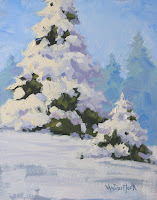 As one year ends and we prepare for another to begin, let us remember that the Word did become flesh and did live among us. Like us, he was vulnerable to those around him; and like us, he could not predict the future. This doesn’t mean he was ignorant of the cross. But many ordinary humans are aware of a fate that likely awaits them—good or ill—if they do their duty and continue down the road they’re on.

One of the great joys of human existence is the simple message of the little boy at the beginning of this sermon. We make our plans and we try to exert as much control on the future as possible. But we can never know exactly what’s coming down the pike. Two images that evoke responses in humans are new-fallen snow, through which no vehicle has driven nor living being walked; and a smooth beach just after the tide’s gone out, the sand glistening in the morning sun, unmarked by a single footprint. We see beauty in that kind of pure potential in nature, and recognize such beauty in a new baby, a new relationship, a new job, a new business. Though we can often look back on the past with fond memories—or even satisfaction—to look to the future with true innocence is one of the greatest things about being alive.

Though I think most of us are looking forward to a new Year of Our Lord, I know not everybody is. There’s a lot to look forward to, but I know there are also some things to dread. But because of the Incarnation, because of the Word-Made-Flesh, each of us can move ahead with the knowledge that God-Is-With-Us, for when Isaiah promised us that one of Messiah’s Names would be Immanuel, that’s what he was saying. It’s true, nobody knows exactly what’s going to happen next. But this is also true: Whatever happens, we won’t have to face it alone. God will be by our side, whether in calm or in laughter or in tears, and that’s because, on Christmas, God became one of us.
—©2017 Sam L. Greening, jr.