We’ve all played telephone at some point in our lives—you know, that game where there’s a line of people (usually kids) and the person at one end whispers a message in the ear of the person beside them, and they whisper it to the next person and so on. The person at the opposite end of the line gets to announce out loud the message they have received. It’s seldom the same as it started out.

And so it is with many stories from the Bible. They start out one way—which is usually their written form—but end up as something very different. And I think the best example of this odd game of scripture telephone is the story at the beginning of the second chapter of Matthew’s gospel. It’s a story that really catches our fancy, but the story we tell ourselves isn’t necessarily the story that’s in the Bible.

For example, there’s nothing in the story that refers to the men who visited Jesus as kings.
They were seeking a King. And they visited another king. But they themselves were not kings. Matthew calls them μάγοι, or magi (if you read as much fantasy literature as I do, you’re probably more comfortable calling them mages), which might be translated as wise men. 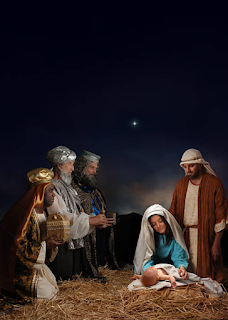 And then there’s the number of them. It’s almost impossible for us to comprehend this, so deeply ingrained is the number three in our picture of the story, but Matthew never tells us how many there were. It could’ve been two or it could’ve been a hundred. All we know is that the Bible tells us of three gifts they brought. Three people can bring three gifts. But so can two. Or ten. We have no idea.

Those are a couple of the things we get wrong about the story. There are also several things that confuse us. Like, what exactly was that star? We don’t think it was a comet—Halley’s Comet didn’t appear anywhere around the time that Jesus might’ve been born (which was probably actually a few years before the year 0 AD), and there’s no historical record of any other great comets in the night sky. But at some point around that time, the planets Jupiter and Saturn were in conjunction, and that’s the sort of thing mages from the east might’ve noticed. And since Jupiter is thought of as the royal planet, and Saturn was often associated with the Hebrew nation, it makes sense that this led these mages to seek One who was destined to be King of the Jews. [1]

And then there’s the time and place of their arrival. How old was Jesus at that point? He was still in Bethlehem and not Nazareth where his parents actually lived, so he must’ve been quite young. But there’s no mention of a stable or a manger.

These are just a few of the things that might give us pause about the story of the magi following the star. But what these problems don’t do is spoil the theological statement being made here. The first important part of that statement is that Jesus is a King, but not the kind of king Herod was. And we see later that he’s not the kind of king Caesar was, either. He’s a King of a different order—the King of kings, in fact. And by that, I mean all kings. The acknowledgement of his kingship by these strangers who didn’t belong to the Hebrew nation is the first hint we get that Jesus was born for everyone, both Jew and Gentile.

The gifts they give him are also symbolic of royalty, of priesthood, and of sacrifice. We all know that because we sing We Three Kings—a song whose title should now make us a bit uncomfortable.

And those are just some of the more obvious things. There’s a lot of subtlety as well, and one of things about the story I like best are the very last words of the passage as it was read earlier: They left for their own country by another road. [2]

Going back by a different way than the one we came is shorthand for something. It means something changed. Perhaps we’re in more of a hurry. Or perhaps we have more time on our hands. Or perhaps we learned something we didn’t know before. 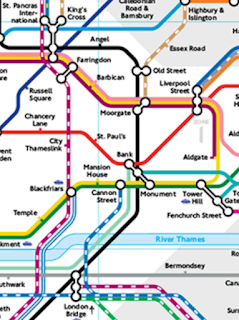 Think of it this way. Say you live in a huge city with a subway system, and that’s how you commute back and forth to work. You live in one neighborhood and your work in another clear on the other side of the city. You know the area you live in. It’s where you walk and shop and play and visit. And you know the area where you work—you also shop there, and you go to lunch and run errands. But the land in between? It’s just names of stations and dots on a transit map—you’ve almost never explored those neighborhoods. The map may be an excellent representation of how to get from one place to another underground, but it’s a very poor representation of how things actually look aboveground. Which can lead to some interesting exercises like this one described by Bill Bryson in his book about Britain, Notes from a Small Island:

Go with somebody who doesn’t know a certain part of London to Bank Station and tell them to take the Tube (aka the London Underground) to the Mansion House station, while you walk there. Using the standard underground map, which is very easy to read, they will take a Central Line train… change to a Circle Line train heading east and travel five more stops. This might take quite a while, depending on how long they have to wait for their connection at Liverpool Street. When they finally arrive at their destination and emerge from underground, what they’ll discover is that they’re in fact only 200 feet down the street from Bank Station, where they started their journey, and that by hoofing it, you’ve had enough time to eat breakfast and do some shopping while waiting for them. [3]

Once we get to know something or somebody, our perception of it—or them—changes. The way I get around Huntsville, for example, is very different now than it was last year when I first arrived. Back then, Huntsville was simply a series of destinations and right and left turns. I had no real picture of the overall reality. Now I feel a lot less hassled getting where I’m going because I know more than just what Google Maps tells me.

And so it is with people. Once we get to know someone, we understand them a lot better. We know a bit more about what makes them tip. Sometimes we are even privileged to know why they’re like they are (but not always). 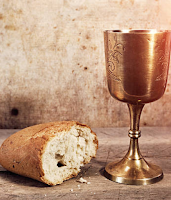 Being a Christian is a lot like getting to know a place and getting to know a Person. We have road maps such as the Bible and creeds and the order of worship. And of course the reason we have those things is so we can better understand who Jesus is. And nowhere does that journey come together more than it does when we make our way to the Lord’s Table and share in the Supper—and that journey is real, even if our movement is spiritual and not physical. That’s because it’s here at the table that our religion leaves the realm of words and ideas and enters the realm of flesh and blood. At the Table, we don’t just hear how wise or powerful God is, but we taste and see that God is good. However we make our way to the Table of the Lord, we leave by a different route—just like the three wise men. What we believe is no longer a book or bullet points on a chart. It is part of who we are. We aren’t just told to go here or to go there; the destination has become something within our very being, because God has met humanity in the place where we are.

So come to the Table. Know that Christ was born for you and lived for you, died for you and rose for you, and is even now offering his very self. But also know that when you come, no matter where you came from, you’ll leave by a different road, because neither you nor the world you live in will remain the same.
—©2018 Sam L. Greening, Jr.