Together in One Place

When the day of Pentecost had come, they were all together in one place.
—Acts 2:1

Waiting. It’s not something we’re usually all that good at, but it’s something the Bible makes a big deal of. How many times is waiting made into a virtue? One of our best-loved verses is found at the end of Isaiah 40: Those who wait for the Lord shall renew their strength, they shall mount up with wings like eagles, they shall run and not be weary, they shall walk and not faint. This is the same kind of waiting that’s found throughout the psalms. One of my favorite instances is Psalm 31:24, which says, Be strong, and let your heart take courage, all you who wait for the Lord.

Waiting and hoping are two very different words in Germanic languages, such as English. But in Romance languages, they’re the same word. Esperar, for example, in Spanish. And so those two concepts—waiting and hoping—are much more closely related in some minds than in others.
But speakers of English and German can also easily find hope in waiting if we think of looking forward. Looking forward to something is indeed waiting for it, but it’s doing so in great hope. And that expression is even more positive in German. Their expression for looking forward to translates literally as rejoicing at something.

So in the opening chapter of Acts, the followers of Jesus were told to wait in Jerusalem for the fulfillment of God’s promise. Not the kind of uncertain waiting that causes us confusion and emotional pain. But the kind of waiting that goes on when we look forward to something. They had no idea how the fulfillment of God’s promise would manifest itself. But they were glad at the thought of it, whatever it was. 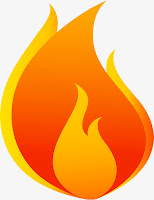 And so, at the opening of Acts 2, we find all them together in one place. Waiting. Hoping. Looking forward to. Rejoicing at what was coming. And when it came, it was phenomenal. It arrived on the sound of a windstorm. And it appeared in flames—flames that didn’t choose the greatest or most talented or most powerful, but hovered over all those who waited. When something like that happens, of course, a person can’t keep silent. And so the fulfillment of that waiting brought forth from the tongues of the waiters exclamations of joyful surprise. And yet the followers of Christ heard in each other’s voices a strange tongue.

Maybe it was strange to those speaking, but it was by no means pointless. For every tongue that was spoken was somebody’s real-life language. The noise was so great that a crowd began to gather. And those strange languages turned out to be a proclamation of God’s acts of faithful love and sovereign grace that every person, regardless of where they were from, could understand.

There’s a great deal to celebrate on the Day of Pentecost, and our attention is mostly drawn to the noise and the flames and the tongues. But today I want us to think about that glorious—and yet oft-overlooked—first verse, the one that so matter-of-factly says that when the day of Pentecost had come, they were all together in one place.

Christianity to us is a worldwide religion that spans thousands of years. It’s quite inconceivable that all of us could be in one place at the same time. Yet here they were. Every last human who believed in Christ crucified, resurrected, and ascended. A sign of their unity could be heard in their message, was that all, regardless of their native tongue, could understand them. But I think we often make a mistake here. We often think that the languages were fused, that all spoke and understood one heavenly tongue. And that if we want to be unified Christians, we need to give up who we were to become something else. After all, didn’t the Apostle Paul say that if anyone is in Christ, there is a new creation; [that] everything old has passed away… [and] become new? (2 Cor. 5:17)

I think we’re wrong to assume that the new creature loses her or his individuality, because here in the 2nd Chapter of Acts, God seems to affirm the individuality of every person there. It’s as though each person came from a different country. And to embrace the gospel, not a single person had to give up their language in order to fully understand this new thing that God was up to in their midst. The story of Pentecost could very easily have been the story of the disciples telling the wondrous deeds of God in Hebrew or Aramaic or Latin or Greek, and every person in Jerusalem that day miraculously understanding that single tongue. But the opposite is described. There was no tongue in which the gospel couldn’t be understood, and no Elamite had to understand Greek, no Persian had to understand Latin, no Arab had to understand Hebrew, no Roman had to understand Aramaic in order to hear the good news that the thing that Jesus’ followers had all been waiting for had arrived. 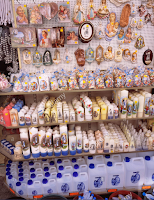 Like a lot of people—especially foreign language majors—I took a semester of my junior year of college off and spent it abroad. I started out by traveling around Europe before finally ending up working for a few months at a German winery. And my travel partner at the time was a devout Roman Catholic. So one of the places we went was the little French village of Lourdes in the Pyrenees—a place with a holy spring that had arisen on the spot where Saint Bernadette was said to have seen visions of the mother of Jesus.

We arrived by train, and I think I remember expecting to see a quaint village that exuded holiness. But instead we were immediately inundated with cheap souvenir stands which, as it turned out, pretty much covered the whole town. Nearly all of the souvenirs were religious in nature, the most popular being rosary beads and bottles. The bottles were of a very specific design however. They were plastic, in the shape of the virgin (Mary), and had little gold screw-on caps in the shape of a crown. Of course they were intended to be filled with the local holy spring water.

The image of those bottles has followed me all of my life, and not really in a good way. To me they stand for the idea that the Sacred can only find a home in a certain form. That if we want the Holy Spirit to make her home within us, we must first become like somebody else—somebody who’s better than we are.

But the fulfillment of God’s promise that God would make God’s home within and among us did not happen that way. It filled individuals who looked not to great preachers, not to saints, not even to the mother of their Lord, but to Jesus. And the good news as they told it was heard by individuals who remained themselves. The new creation that was brought about was no generic saint, but was a person as different from all others as he or she was before the Spirit came to call. 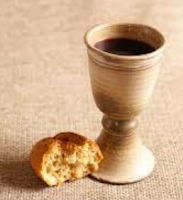 So let’s gather round the table this morning with a threefold hope.
So come, take, eat, be strengthened, and know that when you rise, you will do so in the power of the Holy Spirit.
—©2018 Sam L. Greening, Jr.