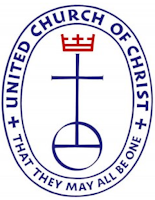 The United Church of Christ, as just about everybody knows, is a progressive church. One of the first places a stranger might notice this is in our hymnal. The New Century Hymnal changes lots of words. Sometimes traditional hymns have their theology changed a bit. Just about all the thees, thous, and thines have been changed to you and yours. Also, just about every reference to fathers, mankind, and brothers have been changed to more gender neutral language. And—and this is the most controversial—references to God have been changed pretty extensively. God is seldom called Father in our hymnal, and the word Lord is also uncommon. And most controversial of all, even Christ is seldom referred to as he in The New Century Hymnal.

And so when Father’s Day rolled around this year, I decided I’d do something different. I knew I wanted to preach about the images we use for God in our language, so I decided that it was an okay context for us to use some old images that we don’t hear as much of. And so all of our hymns this morning come from old UCC hymnals—I mean really old ones, like 1931 and 1941. The hymnals that were official when the UCC was formed in 1957.

At the time I did this, I didn’t really think that much about how poignant it might be for us to refer to God as a loving parent. And I say that because I’ve watched the news recently as children are being punished for crimes they never committed by being ripped from their parents arms and placed in internment camps—over 2000 of them so far. It sounds bad. It’s actually worse. Colleen Kraft, who’s “president of the American Academy of Pediatrics, visited a Texan shelter for migrant children and saw a young girl crying. Staff told her that federal regulations prevented them from touching or holding the child to soothe her.” 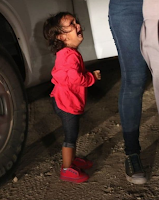 In another instance, a translator could no longer take it when he was called upon to translate something to a brother and sister—ages six and ten—who’d just been separated from their mom and were frightened beyond words that they’d be separated from each other. And what was he told to translate, but that they were not allowed to hug each other.

Our tax dollars at work.

I’ve heard it said that it’s difficult for some people to use father imagery for God because some fathers were not kind. This was not my experience, but I try to understand, and (except for the Lord’s Prayer) seldom use father imagery in my public prayers—at least not without also using mother imagery. But the point of calling God “Father” is not the fact that God is male, but the fact that God is a loving parent. And as a Christian and a pastor, as we gather in our churches and talk about Father’s Day, I cannot help but picture these frightened children being left with no parents, loving or otherwise, in a strange land.

Father is one of the most important images for God in the New Testament. It’s what Jesus called God, and it’s what he told us to call God when he taught us to pray. It’s one of the parts of the Name we call God when we baptize. But as important as this Name is, a name is not God. In my children’s message back on Trinity Sunday, I tried to help the kids understand a little bit about the Trinity. Let’s face it, none of us understand the Trinity very well. But the way I look at it is something that I hoped would help the kids. And that is that each of us at any moment in time might be something different to somebody else. The same person can be a teacher and a father and a husband and a son and a customer and a driver. Any one of those might be the only thing he’s known as to a particular person. And all of those things are 100% true about him. But none of those things all by itself explains who he is.

Another person might be a daughter and a mother and a sister and a friend and a doctor and a church member. Once again, some of the people she comes into contact with might know her as only one of these things. And each of them is 100% true. But none of them are 100% of who she is. Each of us is a different thing to different people. And if that’s true of us, how much more true is it of God. I might know God as Father or Mother or Almighty or Rock or Redeemer or Holy Spirit. I might see God in the skies or on the cross or in the face of my neighbor or in the wind that blows the grasses or in the emptiness of the tomb. I know that God is all of these things and more, even if I can only experience God as one thing at a time. What’s true for my relationship with God need not be true for yours, though I hope that all of us intersect at some points.

And so the metaphors we use for God become like any image—physical or mental: they’re 100% true of a particular place and time, but they’re not 100% of the truth. They’re snapshots. I might look at my driver’s license photo and know that that was who I was the day I got my license renewed. But that photo is not the only truth about me that exists. The same is true of a photo of me behind the pulpit, or the photos of me as a kid on Christmas morning or in my high school yearbook. Those are snapshots of me at different points in my life, just as metaphors for the Divine are snapshots of God for different people at different points in their spiritual life. Some are more common than others. Some are arguably more important than others. But none of them contains 100% of the truth, even if they’re 100% true.

Because our hymns today concentrated on the image of God as Father, I chose scripture readings that said something else. The Isaiah passage compares God to a Mother, and in the passage from John, we hear Jesus trying to destroy preconceived notions by referring to God as a Spirit whom all people, regardless of their religion or nationality, could relate to.

As humans it’s difficult to eliminate preconceived notions, however. And there’s one that I want to talk a bit about that at one time I would’ve been willing to remove from my vocabulary, mostly because it seemed to me to be a bit of a dead metaphor—a concept that had lost its meaning, at least in my culture. And this image is one of the most common, both in the Hebrew and in the Christian Bible.

One of the most common terms for God in the Old Testament is Adonai. This is one of the most important terms as well, because it’s the word that we use to replace God’s Name, which tradition tells us not to pronounce out loud. If you open your Bible to almost any part of the Old Testament, you’re likely to see the word Lord. And the word Lord is written in two different ways. If it’s written with a capital L and then a lower case o-r-d, then the Hebrew word it’s translating is Adonai. But if it’s written all in capital letters, then we know that the Hebrew word wasn’t the word for Lord, but the actual Name of God, represented by the letters YHWH, but not pronounced.

Adonai is actually a formal form of the word adon, which refers to a human ruler. And the Greek translation of this word is Kyrios, which we also translate as Lord. According to Greek grammar, when you call out to the lord, you change the ending. And so to say, “O Lord” in Greek, you say Kyrie, as in Kyrie eleison, or O Lord, have mercy. And calling either God or Jesus “Lord” is extremely common in the New Testament.

Like I said, I used to think this image had become a relic of history. In our culture, we have very little idea what a lord actually is. We’ve heard of the House of Lords over in Britain. And we sing about ten lords a-leaping at Christmas.

But then I discovered what that English word actually means. And if you use your imagination, you can still hear how the Old English word became the modern English word. The Old English word was hlāford, which eventually got shortened to Lord. And hlāford actually meant loaf-ward, or the keeper of the bread. English may be the only language with a word for Lord that actually meant something like this, but is it not beautiful to have that as a snapshot of God in our heads? God is the one who keeps our daily bread and gives it to us when we need it. Try to remember that the next time we celebrate the Lord’s Supper.

The fact that the UCC likes diversity is important to me. I love it that we don’t like using exclusive language when we refer to God. But even we need to be reminded sometimes that any language we use to refer to the Divine is just a snapshot: an image that represents something that may be 100% true, but is not 100% of the truth. I love hearing people call God Mother. I also love praying, Our Father, who art in heaven. I love it when we think of God as the Spirit of Gentleness. But late in life I’ve also come to appreciate that old word so treasured by the patriarchy, Lord. And I now think of this whenever I pray, Give us this day our daily bread. For God is my keeper—not just a bread-keeper, but a keeper of faith, the keeper of my life and the One who will keep my going out and my coming in from this time on and forevermore.
—©2018 Sam L. Greening, Jr.