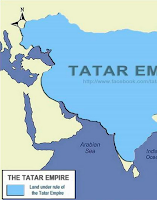 ✑ Nobody in Europe knew it at the time, but a plague was spreading across the steppes of Central Asia in the 1340’s. It was devastating the eastern flank of the Tatar Empire, even while the Tatars were trying to expand their empire in the west. In their westward movement they came upon a Genoese colony on the Crimean Peninsula called Kaffa in the spring of 1347. But as they lay siege to Kaffa, certain of their imminent takeover, something unexpected began to happen. The Tatars all began to die. It was a horrible death caused by some pestilence they didn’t understand. But they did see that it was contagious. And so before the last healthy men gave in to this unknown disease, they catapulted the bodies of the dead into the walled city of Kaffa. Whether or not there were survivors, we don’t know. Maybe the few remaining Tatars retreated, or maybe there were no remaining Tatars.

The Genoese inside the city celebrated their miraculous victory and thanked God for sparing them from the Tatars—thinking, no doubt, that the pestilence that wiped out their enemies was a divine gift.
As you might already have guessed, however, their celebrations didn’t last long, for soon the Genoese started dying of the same disease that had killed the Tatars. Yet the Genoese were nothing if not practical, and the colony of Kaffa was founded in order to expand an already expansive trading empire. And so as the plague killed off most of their fellow citizens, the few able-bodied traders left loaded one last ship full of precious spices and cloth, and set sail for European ports on the Mediterranean.

That same year—1347—that ship made its way to Sicily. Those who, for whatever reason, had not succumbed to the plague, stayed above-deck and traded with the locals, even while the holds below-deck were filled with the dead and dying. Then that ship visited other ports on the islands of Sicily and Sardinia before heading to the Italian mainland, and finally to France, before it sailed off into the sunset never to be heard from again. The disease it left behind devastated Europe, killing tens of millions of people (that is, somewhere between 25 and 50% of the entire population) before finally petering out in 1352, leaving the continent underpopulated and economically crippled for over a century. [1]

Of course, my sermon is not about the bubonic plague, this morning. It’s about Genesis 1:26, [W]hen God said, “Let us make humankind in our image, according to our likeness; and let them have dominion over the fish of the sea, and over the birds of the air, and over the cattle, and over all wild animals of the earth, and over every creeping thing that creeps upon the earth.”

The 14th century story of how the plague came into Europe may seem like an odd way to introduce a sermon on human stewardship of the earth, but for some reason it’s what I think of when I hear how important it is for us to put economic interests above environmental ones. A Colorado lawmaker put it best a few years ago when he said that “efforts to slow global warming are ‘an attack on the free-market system, an attack on capitalism, and an attack on countries that have progressed to the point where their economies are excelling far beyond other countries.” [2] The old political campaign message, “It’s the economy, stupid,” might well have been exactly what was on the minds of the merchants of that last ship out of Kaffa in 1347, and it’s definitely on the minds of many Americans as we face the probability of climactic disaster over 670 years later. But to whom the word “stupid” refers is, I suppose, yet to be seen.

Those who see no reason to change their lifestyle or their way of doing business in the face of what might be catastrophic climate change point to the fact that the jury’s still out on what’s actually causing this, or indeed if climate change is even happening. Certainly the same thing could’ve been said about our 14th century European counterparts who never could quite figure out what was causing the plague that was devastating their continent. Though we now know for sure that the disease was carried by fleas on rats, the good people of the mid 1300’s blamed everything from God’s wrath to the breath of those afflicted, with the most reputable scientists agreeing that the real cause lay with the Jews. So extreme was the reaction against the Jews that for once the Pope himself tried to intervene to stop the banishment and murder.

Our science is a bit more advanced. But all the science in the world doesn’t matter if we brush it aside or even vilify it. Here, I’d like to advocate for the marriage between religion and science, and say that when God gives us wisdom or ability or knowledge, it’s actually wrong not to use it. We certainly feel this way about medical treatment for ourselves. And we love science when it comes to better cars and faster internet and smarter phones. “What a gift,” we say. And I believe we’re right. Technology can make life better. But for some reason, when 9 out of 10 (or is it 99 out of 100?) scientists point to human activity as the cause for climate change, then we decide it’s inconvenient. Cleaner air is either too inconvenient or too expensive, and whatever the cost, we have decided ahead of time that we don’t want to pay it.

Naturally, those saying this are all atheists, aren’t they? Well, not exactly. Most of the people saying this are professing Christians who somehow twist their faith to fight against what they see as the sin of environmentalism.

So let’s go back to a verse I quoted earlier. It’s one of a series of verses about creation, but in a way it’s the most important one—because it’s the creation of me and you. And when God created human beings, God gave us dominion over the other creatures. That was verse 26. Then in verse 28, God tells us to fill the earth and subdue it. And these words have created a false impression among biblical literalists, who seem to think that they’ve been given carte blanche to do whatever they want to other animals and to the earth itself. But that’s clearly not what these words mean. Dominion. That’s a fancy word for rule. And what kind of ruler runs his or her nation into the ground, causing mass extinction, and torturing those people and animals that remain? Not a very good one. Dominion implies good stewardship. 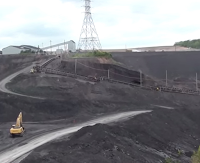 And picture what “subdue” must’ve meant to people who lived in a desert. Subduing the earth meant using their wisdom to put it in order, to make a lush garden out of sand, to grow crops where once there was rock. Nobody read those words and thought, “Wow, that means it’s okay for me to take a lush garden and turn it into a wasteland.” But somehow, modern Christians believe that that’s exactly what this means: We picture oil fields where there were once gardens, entire mountains that have had their tops removed, fracking beneath the earth causing earthquakes and depleting water supplies, drilling into the ocean floor and killing the fish we were given dominion over.

In the section from Genesis 1 that I read to you, I hope you noticed one of the most important theological ideas in it, and that is that we were created in the image of God. This can mean many things, but I think one of the things this refers to might be the way we’re able to look at things. As much as we love our dogs, they really don’t seem to care about the beauty of their surroundings. They don’t really appreciate our creative attempts at decorating the living room, and they don’t care about glorious landscapes. The same can be said for wasps and weasels. People do care about that kind of beauty. And so I think caring for the beauty of God’s creation is part and parcel of being created in God’s image. To destroy that beauty is evidence not of our dominion, but of the fact that the image of God has been obscured in us. Another important aspect of the image of God is found in the fact that only here, only in the creation of humankind, does Genesis 1 use a plural pronoun to refer to God. Nothing else needed it, because nothing else was created in God’s image. This is evidence of the Christian belief in the Trinity: God is One, but God is God in Three Persons. To be created in the image of such a God, we can’t make decisions for creation without consensus, for to be truly created in God’s image, we must be in community. Just as the Church is the body of Christ only in community, so I am not the image of God and you by yourself are not the image of God, but together, we reflect God’s image.

And so in the case of what’s going on in the world today, one nation cannot make decisions for all nations without consultation. That runs counter to the biblical ideas of both dominion and the image of God. We have been granted gifts of scientific knowledge and research. To ignore it just because it might cost us money cannot be defended. Yet, even if we don’t all agree on the science of climate change, I think most of us have to admit that the plague has reached our city gates. We can choose to flee from the facts in order to continue our lifestyle unabated. Or we can face the difficulties ahead, and do what we can to contain the damage.

Just as the Tatars had a secret weapon they tossed in among the Genoese in 1347, I as a preacher have my own zinger: the Name of Jesus. I hate to throw it at you in order to advance my own agenda, but the right to ask, What would Jesus do? is one of the perks we ministers get in our packages. And it’s not really a cheap shot in most cases. In fact, I can use Jesus to tie a neat little ribbon around my argument. For in him, Christians see a perfect example of the image of God. And though Jesus didn’t talk about environmentalism, he did tell us to love our neighbor as much as we love ourselves; he taught us to sacrifice on behalf of others; he taught us to forego wealth and take up our cross. 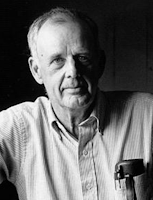 In church we learn to appreciate God’s creation as beautiful. And it is in church that we can begin our divinely appointed consultation with others on matters of stewardship: If Christ is our example of God’s image, how might we as his followers better love our neighbors—in Huntsville, in the U.S., and all over the world? To begin, as a church, we can begin to make small decisions that we know will have an impact. How do we use energy and how do we waste it here? How often do we use disposable items when we could go for reusable? How can we best live out God’s image among us? I’ll close today’s sermon with some words by my favorite poet, Wendell Berry, who has an awful lot to say on the subject at hand:


Be thankful and repay
Growth with good work and care.
Work done in gratitude,
Kindly, and well is prayer.
You did not make yourself,
Yet you must keep yourself
By use of other lives.
No gratitude atones
For bad use or too much. [3]
—©2018 Sam L. Greening, Jr.
NOTES