From Sour Grapes to Green Eggs and Ham


The parents have eaten sour grapes, and the children’s teeth are set on edge.
❦ Jer. 31:29 ❦
I do not like them, Sam-I-am, I do not like green eggs and ham.
❦ Dr. Seuss ❦ 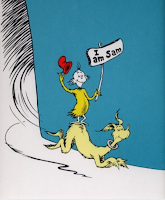 For example, I could, with no government interference, sell my house in southeast Huntsville and buy an historic home in Twickenham. I am free, if I want to, to preach this sermon in Albanian. And I am free at any moment to stop what I’m doing and solve a problem using calculus.

But I have to admit that my freedom to do all those things is somewhat tempered by the facts at hand. I can’t afford an historic home in Twickenham, I cannot speak a word of Albanian, and I don’t actually know what calculus even is.

All this goes to show that my freedom is limited by my talents and abilities. Just because I’m free to do a thing doesn’t mean I can do it. And when it comes to theology, a lot of people get these two concepts confused—especially when it comes to human beings and sin.

Freedom is defined as the absence of external coërcion; and in that sense, God indeed leaves us absolutely free to do good or evil. Free will is a real thing if we look at it that way. The question is, are we actually able to choose? Does the power of making perfect choices lie within us? [1]

John Calvin says that we know the difference between good and evil, but asks if we act on that knowledge to do good. The answer is that our appetites aren’t really controlled by our will—which may indeed be to do what is right—but rather by what is obviously our natural inclination; that is, it’s not a question of human virtue, but of the human condition. [2]

In the days of the Hebrew prophets, it was apparently a common complaint among the people to say that God was punishing them for the sins their ancestors committed: The parents have eaten sour grapes, and the children’s teeth are set on edge. But both Jeremiah and Ezekiel prophesy that reward and punishment will someday be based not on what people’s ancestors did or didn’t do, but on the choices they themselves make.
And this is basically the argument the Apostle Paul takes up in Romans 7. Assuming that the prophets and the apostle were correct, and we’re now suffering the consequences of our own choices, then let’s talk about those choices. In today’s New Testament passage, Paul decides not to talk about the human condition in broad terms, nor to talk at people and tell them what’s wrong with them. Instead, he suddenly gets very personal—perhaps more personal than he does anywhere else in his letters—and begins to talk about the moral dilemma he continually finds himself in. The people reading the letter could get insulted if Paul called them sinners or criticized their ancestors, but they can’t argue with Paul’s own personal experience.

He says, in basic English, “The law has taught me what’s right, and I want to do what’s right. But I continually find myself doing what’s not right. It’s as though it’s somewhere in my very nature to choose the wrong thing.”

A conservative Reformed theologian named R.C. Sproul referred to Paul’s arguments in Romans as “coiled springs.” The much more progressive (but still relatively traditional) biblical scholar N.T. Wright says something quite like that, namely that Paul talks in “spiraling loops.” [3] What they’re both saying is that Paul’s theology is propelled forward by first doubling back and building on previous points in order to reach the next level of an understanding of God’s grace. The doubling back is often painful, because it reminds us of how much we actually need God’s grace. But the grace itself is made all the more amazing by the beauty of forgiveness.

I’m talking about Romans 7 today—a chapter we skip in order to get to the marvelous description of God’s grace in Romans 8: 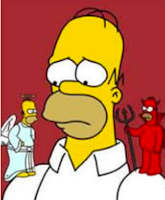 But in order to get there, we have to slog through the muck of Romans 7, in which Paul speaks of a very difficult inner struggle. It’s easy to picture him with a little angel with a harp sitting on his right shoulder, trying to convince him to make the right choice; and a little devil with a pitchfork on his left shoulder, trying to get him to do the wrong thing. And his conclusion seems to be this: The devil may lose a battle here and there, but he’s destined to win the war.

Believe it or not, a modern metaphor of the grace of God overcoming the kind of contrariness found at the heart of human nature had its roots in the community I came here from—La Jolla, California. That’s where Theodore Geisel (going by the name Dr. Seuss) wrote a famous book called Green Eggs and Ham—a story about a grumpy guy (a guy who‘s never named in the book) being offered a dish he’s never tried before by his friend Sam. The dish, of course, is green eggs and ham. [4]

You might argue that this book isn’t about the struggle between good and evil. And I guess you’d be right. After all, green eggs and ham are, apparently, pure unadulterated goodness, and quite delicious! And Sam’s grumpy friend offers no bad alternative to this good food he so steadfastly refuses. All he knows is that he’s not interested in this deliciousness:

And as we progress through the book, his resistance to it spirals out of control until finally, standing knee-deep in water with a sinking ship in the backdrop, he tries the green eggs and ham. And what do you know? He discovers that he likes it!

In his reflections that I alluded to a few minutes ago, N.T. Wright asks an interesting question—one that is eerily germane to the world today: Paul wrote in Romans 7 that, though he loved God’s law, he observed in his body another law which resulted in death. So is it at least worth asking whether zeal for God’s law was not only bringing death to non-Jews, but was also bringing down death upon God’s own people. The historical situation was that religious zeal was driving the Jews closer and closer to the brink of a war with Rome that they could not possibly win—indeed there was a Jewish rebellion shortly after Paul wrote those words, and it resulted in the destruction of the temple and the deportation of most Jews from their homeland.

If this is in any way a valid reflection, it cannot help but invite comparisons to many of the ethnic and political struggles going on today—not only in the Middle East, but seemingly everywhere on earth—“where zeal for ancestral traditions, which may or may not have been good in their day and place, leads to idolatrous behavior that is as destructive for the perpetrators as for the victims. If Romans 7 could help the church to speak more clearly on such issues,” writes Bishop Wright, “we should be grateful.” [6]

The inner struggle comes out in the open in public conflicts. Democrat against Republican, liberal against conservative, Jew against Arab, Sunni against Shia, Protestant against Catholic, black against white, gay against straight, rebel against government, Louisville against Kentucky, Catalan against Castilian—the story is repeated over and over again on every continent: We will stick to our traditions because, even if those traditions bring us down in the end, at least those others will sink with us, because we’re all in the same boat.

To paraphrase Paul at the end of Romans 7, “Wretched person that I am, who can deliver me from this mortal conflict?” Paul’s answer isn’t just a statement, but an exclamation: “Thanks be to God through Jesus Christ our Lord!”

In a world where our teeth are continually set on edge by the sour grapes our parents once ate, God in Christ offers us a new delicacy, as foreign to our palates as green eggs and ham were to Sam’s friend. Paul reminds us that we’ve all fallen short of God’s glory, and that—individually and corporately—we all lose the inner struggle between right and wrong. The obstacle is simply too great to surmount.

And yet, in Christ, a crack appears in the wall—no, a gateway. On the other side lies God’s love, a love that offers forgiveness for all our past failures, and despite bad choices offers new possibilities. All we have to do is go through the gate. Now, if it were only big enough for one, I think we might actually walk through it. But it’s clear that it was designed for two, side-by-side, hand-in-hand. We’re taught in our culture that salvation is strictly a personal choice. But that’s not really the way the Bible describes it. Jesus talks to a people. Paul writes to entire communities. The pronoun you that we read throughout most of the New Testament is easily misunderstood in English. In Greek, it’s not you singular. It’s you plural. And so we’re invited to find wholeness together with others, in a community that invites outsiders in. When we get to the gate and look across the way and see that we might have to enter into the realm of God’s love with one of those others, one of those we shudder to think about, we pull up short. “But I’m not like that,” we want to protest. “I’m not Republican,” or “I’m not Catholic,” or “I’m not a Wildcat fan,” or “I’m not _______” (you fill in the blank). And yet,

Sent by my Lord, on you I call;
the invitation is to all.
Come, all the world; come, sinner, thou:
All things in Christ are ready now. [7]

God has asked us to a strange feast of foreign food. Though we know we’ve not been happy with what we’ve been able to forage on our own, we’re not so sure we want to try something new. And though we don’t mind the idea of a table being prepared for us in the presence of our enemies, what if our enemies sit down and eat with us?

These are our concerns, not God’s. We cannot call ourselves followers of Christ and not love God. And we cannot love God and not love God’s people. And so when the psalmist invites us, as she or he did last week, to “taste and see that the Lord is good,” let us remember Sam-I-Am, and—even in the midst of destruction—how much better were his green eggs and ham than our own sour grapes.
—©2018 Sam L. Greening, Jr.
NOTES