One day a rope walked into a bar and ordered a beer. The bartender took one look at him and said, “We don’t serve ropes in this bar.”

And so the rope got up, went outside, messed his hair up, and tied himself up. He then went back into the bar, sat down, and ordered a beer. The bartender stared at him impatiently, and said, “Hey aren’t you the rope who was just in here a minute ago?”

“No,” he replied, “I’m a frayed knot.”
❧
This joke was by no means pointless, but is actually a pretty decent way to remember the meaning of this morning’s lesson from the New Testament. The point at which I ended the reading is really just the beginning of what one scholar calls “the most impassioned defense anywhere in scripture of the sufficiency of the Spirit to guide the community of faith.” [1]

The letter to the Galatians was written to a church filled with new ChristIans who were tied up in knots, and who were fraying at the edges. You see, they’d been led by certain “missionaries” to believe that in order to be Christians, they had to take the laws of the Hebrew Bible literally. Though this should sound a bit over-zealous to us, we have to admit that we know of Christians in our own day and age who might say the same thing—indeed sometimes when we find the modern world a bit difficult to handle, we ourselves are tempted to be scriptural literalists… at least on some matters.

Today, as in the first century of our Lord, the message that the Law of Moses is needed to keep Christians from degenerating into self-indulgence and sin is not only attractive, but also seen by some as necessary. Humans need order, rules, and structure, and the missionaries helped the Galatian Christians meet this need, just as many sects help today’s Christians avoid the many gray areas of life by helping them see the world in terms of black and white, absolute right and complete wrong. Though it’s stretching the definition a bit, most of us would understand such a world view as that of a Christian fundamentalist. And if you like attending a United Church of Christ congregation, it’s doubtful you care too much for fundamentalism.

The way I see it, the problem with fundamentalists of any religion is not that their beliefs are conservative. As far as actual theology goes, I’m probably the most conservative person here. So I can easily handle religious orthodoxy, be it Christian or Jewish or Muslim. What I cannot handle, however, is the rejection of thinking, of questioning, of exploring, or of criticizing (especially when it involves self-criticism). Fundamentalists often describe themselves as persons of faith, but I would question the depth of their faith if that faith can’t stand up to a few questions—either from inside or outside their own religion.

Personally, I feel much more comfortable around open-minded persons of other faiths than I do around closed-minded Christians. I sometimes wonder if a person who can so quickly condemn another while justifying themselves truly professes the same religion I do. I wonder if a Christianity that places nuclear family above all else, and which sees the American flag as some sort of religious symbol, can truly be following the same Jesus I read about in my New Testament.

Like I said, I often feel I have much more in common with an open-minded Muslim or a Reform Jew, than I do with a Christian who is unwilling to allow for the possibility of evolution or who cannot reinterpret their own worldview according to what we know about psychology or geology or the human genome.

What seems to motivate fundamentalists is fear. They’re afraid to ask questions because they’re afraid of what the answers might be. Well, I can’t speak for Jews or Muslims, but I can honestly say that the questions are the whole point of Christianity. If there were no questions, there could be no faith—only knowledge. And the New Testament never tells us that knowledge about God saves us. The New Testament tells us that faith in God saves us.

And so when Christians are afraid of the questions, because questions might lead to some sort of chaos, I would counter that Christianity is about the questions. If obeying the rules is all that keeps us from degenerating into chaos, then our worship has no more spirit than a meeting of the Kiwanis Club, and our mission cannot be differentiated from the mission of the Rotary Club. It is the constant dependence upon the Holy Spirit that identifies us as a particular community—a community called the church, which, in Greek is ekklesia, or those who have been called out from among the rest of the world. 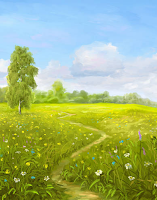 In the church, we believe that it is faith that saves us. And the psalmist talks about salvation in terms of God delivering us into a broad space. [2] And the term broad space in the Hebrew Bible [3] is completely consistent with notion of freedom that we read in the New Testament epistles. In both of these concepts there is a great deal of tension. Broad spaces are very liberating. But they’re also very difficult to defend. To be in a wide-open space is to be both free and vulnerable. Others have easy access to them… and sometimes those others are different from me. So this freedom to move about is not good news if I don’t trust my neighbor, because now it’s not just my freedom, but their freedom! Though I don’t like being confined, I have to admit that confined spaces are safe spaces. Remember how the Israelites complained after the Exodus that slavery had been more comfortable than freedom, so Christians are often challenged by the broad place into which God has delivered us.

I could be wrong, but I think this is precisely the kind of freedom Paul’s talking about in Galatians 5. It’s a broad freedom in which the church is guided not by a rulebook, but by the Spirit of God. And I say the church, because Paul’s not talking to individuals here, but to the congregation as a body.

For freedom Christ has set us free. Stand firm, therefore, and do not submit again to the yoke of slavery.
—Gal. 5:13

Don’t misunderstand Paul here. He’s not saying that freedom is an end unto itself. He’s telling the Galatians that Christ has set them free from slavery not just to sin, but to the law as well. He set them free to experience the freedom of the Holy Spirit. And this is a beautiful freedom in which the members of the church are set in a broad place—a place where they each can move about, interact with God and other Christians, grazing from one end of the pasture to the other in the knowledge that they haven’t left the broad place, they’re still part of God’s flock, they’re still in the pasture, and the Good Shepherd’s still watches over them.

Here it’s important to remember that the flock and the pasture are two different things. The flock is the people of God, and the pasture is the broad space God provides for them. They might feel safer in a tiny paddock, but they’re healthier out in the open field. They might feel they can’t be attacked in a narrow, enclosed space, but growth and vitality lies beyond the walls. And so we might think of the gathered community as the flock, and our meeting house as the pasture. Here we feel safe, but God never intended for us to remain within this space.

But another way of looking at it is to think of our bodies and our minds. I as a physical being might be part of God’s flock. But spiritually speaking, my mind is my pasture. My opinions, my belief system, my worldview—these are all the space I inhabit spiritually. My opinions don’t save me. My worldview isn’t what made me part of God’s flock. And this is easy to forget, because there are so many people who insist that having the right beliefs are why we’re part of the flock. But that’s not true at all. It’s not biblical at all. We’re part of God’s flock, because God loves us. We go astray and God brings us home. 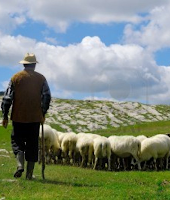 God brought me into the flock through the Good Shepherd, and yet as part of the flock, I still exist as an individual with my own knowledge, thoughts, and opinions. Sometimes I’m able to grow through what I myself know or believe. But more often than not, my spiritual health and my growth come about because I’ve been fed by somebody else. In hearing what someone else believes, my own beliefs are challenged. In finding out what someone else knows, my own mind expands. Even in others’ opinions I receive suggestions about what’s possible and even criticism of what’s wrong. Without any of this—if I existed only within the narrow confines of the little paddock of my mind—I would never change. So what could be a more beautiful way to think about our freedom in Christ than to know that, no matter what my sister or brother’s opinion is, I am still part of the same fold. Their faith—which sometimes differs from my own—can help make me a healthy Christian. And in this broad space where God has placed us to explore together, it takes faith to believe that God keeps us safe, despite the differences that might challenge us.

I know there’s a temptation out there to let ourselves get tied up in a frayed knot, unwilling to open ourselves to all those things that can challenge us. But my interpretation of the gospel is that this is not God’s will for us in Christ. Biblical literalism may lead to a lot of knowledge about certain facts, but the fruit of the Spirit is faith and life. Liberty is not something we arrived at because we willed ourselves to be free. And our freedom is meaningless if we use it to make more rules or simply enforce old ones. This week’s Groundhog ended with a quotation that reminded us that nothing is plainer than this: We should use our freedom in Christ to help our neighbor. And if what we want to do does no good to anybody, we should just forget it. [4]
—©2018 Sam L. Greening, Jr.