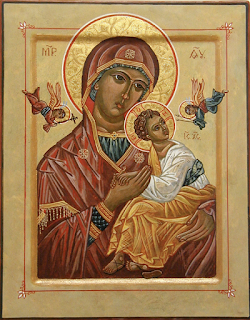 Turn to me and be gracious to me; give your strength to your Servant; save the Son of your handmaid.
✙ Ps 86:16 ✙
I'm a pretty committed Protestant, and so even a hint of the adoration of Mary is something I tend to avoid. But Christians have traditionally interpreted this section of Psalm 86 as a messianic prayer for deliverance from death, and that God's answer to the prayer was resurrection. I don't expect non-Christians to buy into this interpretation, but it is where I personally can enter into the psalm. If the Servant praying this prayer is the Anointed of God, then the handmaid spoken of as his mother must of necessity be Mary.

I'm going to try my hand here at paraphrasing Augustine's discussion of what this means:

"The Lord is the Son of the handmaid. Of what handmaid? The one who, when it was announced that the Lord was to be born of her, answered 'Behold the handmaid of the Lord: be it unto me according to thy word' [Luke 1:38]. Thus God saved the Son of his handmaid. The One who was his own Son was incarnate in both the form of God and the form of a servant. The Lord, therefore, was born in the form of a servant to the handmaid of God, and it was this One who prayed, 'Save the Son of your handmaid.' And he was saved from death—his flesh, which was dead, rose again. Thus each and every Christian who is a member of the body of Christ may also say, 'Save the child of your handmaid.'"

As Mary, God's handmaid, is the mother of Jesus, so the church stands as the mother of the members of Christ's body. Regardless of the circumstances of our biological birth, says Augustine, every believer has one spiritual mother: the church.

Thank you for your church and my place in it. May you acknowledge me as its member, even as I acknowledge to you my servanthood. May your daughter Mary's prayer be my own: Here am I, your servant, Lord; let it be with me according to your word. I pray this in the Name of her Son and yours, who taught me to pray...