'The Art of Divine Contentment'

There is great gain in godliness combined with contentment.

—1 Timothy 6:6
In the church I had belonged to up until about fifteen years ago, congregations couldn’t choose their pastors, and pastors couldn’t choose their churches. A bishop appointed pastors to congregations—usually with no contact between the two until after the appointment had been made. Ordained pastors in that church are called itinerant, and they are never even allowed to belong to a local church. In fact, if a pastor gets in trouble and loses his or her standing, the technical term is located. To be located means to be kicked out of the active ministry.

This is okay in a way, because churches never have to go through an interim period, and pastors never have to look for a job. There has been a bit of a change, not in the system, but in people’s attitudes toward it, in recent years. This means that I think there is a bit more consultation with pastors and churches before appointments are made, and pastors are allowed to stay longer in one place.

Back when I was part of that system, I was a young pastor and got moved around several times. Since I knew the move was going to come, I was probably more interested in my colleagues and my superiors than I should’ve been. Who got a big promotion? Who got a lateral move? Who was demoted? And this also probably meant a bit of detachment from the congregation I was serving.

Detachment is common when a move is imminent. I’ve seen it several times when people are preparing for long separations. It’s a way to protect yourself from being hurt. And people who have experienced lots of separation are often more detached than others from the people around them.

And so sometimes the choice is between anxiety or detachment. And detachment, in my mind at least, can easily lead to discontent.

And so back when I was dealing with this issue a bit more urgently (if the detached can ever feel urgency), I happened upon an old book. Well, the book was new, but it had been written a long time ago—like back in the 1600’s. It was by a Puritan minister named Thomas Watson, and it was called The Art of Divine Contentment. [1] Some of the contents may seem odd to a 21st century reader, but most of it really hit home—or at least it hit me where I needed to be hit. I was, as they used to say in the old days, convicted. I don’t know if you remember that word from the days when we used to have church revivals, but to be convicted was to realize that you were a sinner. And if you realized this, of course the next step was repentance leading to faith. And in my case, the sin I was convicted of was discontent. I couldn’t blame the entire thing at the feet of the church I was part of, but I was certainly allowing the one to feed the other. In The Art of Divine Contentment, Watson discusses the troubles that surround faithful people. And problems, he says, aren’t the real problem—it’s the way we respond to them that’s problematic. “It is not trouble that troubles, but discontent,” he says; “it is not the water without the ship, but the water that gets within the leak which sinks it.” [2] In other words, if we look for something to complain about, we’ll quickly find that we’re surrounded by problems. And discontent, according to Watson, is a gateway sin. By itself it seems relatively harmless, but it often leads to other more harmful sins such as jealousy. Why complain that you’re nothing but a beggar, Watson asks, when you’re being fed out of the alms-basket of God’s providence? “Others have the fat of the earth, you have the dew of heaven.”

The theme of contentment is also what was discussed in the New Testament passage I read earlier. “Contentment finds value in life rather than possessions, and… looks for sufficiency rather than” a surplus of things. Money, the writer of 1 Timothy says, isn’t the problem—it’s the desire for it, the pointless accumulation of it. Wealth, in and of itself, isn’t a goal to pursue; it’s a tool to be used. “The love of money is the root of all evil” [v. 10], we’re told, and there is many a faithful Christian thinker who might agree with this. We came into the world with nothing, and we’ll leave with nothing [v. 7]—and this actually places humans beneath certain animals, as Watson reminds us: 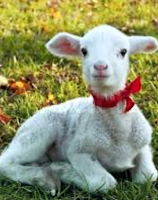 …other creatures bring something with them into the world; the lamb brings wool, the silkworm, silk, &c.; but we brought nothing with us. What if our condition at present be low? It is better than it was once… That which we have, [we have by] God’s providence; and if we lose all, yet we have as much as we brought with us.

The Greek word the writer uses for contentment is actually used only once in the Bible, though the idea is a topic used in many other places. In a worldly sense, contentment might be thought of as having an excess of things. But in the Judeo-Christian tradition, contentment is not brought about by financial security or physical health, but rather is “the result of an attitude of faith and trust in God with which one confronts any or all circumstances.” The one who is content has enough.

This is a pleasant enough teaching. But it’s not an easy one—at least not for me. It’s all too natural for me to worry, to murmur, or to find fault. “It is an easy thing to be wicked,” my 17th century colleague reminds me; “hell will be taken without storm, but religion must be learned… The trade of sin needs not to be learned, but the art of divine contentment is not achieved without holy industry.”

I’m pretty sure this is what Jesus was talking about when he told us not to worry about food or clothing, because life is more than food, and our bodies more than clothing. Instead look at the birds of the air and the lilies of the field. God provides for the birds—and aren’t you worth as much to God as several of those? And if God makes the lilies so beautiful, won’t God also provide for you? As the psalmist put it, “My heart isn’t haughty and my eyes aren’t raised too high above myself. I don’t dwell on things that are beyond my reach, and don’t wish for things I can’t have, but my soul has been quieted and calmed like a toddler in its mother’s arms [Ps. 131]. Once again: the one who is content has enough.

One of the images Watson used to explain contentment comes from contrasting two stories in the Bible. First is the story of Israel in the wilderness coming to a place they named “Marah” (from the Hebrew word for “bitter”), because they couldn’t drink the water there. The second is the story of the wedding at Cana, where Jesus turned water into wine. “Contentment sweetens every condition,” he said. “Christ turned the water into wine; so contentment turns the water of Marah into spiritual wine.” Contentment decides not to dwell on the negative, but to seek the positive. “Be not anxious to bring your condition to your mind, but bring your mind to your condition,” for by worrying, “we’re more likely to add a mile to our grief than an inch to our comfort!”

Here in the foothills of Appalachia, one thing I think most of us look forward to is the time of year when the oppressive heat of summer gives way to the more reasonable weather of autumn. And even though the leaves are dying and the trees about to go dormant, it looks to all the world as though they’re throwing a party to celebrate life. There’s something to be learned from nature, for in worrying about death, we often forget to celebrate the true goodness of life. The things that we accumulate are by their very nature temporary. “There is an autumn upon every [such worldly] comfort, a fall of the leaf. Now it is extreme folly to be discontented at the loss of those things which are [of] their own nature losable.”

Not all discontent is bad, of course. Take, for example, when I become discontented with my discontent and how that discontent might fill me with grief or even anger. Give me more discontent with that kind of discontent! Sometimes I simply find that wanting more is tedious and unfulfilling. I want to be discontented with my own selfishness, and I want to change. Or discontent with addiction or an abusive relationship—that kind of discontent is necessary in order to move on. Or in a spiritual sense, discontent with my paltry relationship with God or my pitiful knowledge of God’s word—these disquiet my soul. They’re the sign of a need for more trust, more faith, and more gratitude in my life. Instead of complaining about things that in the end don’t really matter, I should complain that I want a better heart. The problem is that my heart is often too high-minded, and to reach the goal of “divine contentment,” I shouldn’t strive for worldly comforts, but I should instead strive to bring my heart down to earth. 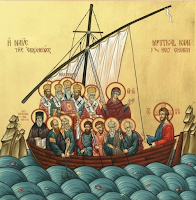 To strive for contentment is not to avoid problems. It is simply not allowing the problems we encounter to define who we are. God makes us who we are, and it is to God we look for self-definition. “Christ is in the ship of his church—fear not sinking, [for] the church’s anchor is cast in heaven.”

If friends leave me, if riches take wings, yet I have that within which comforts me, namely, a heavenly treasure. I bear all my treasure with me; when the blossoms of my estate are blown off, still there is the sap of contentment in the root of my heart. I have still an interest in God, and that interest cannot be broken off.

All sermons are, to some extent at least, a sermon that the preacher needs to preach to him- or herself. Forgive me today if, more than usual, I speak to you the words that I need to hear. But I do it with the humble hope (after all, misery loves company) that I’m not the only one here this morning who needs to consider the art of divine contentment. It’s not easily achieved—indeed, Watson wrote, it’s “the hardest duty in religion.” But with the Holy Spirit as our guide and with Christ as our strength, may you and I pray for ourselves and each other that the “great gain” found “in godliness combined with contentment” may be one of our greatest treasures.
—©2018 Sam L. Greening, Jr.