I remember talking to a church member who once told me in early October that they'd just gotten back from a business trip. When I asked where, he told me Germany. My eyes must’ve lit up. “Where in Germany?” I asked. “Munich,” he replied. And then I’m sure my bright eyes quickly turned to an evil grin, because if there’s a time to visit Munich, then it’s got to be the end of September, which is Oktoberfest. I think many Americans picture Oktoberfest to be kind of like a fall festival. But it really only means one thing, and that’s beer.

You’d think Oktoberfest would happen in October, but most of it happens in September. It always ends in October, though, and since 1994, the ending date is determined by Germany’s national holiday, called the Day of German Unity. This commemorates the day in 1990 that we stopped talking about the countries East Germany and West Germany, and started calling the whole country Germany. 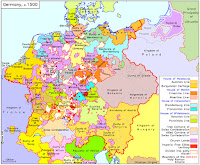 The idea of German unity is something many of us take for granted. We assume that only during the Cold War was Germany divided. But this is not true. A United Germany only came about in the 1800’s, and it’s an idea that many struggled for for decades. If you were to look at a very old map, you wouldn’t see any such country as Germany, but just a patchwork of small states, most of them with names that are only vaguely familiar to modern Americans. If we looked at a map of Germany around the time of Martin Luther, for instance, the eyes of people from Charlotte, North Carolina would be drawn to Mecklenburg; while those of dog lovers would look next door to Pomerania. Cattle farmers would notice Holstein, while just about everybody would recognize names like Bavaria and Saxony. One name we wouldn’t find would be Prussia. It existed by then, but it was east of the lands that we think of as Germany.

By the 19th century, however, Prussia had grown in importance until it included much what are now the Baltic States, Poland, and eastern Germany, as well as a good portion of western Germany. It had become the most important of all the German states, and the King of Prussia was the most important of all German rulers. Prussia was generally thought of as a Protestant country, and most people who lived within its bounds were Lutherans. But there were also Calvinists, and these included the king himself. Because Prussian rulers belonged to the Reformed Church, they welcomed Calvinist refugees into their lands. As evidence of this let me share with you a bit of scripture that you’re probably not familiar with. I’ll preface it by telling you that there’s an inner city neighborhood in Berlin called Moabit:

Give counsel, grant justice; make your shade like night at the height of noon; hide the outcasts, do not betray the fugitive; let the outcasts of Moab settle among you; be a refuge to them from the destroyer.
—Isa. 16:3-4a
So knowing this verse and a bit of Prussian history, you might guess—correctly, in this case—that Moabit was originally settled by Huguenots—that is Calvinist refugees who came from France during the reign of King Frederick William I in the early 1700’s. Over a century later, the Ruler of Prussia was named Frederick William III, and he, like his great uncle, belonged to the Reformed Church. His wife, Queen Louise, was Lutheran. By all accounts, Frederick William truly loved Queen Louise, and when she died young, it was nearly 15 years before he remarried, and his second wife was never named queen.

Something happened between Queen Louise’s death and the king’s remarriage that is important. And one of the reasons for it happening, Frederick William claimed, was the fact that he and his beloved wife could not take communion together. In 1817, he brought the administration of the two denominations together in one united state church. This happened throughout Prussian lands from the eastern borders to the Rhine River. And though some Lutherans were very unhappy with this state of affairs, the Calvinists did not object for the most part. 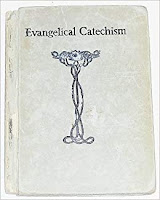 After this, when Germans emigrated to the United States from Prussian territory (which, remember, was vast) many of them did not differentiate between the Lutheran and Reformed denominations, but simply worshiped together in one Evangelical church (the German word for Protestant being evangelisch). Most of these 19th American churches were served by either Lutheran or Reformed pastors—whoever was handy and could conduct worship in the German language. This state of affairs was formalized in 1840 when a new denomination was formed, called the Evangelical Synod of the West—west meaning everything west of the Allegheny Mountains. In order to reflect the fact that it had grown to other parts of the country and even into Canada, the name was later changed to the Evangelical Synod of North America.

Some of you who are more experienced members of our denomination are aware of the fact that the Evangelical Synod was quite common in the Midwest, and some of you came from churches that worshiped in German up until World War I. And the World Wars proved fateful for this denomination both here and in its European homeland. 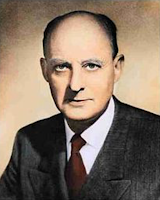 In the United States, a young pastor who, though born in this country spoke German as his mother tongue, began to become quite influential in the Evangelical Synod. His name was Reinhold Niebuhr, and he became involved in pressuring the German-speaking community to support the U.S. in the war against Germany, which had was all but inevitable. Though his efforts proved successful, he became disillusioned with the war as a result of the peace treaty which treated the Germans so unjustly. He continued his studies, became a professor at Union Theological Seminary in New York City, and turned out to be perhaps the most respected American theologian of the 20th century. His writings on church and politics were read by nearly everyone during his lifetime and are still respected by many. To give you an idea of Niebuhr’s importance, let me share with you this brief exchange documented by David Brooks in an interview he conducted with a certain senator from Illinois: “Sometimes you take a shot,” Brooks wrote.

Yesterday evening I was interviewing Barack Obama and we were talking about effective foreign aid programs in Africa. His voice was measured and fatigued, and he was taking those little pauses candidates take when they’re afraid of saying something that might hurt them later on.

Out of the blue I asked, “Have you ever read Reinhold Niebuhr?”

Obama’s tone changed. “I love him. He’s one of my favorite philosophers.”

So I asked, What do you take away from him?

“I take away,” Obama answered in a rush of words, “the compelling idea that there’s serious evil in the world, and hardship and pain. And we should be humble and modest in our belief we can eliminate those things. But we shouldn’t use that as an excuse for cynicism and inaction. I take away... the sense we have to make these efforts knowing they are hard, and not swinging from naïve idealism to bitter realism.”

As Obama’s words indicate, Reinhold Niebuhr was a realist when it came to public theology. His younger brother Richard was more of a pacifist, and he was a professor at Yale Divinity School. Reinhold and Richard were well known for the correspondence they carried out in public in the 1930’s in the pages of The Christian Century over just vs. unjust war. Enough cannot be said about the influence of this fraternal dialogue, and how it modeled to a nation how Christians with differing viewpoints might debate important issues.

Meanwhile, across the ocean, a pastor in the Evangelical Synod’s mother church was living a reality that was only being debated here. Because the Evangelical Church of the (Old Prussian) Union was a state church, it was controlled to an undue degree by politics. And as the Nazis came to power, the leadership of that church quickly capitulated to a national leadership which, in their eyes, was making Germany great again. Members of the official church referred to themselves as German Christians, and those who spoke out against placing political interests above theological ones called themselves the Confessing Church. One leader in the Confessing Church was Dietrich Bonhoeffer. You’ll usually hear him referred to as a Lutheran theologian. But he was a member of the United Church, and would therefore be a member of the United Church of Christ if he were here. Indeed, during his months in the United States, he was sponsored by the Evangelical Synod, which is today part of the UCC.

Because of his opposition to the Nazis, Bonhoeffer was executed in April 1945. But his theology lives on, as does his example. 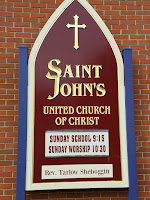 In 1934 the Evangelical Synod joined together with the Reformed Church to form the Evangelical & Reformed Church. This denomination didn’t last long, however, because in 1957, the E&R Church joined with the Congregational Christian Churches to form the United Church of Christ. Because we are confused by their name—which means one thing to most Americans, but something very different to our German ancestors—most people have forgotten what the old Evangelical Synod stood for. So remember this: They stood for unity. They were against theological divides when they arrived in this country, and they remained against them throughout their history. I’ve mentioned this before, but it bears repeating: Of all the different congregations that entered the United Church of Christ at its formation, many kept their original names. I last served the Congregational Church of La Jolla, a California congregation of the United Church of Christ. Especially in New England, but wherever the Congregationalists were found—including here in Alabama—churches that were once Congregational generally kept the word Congregational in their church name after they became part of the new denomination. Though not quite as common among Reformed congregations, it’s still quite true that they also kept the word Reformed somewhere in their name. If a church was once Christian, they, too, have often kept that word in their name. There are now some UCC’s with the word Evangelical in their name. But they are few and far between, and often they kept that word to keep from being confused with another church with a similar name. The old Evangelicals were always that much more interested in unity than division.

But even more than unity, the Evangelical Synod is remembered for serenity. That’s because—though others have claimed it—it has been documented that the original author of the Serenity Prayer was none other than Reinhold Niebuhr. Thus, whenever that prayer is repeated, regardless of its setting, we are praying words that were molded in the spirituality of a church that stood for something important: God grant us the serenity to accept the things we cannot change, courage to change the things we can, and wisdom to know the difference.
—©2018 Sam L. Greening, Jr.