Worship Wars: How One Church Bridged the Gap

When I shared with you about our European roots, one of the things I talked about was how the teachings of John Calvin spread throughout Europe, and from there to America. One of the places where Calvinism came to be espoused was Germany. While most of Protestant Germany remained Lutheran, there were certain portions—some sizable, others quite small—that adopted the Reformed faith. And sometimes in the midst of Lutheran strongholds there were Reformed (or Calvinist) minorities. One guy who ministered in such places in the 1600’s was a pastor named Joachim Neander. He’s famous for two things.
One is his hymns. We sang one of his hymns earlier in this service, and we sang his most famous one a couple of weeks ago—called Praise to the Lord, the Almighty. And the other thing has nothing to do with anything he did, except that one of his favorite places to go to commune with nature—and kind of like Jesus, people would follow him there and he would hold worship in the outdoors—was the valley of the Düssel River (the river that gives Düsseldorf its name). Long after he died, they renamed the area where he preached the Neander Valley, which in German is Neanderthal. It was in this valley, too, that the bones of a subspecies of pre-modern humans was discovered, and so we call those people Neanderthals. Remember that the next time we sing Praise to the Lord, the Almighty. 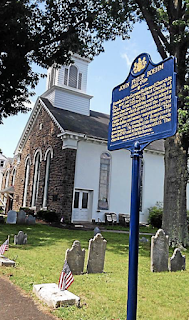 Like the Dutch and the Scots and the Puritans and the Pilgrims, German Calvinists eventually looked across the Atlantic as a place where they might live. And so they began to emigrate at the beginning of the 18th century. And in 1720, a young man named John Philip Boehm came to North America to work among German speakers. He came to the Philadelphia area, and his original calling was that of a teacher. But because there were no German Reformed pastors in the colonies, he was frequently called upon to read sermons to families and small groups. By 1725, as word spread of his work, he was asked to serve as a pastor. Because being a pastor would involve serving communion, he was reluctant to accept the call, but he eventually did. Though many affirmed his work, there were those who said it was invalid, since he hadn’t been properly ordained.

But the Dutch came to the rescue, and not only ordained him in 1729, but validated his ministry before then retroactively. Boehm remained in Pennsylvania the rest of his life, and was committed to the Reformed churches, resisting the very thing that later Germans easily embraced, namely, efforts to unite the German-speaking Reformed and Lutheran (as well as the Moravian)—churches in the New World. But because the Germans were relative newcomers, his work—as well as that of other German Reformed pastors—remained under the auspices of the Dutch Reformed Church, which had arrived on the scene a hundred years earlier.

That name may just represent a town to many of you, but it gave its name to one of the most fascinating movements in American theological history. But before I talk about that, I want to broach another subject:

So picture a friendship in which one friend likes the other friend only because of what that friend can do for them. Maybe your friend gives you money, or feeds you, or drives you wherever you want to go. Maybe they provide all the emotional support you want, while you don’t have to give any in return. Now imagine that friend running out of money, or having their kitchen destroyed, or losing their driver’s license. Maybe that friend suddenly has horrible problems of their own and doesn’t have the emotional energy to listen to you. What kind of friend are you, then, if you dump that friend and find a new BFF?

The answer is, if you only keep up a friendship because of what another person can do for you, you’re really not much of a friend, are you? I think just about all of us want people to love us not based on what we can do for them, but on who we are.

Now having said that, I’ll introduce the theological movement I mentioned earlier—a movement called Mercersburg theology. It started when the Mercersburg Seminary of the Reformed Church hired a new professor. He was a Swiss man named Philip Schaff, and once in Mercersburg he pioneered a new approach to theology. I don’t have time to do this movement justice, but it had profound influence in two areas. The first was strictly theological. Philip Schaff taught that each movement in historic Christianity brought something important to the table—not least of which was the Protestant emphasis on Christ’s redemption and atonement. But, he said in a book called The Principles of Protestantism, the Reformation was incomplete. The time had come, he claimed, to unite what had been divided. In other words, Protestant and Roman Catholic teachings needed to be brought together in order to bring the church to the place where it should be.

It all sounds wonderful to our ecumenical ears. But there were those in his church who were scandalized by what he wrote. And so they held an ecclesiastical trial, in which both he and his books were found innocent of heresy. But the small minority who opposed him were never quite satisfied with that verdict. The church synod told them that if there was to be another trial, it would have to be conducted by the seminary where he taught. Needless to say, there was never another trial.

Also at that seminary was a theologian who agreed with him—an American of Scots Presbyterian descent named John Williamson Nevin. Nevin’s theological passion was Reformed worship, and he approached his chosen field from the standpoint of this new Mercersburg theology. And here’s where I want to refer back to what I said about friendship. Remember how I asked how you’d rather be appreciated as a friend—because of what you can do for another person, or for who you are? Well, Nevin claimed, Protestants concentrated far too much on what Jesus did for us. Of course it’s important that Jesus was incarnate, and that he lived and was crucified, died, was buried, and rose again. He denied none of those things. But he said that the atonement was brought about not by what Christ did, but who Christ was and is. We are saved not by the actions of Christ, but by the Person of Christ.

In Nevin’s book on the Lord’s Supper called The Mystical Presence, he goes to great lengths to explain and defend our theology of what happens in Holy Communion. But he also advances the idea that the atonement we celebrate at the table comes to us not through the work of Christ, but through his Person.

Based on Mercersburg theology, the Reformed Church in the United States produced a new liturgy that was an enormous departure from just about anything Protestants had adopted in the past. It was basically a Roman Catholic Communion service for use in Protestant worship. Needless to say, it took the focus off the pulpit and put it on the altar. And those who were opposed to it were really opposed to it. They promoted a separate liturgy and founded a separate college. To this day, Ursinus College and Franklin and Marshall College still exist, as does the Mercersburg Seminary… though the seminary has since moved to Lancaster, so that’s what we call it. But one of the more fascinating things about the old Mercersburg liturgy was that once Vatican II allowed Roman Catholic worship in a language other than Latin, a member of the old Reformed Church (or its successor the E&R Church) found themselves in a surprisingly familiar worship environment when they attended a Roman Catholic Mass.

In 1934, the Reformed Church entered into a union with another German immigrant church—the Evangelical Synod—and called the new denomination the Evangelical and Reformed Church. In 1957, this church joined together with the Congregational Christian Churches to form the United Church of Christ. We can still see German Reformed influence in the songs we sing, and in the official liturgy of the church. But perhaps the thing that stands out the most is our motto. Of all the movements that joined together on that summer day in 1957 to create the new denomination, it was the Reformed Church that had most enthusiastically embraced Jesus’ words in John 17:21, when he prayed for his disciples: They may all be one. As you, Father, are in me and I am in you, may they also be in us, so that the world may believe that you have sent me. Though we use the phrase, That they may all be one, as a rallying cry for the ecumenical movement, to Nevin and Schaff, those words had a mystical meaning, and promised us union with Christ, through which we become one with God and one with each other.

Through Christ, we are united with God, and in Christ we are called into union with each other. I hope learning a little bit more about our German Reformed ancestors can help us better understand why church unity is such an important part of our DNA, and why we can never be satisfied with the state of a church that is broken and divided along denominational lines.
—©2018 Sam L. Greening, Jr.