A Parody of True Religion 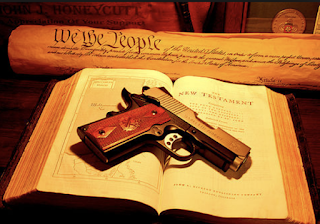 Junk food temporarily fills me up and I think I've eaten and am satisfied. But the reality is that it's covering a symptom (hunger) while causing other problems which won't manifest themselves until later (diabetes, heart disease... even cancer). Piety is like junk food for the soul. It makes me feel good about myself, it causes others to ooh and aah at how religious I am, how many Bible verses I know, how pretty my prayers are, or how frequently I post "God" or family or patriotic memes on Facebook. But it's all a cover-up for a sickness within me. When spread across an entire society, it becomes a parody of true religion, barely masking the disease. Eventually that disease will make itself known and incorporate the silliness (or danger) that is false religion into its very nature, causing faith itself to become something to deride.

This is the Christianity of 21st century America. Or at least what the majority of Christians have turned their Christianity into: internet memes, T-shirt slogans, ridiculous displays of prayer at high school football games, the right to refuse to bake wedding cakes, etc. This kind of Christianity has always had an undercurrent of violence and racism, but attempts used to be made to cover up the inherent hypocrisy. Now, however, the disease has taken over the body—and guns, bigotry, sexual assault, and bullying have all become integral parts of what masquerades as faith. And (surprise, surprise) this "faith" just happens to line the pockets of the rich and empower the powerful, while denying wholeness to the poor, the immigrant, the despised.

Compare American Christianity to the Bible's idea of religion. It's found throughout the psalms, but here at the end of Psalm 107, we read that

He pours contempt on princes and makes them wander in trackless wastes; but he raises up the needy out of distress, and makes their families like flocks.

The upright see it and are glad; and all wickedness stops its mouth.
Let those who are wise give heed to these things, and consider the steadfast love of the Lord.
✙ Ps 107:40-43 ✙

For the zillionth time, we read that God is the God not of the powerful, but of the needy. Princes are left to languish in the desert while the poor are lifted up and tended to. Who can appreciate this? The upright, i.e. those who can see things the right (read "genuinely biblical") way. The wicked are left speechless by what they used to think was nonsense. True wisdom, it seems, is found not in making the rich richer, all the while pretending that their good fortune trickles down to the powerless, but in showing preference to the needy. While American Christians consistently shriek Socialism! every time such a notion gets voiced, the scriptures continue to speak out to remind us that our ways are not God's ways, and God's glory is nothing like ours.

We have made a mockery of faith: Your Son lived a life of poverty and nonviolence, but we lift up violence as a way of life and think of greed as virtue; you call us to feast on your word, but we are gluttons for shallow slogans; you told us that when we minister to the least among us, we are ministering to Christ, but we pay homage to the rich and shame the poor for their own poverty. Have mercy on us, Lord: for we have brought dishonor on the church for which our Savior died. Even so, I pray in his Name who taught me to pray...