The first 6:06 of the audio is the reading of the passage from Ruth (with a relatively long introduction), and the sermon proper begins at 11:11. In between is a very nice anthem by the women of the choir as well as a reading from Mark's gospel.


The women of the neighborhood gave him a name, saying, ‘A son has been born to Naomi.'
—Ruth 4:17 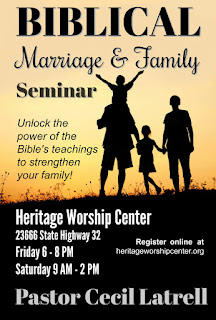 It seems strange to me, but there are people today who would present the scriptures as a how-to manual on marriage and child-rearing. This, despite the fact that there’s not really a single passage that could pass as such in the entire 66 books of the Bible. Perhaps the closest thing to such real advice is found at the end of the fifth chapter of Ephesians and the beginning of chapter six. Here we find husbands being told to love their wives. So far, so good. But wives are told not to love, but to obey their husbands. Here we also find children being told to be obedient. But in that same passage, slaves are told to obey their masters. So what we find here is indeed a brief manual on domestic life. But it is far from the kind of domestic life we think of as being consistent with a just society. To use it, we would have to cherry-pick verses that seem to agree with what we already think, and avoid others like the plague—and even the cherry-picked verses could prove injurious (as indeed we now have to acknowledge they have) to women who are encouraged to stay with abusive partners.

Not only is the Bible a poor manual on marriage and child-rearing, but can you think of a single scriptural marriage worth emulating? Most of the patriarchs had more than one wife, but even the monogamous ones were nothing modern couples would see as a healthy example. At one point, for example, Abraham was willing to hand over Sarah to be raped in order to save his own skin. And let’s not forget about poor Hagar—Sarah’s slave—who was impregnated by Abraham, and then banished to the desert with the baby. Isaac and Rebekah come closer to the mark. But even in their case, Rebekah deviously tricked her husband out of his choicest blessing—the one he’d intended for Esau—in order to place Jacob ahead of him in the succession.

Things aren’t much better in the New Testament. Jesus isn’t married, and there’s no mention of any other disciple’s spouse. Though, since Peter does have a mother-in-law, we assume that he either does have or once had a wife. Others would say the Holy Family is the perfect example of a human family, but I’m no sure how any of us could expect to put those principles to work in our own lives. The next time an engaged woman becomes pregnant by the Holy Spirit, marries her fiancé anyway, then gives birth to the Son of God, I suppose they can fill us in on how the first chapter of Matthew and the second chapter of Luke work as a biblical guide to family life. 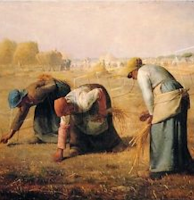 Which brings us to the Book of Ruth. There is nothing specifically horrible in today’s story—the one about Ruth and Boaz. But I hope God will forgive me if I still find it a bit creepy. Ruth is destitute and dependent on Boaz’s charity. And so she sneaks under his blanket at night. The result is what one might expect… but at least he has the decency to marry her. There’s no reason to condemn either party, but I certainly don’t recommend this as a scriptural guide to either dating or marriage.

What is interesting, though, are the healthy same-sex relationships we find in the Bible. David and Jonathan were so close that when Jonathan was killed in battle, David’s lament has gone down in history as one of the most beautiful expressions of human emotion: I am distressed for you, my brother Jonathan; greatly beloved were you to me; your love to me was wonderful, passing the love of women [2 Sam. 1:26]. And because it’s very difficult to find any example of healthy marital love in in the Old Testament, one of the most frequently chosen readings for wedding ceremonies has been Ruth’s declaration of commitment to Naomi. I quoted it earlier from the NRSV, so let me read it to you again, this time in King James English: Intreat me not to leave thee, or to return from following after thee: for whither thou goest, I will go; and where thou lodgest, I will lodge: thy people shall be my people, and thy God my God: Where thou diest, will I die, and there will I be buried: the Lord do so to me, and more also, if ought but death part thee and me [Ruth 1:16-17]. 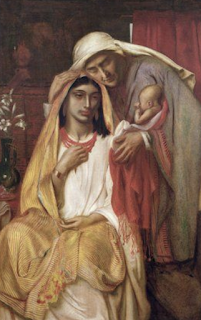 David and Jonathan, I don’t know about. But I don’t want to imply that there was anything romantic about the relationship of Ruth and Naomi. In their case, it was pretty clearly the love of a daughter for a mother and of a mother for a daughter, even though there was no biological connection. Fate had thrown these two women together, and they very much depended on each other. Apparently no two people in the Bible could trust each other more. And God blessed their trust with a marriage and a child. So close were these two women that when Obed was born, the other women of the community proclaimed not that Ruth had had a baby, but that a son had been born to Naomi. And since we can’t forget the horrible plight of widows in those days, we can rejoice that Obed was in the practical since—and this is what was being acknowledged in the neighborhood women’s proclamation—Naomi’s redeemer. Her male heir—who was no less Ruth’s male heir—gave a future to a woman who was otherwise without hope. In a very real sense, Obed indeed had two mommies. So if we want a biblical example of family, I’m happy to put Ruth, Naomi, and baby Obed forth as one of the most beautiful. It took two women to bring Obed into the world, and it took a village to celebrate the meaning of his birth.

No less beautiful, however, was the implication for the future. At the end of Ruth, we discover who Obed really was. He grew up and had a son named Jesse, and Jesse grew up and had many sons, the youngest of whom was a ruddy-cheeked shepherd boy named David. And David grew up to become king of Israel and the founder of the royal house out of which Jesus the Messiah came. There’s a special message for us today—we who are being trained to hate and fear immigrants like never before. The grandfather of the founder of the House of David was born of an immigrant woman, who journeyed from Moab to Israel as a nobody whose only hope was to follow those harvesting the fields in order to collect leftover food. There were no dumpsters a thousand years before Christ, but certainly this was the ancient world’s version of a dumpster diver. And yet within her was the redeemer of Naomi. And within her was the royal ancestor of the redeemer of the world. 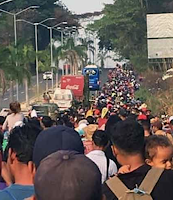