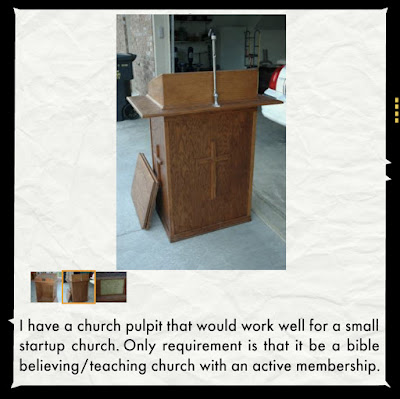 Teach me good judgment and knowledge, for I believe in your commandments.
✙ Ps 119:66 ✙

What does it mean to believe God's commandments? I thought of this a while back when I saw an ad in the "free" section of Craigslist for a church pulpit: "Only requirement is that it be a bible believing/teaching church." I'm not looking to start a new church (or start preaching at a temporarily pulpit-less one), but I suspect that if I decided to take this particular vendor up on her offer, I might not be able to meet her sole criterion... at least not in the way she intended it.

Now I think I believe the Bible (note capitalization) as much as the next person... maybe even more than the average next person. But those who use the phrase "Bible believing" usually emphasize certain aspects of belief in the scriptures that I don't, all the while ignoring others that I believe in very strongly. For example, I've noticed that "Bible believing" churches claim to take the Bible literally, condemning as non-believers those who don't make this claim. Such churches often teach that Christian women have to submit to men, that marriage must be between one man and one woman, and that women don't have a right to choose what happens to and within their own bodies. Some of these beliefs are more scripturally defensible than others. But one that is indefensible is the conflation of the cross and the flag—for most such churches also emphasize patriotism. Many (most?) even promote gun ownership—some to the point of holding raffles with guns as prizes. Gun ownership is a thing indifferent, as far as I'm concerned, as long as guns aren't made into an idol. But to pretend that Jesus would have promoted it is incompatible with the Jesus I read about in the gospels.

At my most impatient, I am a little too quick to point out that many such churches were also "bible-believing" enough in the 1800's to defend the institution of slavery, which—let's admit it—is compatible with both Old and New Testament teachings. What few of these churches will admit is that they either ignore other very important commandments of God or distort them to the point that they're unrecognizable.

My idea of what it means to say "I believe in your commandments" is quite different, I suppose. I admit I choose to overlook certain commandments even as I emphasize others. I don't try to distort those that I don't follow. I simply admit that life in the 21st century of our Lord is very different from what it was like to live in the 15th century before Christ's birth. I am not going to waste time defending commandments against cutting the corners of my beard, wearing blended fabrics, and eating rock badger, all the while promoting the death penalty for disrespectful children or two men caught making love—not to mention forcing women to marry their rapist. Those are all in the Bible. They reflected the civic and religious life of a particular nation many centuries ago. But I believe humanity has grown in its understanding of justice over the last 3000+ years, and so I don't hold myself (or anyone else) to laws that no longer edify (if they ever did).

But I do hold myself accountable for commandments to seek justice, rescue the oppressed, defend the orphan, plead for the widow; not to discriminate against foreigners; and not to return violence for violence. I admit that I don't follow these commandments perfectly, but I believe them, and would challenge all Bible believers to emphasize these biblical passages no less than their current favorites.

I may have misjudged the generous pulpit owner. Perhaps she was hoping to hear from an LGBT-friendly church that insisted on equality for women and offered itself up as a sanctuary for undocumented immigrants. But I'll never know now—the ad has been removed from Craigslist. But at least she and her free pulpit helped me think about how it is I believe in God's commandments.
Forgive me, Lord, when I allow others to misrepresent you in the world. Grant me not only more knowledge of your word, but better judgment in the ways I demonstrate my belief in your commandments; for I pray in his Name who taught me to pray...