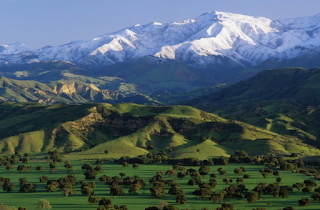 Those who trust in the Lord are like Mount Zion, which cannot be moved, but abides forever.
As the mountains surround Jerusalem, so the Lord surrounds his people, from this time on and forevermore.
✙ Ps. 125:1-2 ✙

Psalm 125:1 is a bit ironic, considering that the name Mount Zion has historically been applied to three different hills in or near Jerusalem. Thus it appears that it can indeed be moved. But if I look at it differently, I might think about the Christian concept of Zion, which refers not to a geographical feature, but to the invisible church—that is, not the institutional church with all its inconsistencies and shortcomings, but the church chosen by God which we can only hope during our earthly lives that we're a part of. Indeed, this Mount Zion cannot be moved. It has existed before time began and it will never end, and its numbers have never been altered.

The physical Mount Zion, whichever one I'm referring to here, is by no means the highest mountain—in fact it's not even among the top ten—in Israel. And so verse 2 makes sense in that, though God's elect (Zion) be exalted, they are surrounded by something even taller, that is, the very God who lifted them up in the first place. And so the church is firmly established and it is encompassed by the Triune God, embracing and protecting her now and forever.

God of power, you are strong to save, and you never fail those who trust in you. Keep me under your protection even as you spread abroad your reign of peace; through Jesus Christ, who taught me to pray...
✙ Celebrating Common Prayer, Soc. of St. Francis (alt.) ✙