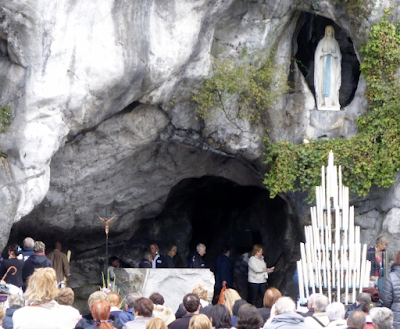 Blessed be the Lord from Zion, he who resides in Jerusalem. Praise the Lord!
✙ Ps. 135:21 ✙

It seems primitive, somehow, to modern Christians for Israel to have claimed one spot on earth as God's dwelling-place. We, of course, know that God is everywhere, and is not limited to one home built with stone and wood. But of course the ancient Hebrews also knew this. What we interpret as primitive was probably a necessity back then. The belief that God could be worshiped anywhere and everywhere did not necessarily help preserve monotheism. When people felt that a particular location was holy and were free to sacrifice to God on that spot, it quickly degenerated into a belief that that spot was holy to a particular god, while that other spot—the one on the next hilltop or beside that spring down there—was holy to another god.

We still see this tendency when saints are venerated in our own day. There are people who believe this or that location is sacred to a particular saint, and that there's power inherent to objects brought from that spot. Water from Lourdes, for example, is somehow more powerful than water from the tap—or a simple prayer offered in faith, for that matter. I could be wrong in my understanding, of course, for this is not necessarily the way Roman Catholics understand the veneration of saints (but they could also be wrong, so the blame doesn't always lie in my lap).

I think the best way for the average Protestant to understand Psalm 135:21 is the way we view the ordained ministry. Jerusalem was ordained as the place to sacrifice to God. Allowing other high places was taking a chance that the worship of God would become misunderstood, or that other gods might come to be worshiped. When the church educates certain individuals and then ordains them to preach, to teach, to baptize, and to celebrate the Supper, it is not saying that these people are better than others, or that the knowledge of God is exclusive to them. It's simply saying that this is the way we're keeping the faith. As far as our proclamation goes, the Second Helvetic Confession puts it in these intimidatingly awesome terms:

It's important that I understand my own calling not as a contradiction of the calling of others, for God calls whom God pleases, and God's holiness cannot be contained by a single church, much less by one individual or class of individuals. But it's also important that I respect the importance of God's (and the church's) act of entrusting certain responsibilities to certain people. If we are one body with many members, and each member is needed to make the body whole, then ordination is the church identifying certain gifts in certain people, and blessing their use of those gifts to benefit, represent, and speak for the church.

Thank you, Lord, for all the ways you safeguarded the faith that I have inherited. May I also respond to your call on my life, that I may be a true member of Christ's body; in his Name I pray who taught me to pray...