The Terror of the Good 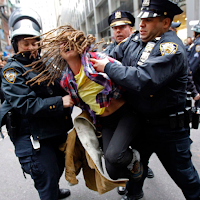 Deliver me, O Lord, from evildoers; protect me from those who are violent, who plan evil things in their minds and stir up wars continually.
They make their tongue sharp as a snake’s, and under their lips is the venom of vipers. Selah
Guard me, O Lord, from the hands of the wicked; protect me from the violent who have planned my downfall.
The arrogant have hidden a trap for me, and with cords they have spread a net, along the road they have set snares for me.

I say to the Lord, “You are my God; give ear, O Lord, to the voice of my supplications.”
O Lord, my Lord, my strong deliverer, you have covered my head in the day of battle.
Do not grant, O Lord, the desires of the wicked; do not further their evil plot.

Those who surround me lift up their heads; let the mischief of their lips overwhelm them!
Let burning coals fall on them! Let them be flung into pits, no more to rise!
Do not let the slanderer be established in the land; let evil speedily hunt down the violent!
✙ Ps. 140:1-11 ✙

One old commentary called Psalm 140 "the cry of a hunted soul," saying that "few short Psalms are so rich in the jewelry of precious faith." While this may be true, it is also a rather vengeful psalm.  The psalm is said to be of David, though it doesn't specify who his enemies are. But we see they're bad. Referring to these "men of false and cruel tongues," Charles Spurgeon said that

while they are alive they are the terror of the good, and the torment of the poor. God will not allow the specious orators of falsehood to retain the power they temporarily obtain by their deceitful speaking. They may become prominent, but they cannot become permanent. They shall be disendowed and disestablished in spite of all that they can say to the contrary. All evil bears the element of decay within itself; for what is it but corruption? Hence the utmost powers of oratory are insufficient to settle upon a sure foundation the cause which bears a lie within it.

Knowing that such men are in charge of my own country, I find these words strangely reassuring. Though it seems permanently entrenched, evil is nonetheless fleeting. There is no true constancy in it. Perhaps this is why, whenever the psalms mention God's love, they always call it God's steadfast love. Unlike human evil, it is stable and cannot be shaken. As long as I trust in it, I need not fear men (or women!) of false and cruel tongues.

Thank you, God, that you love the poor and those who are oppressed. May all who are threatened this day feel your presence and trust in your protection. I ask this in the Name of Jesus Christ, who taught me to pray...