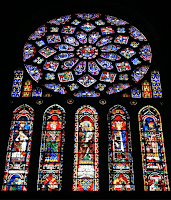 A friend of mine texted me on Monday, saying, “Notre Dame is on fire,” followed by a crying emoji. Well, since my alma mater is in the same conference as Notre Dame, I assumed we must be playing them in baseball, and that Notre Dame was winning big. It surprised me a little, though, because my friend had never bothered to text me about college baseball before… but I was too busy to look up the score. It wasn’t until later that I found out that her text was about the cathedral, not the college. And that the fire was literal, not figurative.

We all know, I hope, that the church is a people, and not a building— and that it’s in the people of the church that the Holy Spirit dwells, and not in any wood or bricks that surround us when we gather under one roof. And yet, those of us who worship under this roof understand the love we have for our church home, for it's where our family gathers. When you think of all the holy events, all the answered prayers, all the hours of meditation, all the epiphanies had and tears shed within the walls of the Cathedral of Notre Dame in Paris, it’s no wonder that the reaction to its loss has been so intense— it’s not just a building, after all, it’s the symbol of a city… perhaps even a whole country.

But Notre Dame isn’t France’s only beautiful church. There are many others. And even before Notre Dame burned, I had planned to talk about one of them in my Easter sermon. It’s also a Gothic cathedral, and it’s at least as beautiful as Notre Dame. It’s located about 50 miles outside of Paris in the city of Chartres. This church is known for many things, but it’s perhaps best known for its stained glass— most of it nearly 800 years old. Its windows are considered by many to be the most beautiful in the world, and it’s a miracle that they’ve survived into the present day.

The stories of their survival are fascinating in and of themselves— especially the 20th-century stories, because two world wars were fought in the last century, and much of the fighting was done near Paris, sometimes right in Chartres.

You see, the people of the city knew what might happen— what probably would happen—to the windows that had inspired them and so many others over the centuries. The destruction was as likely to be due to intentional destruction as it was to collateral damage from bombs. And so twice in the 20th century, they dismantled their stained glass windows, piece by piece. Then they labeled the pieces and hid them deep underground in nearby mines until the wars were over. And then, they carefully placed them back in the windows, each in its proper place, and suddenly, stories that appeared to be lost, were being gloriously retold again in the beauty of 13th-century stained glass.

A writer once told how he watched as tour guides led people down the center aisle of the cathedral’s nave, talking quietly about the church, all the while directing their attention away from the windows, supposedly to let their eyes adjust to the dim light. After fifteen minutes of this, the guides would then tell the tours to turn around in order to behold what it was they’d actually come to see.

“When they turned,” he said, “the faces of both men and women were alive with subdued curiosity. Most became quickly solemn—not sad, usually, but serenely solemn. Some showed surprise, turning gradually to elation. Others seemed to suspect a trick. Occasionally, the light caught a flash of tears. Most common, I think, was a "Chartres expression." As well as I can describe it (having worn it myself), it is a combination of awe and tenderness.”

Keep this in mind, then as I read to you from the 3rd chapter of Paul’s letter to the Colossians, the first 4 verses:


SERMON
Last week, I talked about the children’s Palm Sunday praises— as one old hymn puts it, “the simplest and the best.” And I asked if this unfeigned, unhesitating, uncalculating praise weren’t perhaps the reason that Jesus told us that we needed to become like little children in order to enter God’s Kingdom. So perhaps Paul’s words to the Colossians, seen through stained glass windows of Chartres, offer us a clue as to why this is so. 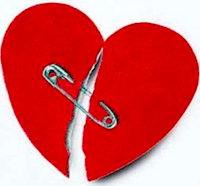 My prayer for illumination this morning was Psalm 86:11, which asks God for an undivided heart— and to me an undivided heart is a childlike heart. This isn’t the same as saying an immature heart. It’s asking for the kind of heart we’d have If we hadn’t felt the need to hide parts of ourselves, to squirrel bits and pieces of ourselves away so that parts of us couldn’t be seen or discerned. We all hide parts of ourselves from other people. But we also think we can hide them from God… and even from ourselves.

Some of these things, of course, are destructive or hurtful. But when we think about it, much of what we hide is our innocence, or other stuff that makes us vulnerable, or the wounds that we have received in life. Sometimes it’s simply who we are and are afraid to be in the presence of those we mistrust— or even, sometimes, those we love.

When we were children, of course, we had no need to do this. But as we grew up and discovered all the things others didn’t approve of, the ways that others judged us, the things in others and ourselves that we were afraid of, we felt the need to squirrel away different pieces of ourselves in places where they wouldn’t stand out… and often in places where they wouldn’t be seen at all.

But to believe in the resurrection is to realize that our brokenness is not the end of the story. Christ, the Son of God, is also the Son of Man. When he was raised from the dead, it wasn’t for the benefit of God. It was for the benefit of humans that death was conquered. To set your mind on things that are above, as Paul puts it, doesn’t mean to be holier than thou and pie-in-the-sky. It means to quit hiding from God, and to turn from that which has divided our heart and held us down, and instead face the One whose resurrection has put it all back together.

Like the tourists in Chartres, turning around and facing the full glory of the stained glass for the first time, on Easter morning we see the One whom death could not corrupt, the undivided One, the One who grants us wholeness. Today we may remember our shame, our fears, our wounds, our hidden selves. And we receive back all those buried parts. Some are made more beautiful, some are transformed, some are left just as they always have been, and, indeed, some, we are told, are of no use to us and need to be let go of.

That’s what Paul meant when he told us our lives were hidden with Christ in God. And today we celebrate the fact that Christ has been revealed to us, and in him, we are revealed to one another and to God. For alleluia! Christ is risen; the Lord is risen indeed! 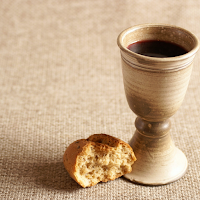 The gifts on the table consist of the scattered grain brought together to make bread, and the fruit of many vines pressed to make a single vintage. In the same way, our own scattered lives are brought together in Christ so that we, who are many, become one, for we all partake of the same loaf and drink from the same cup: The bread which we break becomes a sharing in the body of Christ, and the cup over which we give thanks becomes a sharing in his blood. Everyone is welcome at this table to taste and see that the Lord is good: All are happy who take refuge in God.

*Charles Quattlebaum, The Bedazzling Windows of the Cathedral at Chartres, The Washington Post (17 May 1987)