On Having the Poor with You

There seems to be a connection between this story in John 12 and the one in Luke 10, where Jesus is visiting in the home of Mary and Martha. There we find Martha serving and Mary at Jesus’ feet, listening to him teach. In that story, we can take the expression “sat at Jesus’ feet” somewhat figuratively, since that common expression probably simply meant to be in an attitude of listening and learning.

But here in today’s story, we find Jesus in the same house with Martha serving once again. Here we find not only Martha’s sister Mary, but also her brother Lazarus at the table with Jesus. But what happens next places Mary at Jesus’ feet in a very different way, for she anoints his feet with a huge quantity of very expensive perfume—so much perfume, in fact, that the scent fills the entire house.

I don’t know what nard smells like, but the Chinese call it sweet pine, which sounds rather pleasant. But there can be too much of a good thing, and this may be one of those instances.

Whether or not the smell was too much is immaterial, however. Because Mary’s actions were themselves over-the-top. It was shocking to those who witnessed it. And, let’s face it, it’s shocking just to read about it 2000 years later. It appears that the room was left speechless watching Mary’s display of devotion. The only one who could find their words seems to have been Judas, who, we’re told, acted as treasurer for Jesus’ little band of disciples.

“What a complete waste of money!” he said. “Do you realize how many mouths could’ve been fed for the amount of money wasted on that perfume!?”

And then begins a discussion we feel much more comfortable with than Mary’s anointing of Jesus’ feet… A discussion of economics. Can an evil person make a good point? It seems so, because we can’t help but agree with Judas. And what Jesus said next has haunted the church ever sent: “Leave her alone,” he said. “She’s just anointed my body for its burial. The poor you’ll always have with you, but you won’t always have me.”

Most of us cringe at this saying. But few of us look at it in context. In many places in the gospels, when Jesus quotes Hebrew scripture, he makes it obvious by saying something like, “It is written…” But here he doesn’t do that. But what he says is straight from Deuteronomy 15. In that chapter, Israel is given two rules: First, be generous toward the needy; and second, every seven years, forgive debt. This little section ends with this saying: “Since there will never cease to be some in need on the earth, I therefore command you, ‘Open your hand to the poor and needy neighbor in your land.’”

The point here is that economic justice is something that God’s people are always going to have to work for. It was true in Moses’ day. It was true in Jesus’ day. And it’s true in ours. So the work of justice is ours, no matter when or where we live. And it’s not ours in theory, it’s ours in reality. And this is where Judas is exposed, I think. And it’s where many of us are exposed. Judas is quick to criticize Mary for not doing the work of justice. And Jesus’ response is that what Mary did does not prevent Judas from doing that important work. “You want to help the poor, Judas? They’re there. Always. Right outside the door. You can help them any time you want.”

And what happens in this story is something I’ve witnessed in churches throughout my life: A beautiful church with lots of liturgy and expensive vestments does not take money from the work of justice in order to have elaborate worship. Many of those churches have more outreach to their communities and to the world than simple churches with no liturgy and no vestments. It’s not a matter of money, therefore. It’s a matter of attitude. 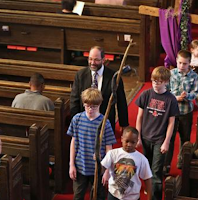 And this notion of self-offering is important, because it makes me think of a friend and colleague in Indiana. He’s the pastor of a large and beautiful urban church that’s known more for its ministry to its neighborhood than it is for its beauty. Lots of churches address the need that surrounds them, but this congregation is different: it addresses abundance. They used to ask people what their needs were. But they realized that the kind of relationship that had developed between them and their neighbors wasn’t necessarily a healthy one. And so they changed the way they treated people and it started with the kinds of questions they asked. They stopped asking people what their needs were, and started asking what their gifts were, what their hopes were, what their dreams were.

And this, I think, brings us back to today’s story from the Bible. Mary had something to share. Maybe she knew why Jesus might need it. Maybe she didn’t. But she shared what she had, and Judas criticized her. He didn’t value her gift. He could’ve done a much better job spending what Mary had spent. I guess he was kinda bragging when he said he’d have used that money on the poor.

And so today we’ll remember how the earth has shared its bounty with us, and how we have presented the work of our hands to God. And then we’ll make connections: We’ll take all those things and realize that it’s not we who are sharing, but Christ who is giving to us. Let us remember his gifts, for he is indeed the One whose love was so great that he gave his life for his friends.