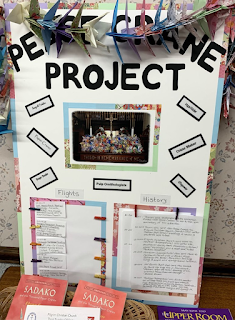 I have served two different congregations in Latin America that were comprised of more than one denomination. And so, with this experience under my belt, I was pleased to be called as the new pastor of Pilgrim Christian Church in Chardon. It, too, is comprised of more than one denomination—in our case the United Church of Christ and the Christian Church (Disciples of Christ).

Denominations aren’t as important in our minds as they used to be. But sometimes, through our connections, they help us see what it means to be the people of God, even when God is hard to find. For instance, a few years ago—before I ever arrived on the scene—Chardon experienced a tragedy. A few weeks later, the members of Pilgrim Church were surprised to receive a thousand origami peace cranes in the mail. This gift was a reminder that another congregation of the United Church of Christ that had experienced a similar tragedy was holding us in prayer and sharing with us Christ’s vision that peace would someday prevail on earth.

This symbolic prayer for peace has its origins in the work of a Japanese girl named Sadako Sasaki, a victim of the long-term effects of the nuclear bomb that fell on Hiroshima in 1945. As a visible and tactile prayer for peace, she folded a thousand of these orizuru. Though she died at the age of twelve, her project has been kept alive all over the world. Wherever tragedy strikes, she and her folded cranes have become a sign of hope and solidarity across religious, cultural, and national boundaries.

Our people found this so meaningful that we have continued the tradition that was shared with us. Those original 1000 cranes that we received have since passed through the loving hands of UCC congregations in Newtown CT, Boston MA, and Ferguson MO. In addition, we have also sent a thousand cranes each to Christian churches in Las Vegas NV and Parkland FL as well as to a synagogue in Pittsburgh PA and two mosques in Christchurch NZ. A thousand more will soon be blessed and sent to Virginia Beach VA.

Though we pray that each set of cranes will be the last, we will nonetheless seek ways of being faithful until God’s reign is known in its fullness.