Jesus, Our Lens and Filter 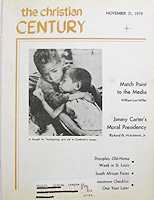 Religious magazines and newspapers used to be very important. They were very often the mouthpieces of the various denominations. Back before we began to prefer radio and television to the printed word, we had all kinds of choices in what we might read. And the various churches were happy to do their part to supply us with reading material.

But even after we began to choose listening and watching over reading, churches still kept us up-to-date with denominational news or inspiring stories in weekly newspapers or monthly magazines.

The internet, of course, has pretty much put an end to all that. We can usually still find the news and inspiration that used to get printed. But stuff like that is now online. We no longer share little clippings with each other. We just email (or text) each other links to articles we’ve read on this or that website.

One exception, however, is a magazine called The Christian Century. It’s published every-other-week, and it’s a thoughtful source for Christian news and religious trends. There are other Christian magazines still being printed, but this is the last of the progressive ones that I know of.

The Christian Century’s history is rather interesting. It was founded in 1884 as one of the mouthpieces of our own denomination—or at least one of our denominations: The Christian Church (Disciples of Christ). About twenty years after that, however, it was sold, and became an independent publication. This allowed it to become a source of news and opinion for people in just about all the mainline Protestant churches—a position it’s held up to the present day.

So this means that during both world wars, pastors like me were turning to The Christian Century—not for entertainment, exactly, but to be informed.

The reason I’m talking about this today is because of something that happened between the two world wars, when the Japanese empire began to extend itself into China. This, of course, happened violently, and news of the atrocities shocked the world. “We have to do something!” many people began to say. But others had had enough of war, and said that the best chance for peace was not to respond militarily.

Among this second group was a pastor in the old Evangelical Synod—a predominantly German church that entered the United Church of Christ (our other denomination) in 1957. This pastor just happened to be a professor of ethics at Yale Divinity School, and his name was Richard Niebuhr. He shared his views in The Christian Century, and called for a radical trust in God. There is no such thing as a just war, he said, and even when we do nothing, we’re doing something.

But it didn’t stop there. His brother was also a pastor in the Evangelical Synod, and he was also an ethics professor—not at Yale, but at Union Seminary in New York City. His name was Reinhold Niebuhr, and Reinhold responded to his brother Richard on the pages of the same magazine. Reinhold acknowledged that Richard was probably a better Christian than he was, but he believed his brother was too idealistic—that a more practical approach was necessary when facing such atrocities. Sometimes, said Reinhard, we just have to get involved.

The exchange between the two brothers was something the entire nation seemed to be aware of. It reflected a national debate, and helped people work through their own emotions and beliefs. By reading the words of two thoughtful brothers talking through a controversial issue, people were given a model for their own conversations—or even their own internal debates. We don’t realize it now, but when they were in their prime, the Niebuhr brothers were religious superstars.

I think about that during periods when we see an escalation in the clamor for war. There are still thoughtful men and women who speak or write with honesty and clarity about how they approach the subject of war, but we seldom hear or read their words. Occasionally dispenses to us a soundbite from a religious leader. But it’s just an occasional one-liner—often a “zinger”—that does nothing to help us work through our own thoughts.

And our thoughts are on war and peace these days, aren’t they? When I included the last line of this week’s appointed psalm in the call to worship, I wondered what effect they might have on those of us who read them: May the Lord give strength to his people! May the Lord bless his people with peace! [Ps. 29:11] Though today’s theme is supposed to be the Baptism of Jesus, instead of the gospel story of that baptism, I chose to preach on the appointed reading from Acts, in which Peter talks about what that baptism means. And one verse of that reading stood out to me: You know the message he sent to the people of Israel, preaching peace by Jesus Christ—he is Lord of all. My translation says “by Jesus Christ,” but a better translation would be “preaching peace through Jesus Christ,” or “by means of Jesus Christ.”

And so Peter, in a sermon very shortly after the death and resurrection of Jesus, stated that the core of the gospel was the fact that God’s word to us was mainly a message of peace, and that that peace was to come about by means of Jesus Christ, the One who told us to turn the other cheek, who told us to love our enemies, who in the face of certain execution said nothing in his own defense.

Christianity is easy, right? Except it’s not. In Acts 10, Peter said that God’s word to us was a message of peace—and that peace came about by means of Christ, the One who said, Do not think that I have come to bring peace to the earth—I have not come to bring peace, but a sword… one’s foes will be members of one’s own household. [Matt. 10:34, 36b] Jesus may also have said, Take my yoke upon you, and learn from me... For my yoke is easy, and my burden is light. [Matt. 11:29a, 30] But by that he certainly didn’t mean to say that following him would make us thoughtless.

And here is where I think the Niebuhr brothers best modeled for us what a Christian thought process might be like. In sending us the Prince of Peace, God’s message to humanity is first and foremost a message of Glory to God in the highest, and on earth peace to people in God’s good graces. [Luke 2:14] But that message is not to be received mindlessly, because the Prince of Peace comes bearing a sword.

Now this sword probably isn’t what you’re thinking. It’s not a weapon of death and destruction. It’s a tool to be used for discernment. It cuts away falsehood from truth. This was a very common way the symbol of the sword was used in ancient times, and that Jesus meant it in this way is also found in the Letter to the Hebrews: Indeed, the word of God is living and active, sharper than any two-edged sword, piercing until it divides soul from spirit, joints from marrow; it is able to judge the thoughts and intentions of the heart. [Heb. 4:12]

Whether it’s a discussion in front of a national audience, a conversation between friends, or something we’re trying to work out in our heads, Christians must make decisions on important matters by means of the One we call our Lord, our Sovereign, our Savior.

But not just that, but we must also be possessed of the grace to allow others to do the same. Perhaps our lesson to others will not be the decision we arrive at, but the love we share even when we come to differing conclusions.

Let us never use the opinions of politicians as the filter through which we make decisions, nor view other humans or critical situations either first or last through their eyes. Remember, the first representative of Christ Cornelius heard from was Peter. And one of the first things Peter told him, his friends, and his family was that the peace they were searching for was the very message that God had for them… and that it came to them by means of Jesus Christ.

May Jesus be our way to peace. And may we trust that, no matter where we come out in our decision-making process, we cannot deny the presence of Christ in the discernment process of a brother or sister in Christ.