So we all know the story of the Woman at the Well. A lot of what we know is right there in the story. One of those things is that Jesus is not supposed to talk to her. The woman herself beats John to the punch: Why are you even talking to me? she says, after Jesus asks for a drink. And then John adds 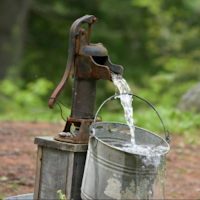 that Jews and Samaritans aren’t on speaking terms. Though he doesn’t mention that neither were men and women in that place and time, most of us remember that that’s also the case.

But some of the stuff we know is stuff we’ve never been told— at least not by the Bible. One of those things is that she’s been shunned. That’s why she has to go to the well to get water in the heat of the day. She’s immoral, and the reason becomes clear: she’s been married to all those men!

But let’s look at that more closely. And by “more closely,” I mean let’s see how other parts of the Bible might help us understand this better. And let’s start at the beginning—way back in the Law of Moses.

In the 25th chapter of Deuteronomy, we read of a law that requires a childless woman whose husband has died to marry his brother. Then any children she has will be assigned to her dead husband, so that his line will be continued. This sounds rather obscure to us, but we see in Luke 20 that this law was still valid in an exchange between Jesus and the Saducees. Jesus believed in the resurrection of the dead, but the Saducees didn’t. And so they ask Jesus a hypothetical question— probably to poke fun at him: Let’s say there are seven brothers, and the oldest one dies childless, so his wife has to marry the second brother, who also dies childless. This goes on until the woman has married all seven brothers, none of whom has any children. After they’re all dead, whose wife will the woman be? Jesus says the answer is none of them, because there will be no marriage in the resurrection. 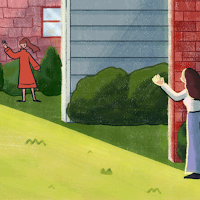 This marriage custom which ties a woman to a family like this is called levirate marriage. And since the Samaritans trace both their ancestry and their religion back to the same origins as the Jews, they would’ve had the same custom. Rather than condemn the woman at the well as immoral— which neither Jesus nor the gospel of John do, by the way— perhaps we should consider the fact that she’s probably the victim of an unjust law. The way I look at it, she doesn’t go to the well at noon because she’s being shunned, but because she’s doing something all of us are being told to do these days: she’s social distancing, because, quite simply, she’s tired of being the butt of everybody’s jokes.

It’s no joke, however, that social distancing has become a thing with us. There’s a pandemic right now, and we’re frightened. Social distancing is really the very least we can do t o stop the spread of a virus that’s moving across the globe faster than we can contain it. Economies are tanking, events are being canceled, and schools are closing as the world appears to be shutting down.

The last time I think anything like this happened was for a very different reason. It was almost twenty years ago in 2001, when terrorists attacked New York and Washington on September 11. You’ve all heard my experience of 9/11, but I want to remind you of it, because there’s something about it that’s relevant.

I was on a flight from Germany to New York that morning when U.S. air space was closed, and my plane was diverted to Newfoundland. I was a refugee there for five days before we were allowed to take off again. But while in Newfoundland, I and the thousands of others who were stranded in the town of Gander were treated with unheard-of kindness and generosity. It made a horrible and frightening situation not just bearable, but unforgettably wonderful.

Kindness didn’t cancel out the terrorist attacks. But it did transform the experience of some of its potential victims. And I suspect that it can transform our lives in the days and weeks to come as we deal with the pandemic. How different our future memories of this period will be if we treat each other gently and with good humor, with the same kindness and generosity that the citizens of the island of Newfoundland treated their unexpected visitors after September 11, 2001.

Who knows how this thing’s going to play out? Who knows what we’re going to be called upon to do? Nobody knows, but one thing I will predict: Anger and impatience and selfishness are going to have no place in anybody’s response.

So in the days to come, let’s be generous. I don’t know what forms generosity’s going to take during a pandemic. But I’m sure there’s going to be a prominent place for it.

Let’s be patient. Lots of people are going to be put out and put upon. Those who deal with the public are bound to be overworked, and many of the people they deal with are going to be rude and unwilling to understand what they’re going through. Let’s not be one of those people.

Let’s be appreciative. Americans love to worship heroes, and we make a big deal out of those who serve in the military— and rightfully so. We should be grateful to those who put their lives on the line for others. But isn’t that exactly what anybody’s now doing who works with the public? I was at the grocery store the other day, and I was thinking of the stockers and the people at the cash register. They’re so close to hundreds of people every day, touching objects that have been handled by an untold number of others. That’s just one business. Think of all the other people who risk their health because either they’re brave, or they can’t afford the luxury of social distancing. Either way, show your gratitude. And let’s do all we can to make their jobs easier.

In the early part of the last century, a French priest named Pierre Teilhard de Chardin said that, “driven by the forces of love, the fragments of the world seek each other so that the world may come to being.” [1] I thought this was beautiful. And very meaningful for the day we live in. Every day is a new day, certainly. But this is especially true after a crisis. This pandemic is but the labor pains of a new day coming into being. Fear is driving people apart, leaving many in isolation. But love draws the remnants together to do something new and to be who God intends them to be.

In Bible study this past week, somebody pointed out something that really hadn’t occurred to me. The Samaritan woman came to the well at noon, and I could think of two possible reasons why: Either she had been shunned, or she was practicing social distancing. But a third possibility exists, and it’s the simplest—but also requires the most faith: It’s possible that she came at that hour because God had called her to meet Jesus.

And really, this makes the most sense. Because it was to this despised foreigner, this woman who’d had five husbands and who was living with a man who was not her husband, that Jesus first revealed that he was the One the world was waiting for. He’d strongly hinted at it to Nicodemus, the respected teacher of Israel. But it was the woman at the well to whom he said, “I am he.”

She’d gone to the well for regular water, but Jesus offered her living water— something deep within that she could depend on during good times and bad, something that would never dry up. What he offered her was the same thing he’d talked to Nicodemus about in the chapter before. And that was the Holy Spirit.

As we go forward in time and move deeper into crisis, let us acknowledge that God remains with us, and nothing that happens will be beyond the reach of grace. As a German hymn writer put it: You can fall no deeper than into the hand of God. [2]
—©2020 Sam L. Greening Jr.