The Apple of Your Eye 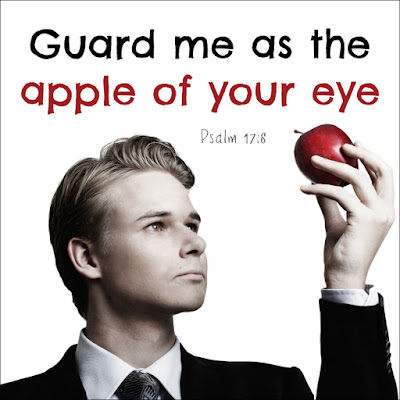 Show your marvelous loving-kindness, you who save those who take refuge by your right hand from their enemies.
Keep me as the apple of your eye; hide me under the shadow of your wings.
—Ps. 17:7-8

I don't think there's a more confusing idiom in the English Bible than the one usually found in Psalm 17:8. Its not found in all English translations, but most of them have the psalmist praying that God would guard them as the apple of God's eye. Since an apple is a sweet piece of fruit, I have always assumed this was simply a term of endearment, and I've heard it used that way many
times—the apple of a person's is like a thing that one views lovingly.

But this isn't a Hebrew idiom at all. The literal meaning of the Hebrew term כְּאִישׁוֹן בַּת-עָיִן is like the dark spot of the daughter of the eye—the "dark spot" being the pupil. Though this term isn't nearly as poetic as "apple of the eye," it is not without its own fascinating history. The word אִישׁוֹן (dark spot) looks like it might also mean little man. And what do we see when we look into the dark spot in another person's eyes but a tiny reflection of ourselves. Thus, the Latin translation of this word was similar to the possible Hebrew interpretation: pupilla, meaning doll or puppet (based on the pupus or pupa, meaning boy or girl). And since I've always wondered why the black spot in the center of the eye, and a child who learns in school are represented by the same word—pupil—here's my answer: Both refer to a miniature man or woman.

Well, all this is very interesting, but what's it mean? Psalm 17 is prayer for help in time of need, and the 8th verse is a plea that God will protect me as closely as I might protect not just my own eye, but my own pupil. It's a bold prayer, really, but the actual Hebrew isn't nearly as sweet as most English-speakers have been led to believe by the traditional translation. But that doesn't mean it's not more deeply meaningful.

I'll let the original meaning guide my prayers this morning:

Show me current crisis through your eyes, O God, and may my prayers be not for myself alone, but for all those whom you love; in Jesus' Name, who taught me to pray: Our Father...