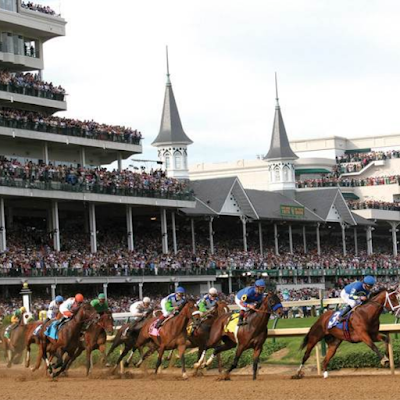 What we look forward to every year on the first Saturday in May won't be happening this year because of the lockdown... at least not in May. But there are lots of alternatives, including this very special remote performance by 100 students from 13 commonwealth colleges and universities.


My favorite version of the song will always be this one, by Linkin' Bridge.

I was rather disappointed by this verson by the cast of the Stephen Foster Story.

This one would've been great, if the singers hadn't treated being sold down the river away from your family as though it were great fun.


Here's a classic choral version from the University of Louisville's Cardinal Singers. I find using the word "children" a bit off-putting.

Finally, here's the most famous version of the song, i.e. as it's sung as the horses make their way to the starting gates at the Kentucky Derby. It's always very moving, but better in theory than in practice, since the crowd isn't really following the band (or anyone else, it would seem).