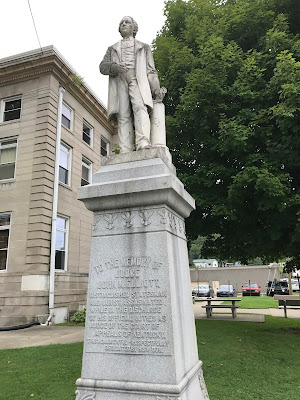 Boyd County, Kentucky was formed in 1860 from parts of Greenup, Carter, and Lawrence Counties. Remember those names, because they might prove important to the point being made in this post. Anyway, in front of the county courthouse in Catlettsburg is this statue of a "judge" named John Milton Elliott. Further research reveals that, yes, Elliott (a native of Virginia who was reared in Morgan—now Elliott—County, Kentucky) was a judge serving Bath County at the time he was assassinated by a deranged man for allegedly denying justice to a widow. Before that he had been a U.S. representative from Floyd County. He went on to serve in the Kentucky legislature as a representative from Floyd County, but was expelled in 1861.

Well, because of treason. He had given aid and comfort to an enemy, namely the unrecognized Confederate States of America. After his expulsion, he was part of a tiny group of men who created the provisional Confederate government of Kentucky, and he went on to serve in the Confederate senate.

As I indicated earlier: Upon reading his biography, it is clear that Elliott had nothing to do with Boyd County or any of its predecessor counties at any point in his life. Moreover, Boyd County was so staunchly pro-Union during the war, that the erection a statue of a Confederate on the courthouse lawn is a travesty which would have shocked any Boyd Countian who experienced the Civil War firsthand. It appears, a generation after the war ended, that his widow shopped around for a county willing to accept her donation of a statue, and some ill-informed officials in Catlettsburg were the ones who accepted.

As we discuss the removal of Confederate monuments around the country, really the first one to be brought down should have been this bit of nonsense on the corner of Louisa and 28th Streets. It is a representation of an historic figure who stood for that which Boyd County was against, who was not from Boyd County, and who never practiced law in nor represented Boyd County in any way—except as a senator in a government which Boyd County men and boys were willing to die to see defeated.

Perhaps the commissioners of Boyd County could vote to offer this statue to Sandy Hook, the seat of the county named after this man's father. If not, the confluence of two large rivers is a mere block away—perhaps it's time Judge Elliott learned to swim. 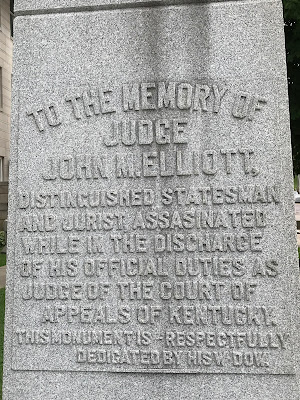