The Wisdom of Age 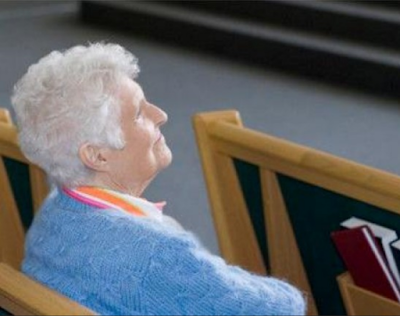 Do not cast me off in the time of old age; do not forsake me when my strength is spent.
❦ Ps 71:9
❦

Look, I get it. Congregations want younger people. A church that has no young people may have to shut its doors in a generation. But that doesn't mean I like seeing the blurbs in my denomination's employment opportunities section stating explicitly that a particular congregation wants a pastor who can "attract young families" without making mention of loving the elderly, too.
❦
Most older people also like seeing younger people in the church. But let's not cast our seniors off in the process. It was often their vision and hard work that built the community of faith into something substantial, and it's even more often their gifts that keep it going in its present form. So I think they deserve more respect than we often give them.
❦
The wisdom of age used to be something that society not only treasured, but needed in order to survive. But that has changed. Wisdom is now seen as quaint at best, and undesirable at worst. Our culture thrives on constant innovation, and the way things used to be done are an impediment. Old age is simply a reminder of the past. And of the reality of death.❦

And so a church that advertises openly that it wants to attract younger people thinks it wants to grow. But too often, it's just being influenced by and promoting the current wisdom-denying mindset. We should be nurturing our society with a healthy respect for age, but instead we're feeding off society's fear of age.❦

And quite frankly, a church advertising that it wants a pastor who can attract only young people is no less offensive than advertising that it wants more white people or heterosexuals or rich people. We have learned too well the lesson that homogeneity and youth are keys to church growth. But I've met people who attend mega-churches, and they don't seem to have a monopoly on spiritual maturity, deep faith, or Christian love. If anything, people from small, struggling congregations seem more likely than their large-church counterparts to demonstrate those things—if for no other reason than that their gifts are more critically needed for the good of the community.
❦
So let's rid ourselves of the notion that only young people matter and that huge churches are by definition healthier than small ones. Certainly churches in transition need to think about how to attract people of all sorts, and it's the rare church that needs to shrink in size. But if a congregation truly wants to be Christ's beloved community, it probably needs to start by finding ways of expressing that need that don't throw those who are already a part of it under the bus.
❦
As I watch the world around me treat the elderly as dispensable, Lord, I pray that you will not cast me off. In the meantime, may I remind people of all ages that if you considered them worth the life of your Son, then certainly their lives are worthy of the church's attention; and, even when their strength is gone, that your strength is sufficient; in Jesus' Name who taught me to pray: Our Father...


❦ Give us, we pray, your peace in our hearts, Lord, at the end of the day. ❦