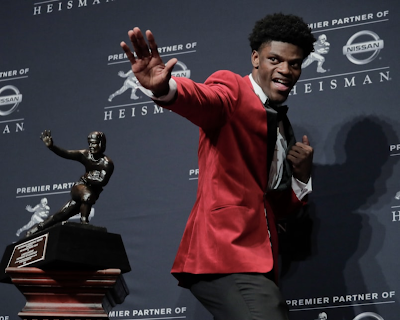 I'll never forget the summer of 2016 when I was visiting the Ville. I had stopped at an East End Starbucks wearing my Louisville ballcap, and as I was leaving, an older guy (yes, older than me) stopped me and told me he liked my hat. This was odd, because lots of people in Louisville wear Cards gear—indeed the gentleman who was talking to me had a Louisville shirt on himself. So I told him I liked his shirt.
We chatted a bit about the upcoming season, and he said he was really excited about our quarterback. I said, "Yeah, he's even getting some Heisman buzz." He looked at me kinda sorrowfully, as though I had just said something that only the pitifully naïve would ever dream of.

I thought of that conversation that December when Lamar Jackson was announced as the winner of the 2016 Heisman Trophy, and I wondered if that guy remembered what I'd said four months earlier.
Here's to you, Lamar. You continue to do us proud every day. And, by the way, here's a big "You're Welcome" to Baltimore football for Lamar Jackson and Johnny Unitas, their two greatest quarterbacks—both of whom played college ball at Louisville.
So as we get ready to play our season opener this Saturday, here's a little ad that ought to bring a tear to the eyes of every Card fan:
"I'll get you a new toothbrush."
Lamar Jackson, Baltimore ravens, Indianapolis colts, Baltimore colts, heisman trophy, heisman house, university of Louisville, Louisville cardinals, l1c4, go cards,