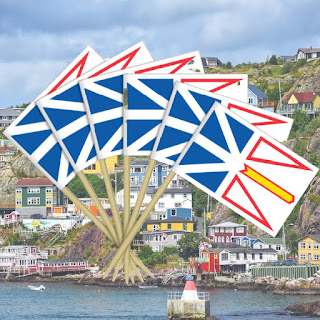 As is my custom, I dedicate a 9/11 post to those who kept me safe on this day in 2001. This post is only slightly altered from a piece I wrote last year for our local newspaper:
Autumn begins in September, and so this is a month of nostalgia for many. That notion of remembering is especially strong around September 11, as we remember the terrorist attacks on our country on that day in 2001.

All of us who were alive then experienced that Tuesday as a day of shock, but each of us remembers it in a different way. Some were personally visited by horrible tragedy. Some performed heroic deeds. Most remember feelings of incredulity and helplessness as they watched events unfold. But others of us remember something very different.

I was in the air that morning. And since my plane was just about to enter U.S. air space when the first of the Twin Towers was struck, my flight was diverted to the airport in Gander, Newfoundland—a town about the same size as Chardon.

I was one of thousands of people who found themselves sudden refugees in a place most of us had never heard of before. But for all the suddenness of it, the people of Gander needed only a few hours to prepare for the population of their town to more than double. By the time the people on my flight were deplaned, processed by Canadian immigration, and bused to the local high school at about midnight local time, every kitchen in the region had been working for hours, every linen closet had been emptied, and hundreds of volunteers had been dispatched. For the five days and nights we were grounded in Newfoundland, we experienced not a moment’s hunger or fear, taxis were not accepting money for trips downtown, prescriptions were filled for free, and those needing any sort of special care received it. Free clothing and toiletries (we weren’t allowed to access our luggage in the hold of our plane) were distributed and even entertainment was provided. And though we were Europeans, Americans, Arabs, and South Asians—and that was just my flight—there was peace and coöperation among the refugees.

One of the Bible passages that is sometimes appointed to be read in September—a reading some of the people of Gander had no doubt heard just before September 11, 2001—included this line: Do not neglect to show hospitality to strangers, for by doing that some have entertained angels without knowing it [Heb. 13:2]. Christian or not, they embodied this well-known verse. Thus, when I remember September 11, my mind is drawn back to the island of Newfoundland and the week I was treated like an undercover angel.

So much has changed since then, and not much of it for the better. But I have always felt that, had the leaders of earth’s nations experienced what we 9/11 refugees experienced at the hands of the people of Gander, things would indeed have turned out differently. I thank God for giving me a living image not only of what Hebrews 13:2 might look like, but also of how the Kingdom of God really is at hand, if only we will reach out and embrace it.