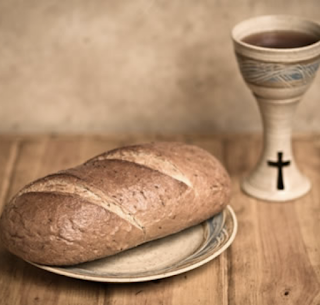 You never know as you're reading the Bible, what is going to catch your fancy should you take a notion to look at a verse in the original language. And, as it turns out, Psalm 78:25 is really interesting when you look at the Hebrew.
❧
When celebrate the Lord's Supper in church, I often think about the manna in the wilderness in terms of Holy Communion. And so I often meditate on these words from today's psalter portion:

Mortals ate of the bread of angels; he sent them food in abundance.
❧ Ps 78:25
❧

Just as God fed Israel the bread of heaven, so God feeds the church.
❧
But the word for angels used in this verse is אַבִּירִים, which literally means strong ones. And when that word is used in its singular form (אַבִּיר), it refers to God. So angels is probably the best translation, because it might also mean, "the bread of the gods."
❧
In a literal sense, God feeds the elect with the food of the mighty—that is, God feeds the weak with the food reserved for the strong; God feeds the humble from the table of the proud; nobodies eat the bread of the somebodies. We don't usually think of the Lord's Supper in those terms, but perhaps we should. We might look with envy—or at least be very impressed—when we see those who dine at elaborate state dinners, or people who eat in restaurants that we could not possibly afford. They are served the food of the important people, while we look on. Those of us who aren't wealthy are often little more than spectators of a lifestyle that is beyond our means.
❧
But when we gather at the Lord's Table, we are fed the bread of angels, the food of the mighty, divine fare. Like many of the people seated at the Supper, the outward appearance of the meal is quite humble. But oh what it contains: The very essence of the Son of God.
❧
The cup of blessing that we bless, is it not a sharing in the blood of Christ? The bread that we break, is it not a sharing in the body of Christ?
❧ 1 Cor. 10:16
❧
You are what you eat, and so the misfits and weaklings and nobodies who eat the divine fare become the very body of Christ in the world, commissioned to do important things by the power of the Almighty. The food doesn't look like much, but it's enough for the whole world. It is abundance itself.
❧
Thank you, Lord, that when you invited the world's wanderers to the banquet of your Son, you invited me. I offer this prayer in his Name, who taught me to pray: Our Father...