Sheep of His Pasture 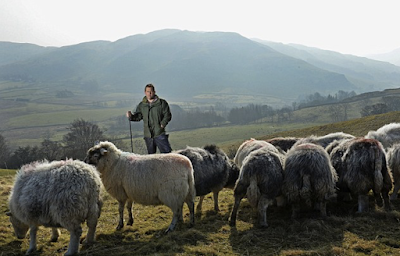 Know that the Lord is God. It is he that made us, and we are his; we are his people, and the sheep of his pasture.
✙ Ps 100:3
✙
Psalm 100:3 emphasizes a lot of stuff I tend to take for granted. First, what it emphasizes:
I usually read this as though everybody agrees that there's only one God (יהוה), and that everybody has always acknowledged this. But of course, at the time this was written, many gods were acknowledged, and so Israel's statement of faith that יהוה was the One God and the only Creator was revolutionary. Though we give this article of faith lip service today, we, too, serve many gods who are not יהוה.

And God's relationship to God's people is something else I either take for granted or misunderstand. I forget that Psalm 100:3 isn't saying that God claims all people—only Israel. And they are the ones who are shepherded by God as sheep in a pasture.

And when I remember what this psalm is actually saying, I, as a Christian, seem to think that I am automatically included among the sheep of God's pasture, or that I am among those who have replaced Israel—as though God would forget God's covenant with Israel in order to include me.

I have other sheep that do not belong to this fold. I must bring them also, and they will listen to my voice. So there will be one flock, one shepherd.

Christians usually read John 10:16 as though we're this fold, and that the other sheep are non-Christians. We often even include Jews among those other sheep. How we can possibly read that without acknowledging that we Gentiles are the other sheep and that Israel is this fold, I cannot fathom. But 2000 years of arrogance is hard to set aside.

Thank you, Lord, for your constant love for Israel. May I be among those other sheep you bring into your fold, that there may be one flock, and one Good Shepherd, in whose Name I pray as he taught me: Our Father...