The Tail End of Infinite 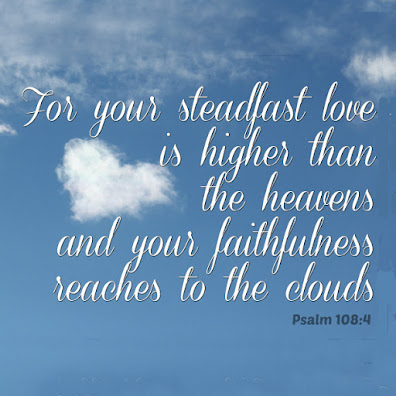 For your love is higher than the heavens, and your faithfulness reaches to the clouds.

There are two principle Hebrew nouns at work here, and either of them might be translated differently than what's found in the NRSV. The first one, חֶסֶד, which is translated as love, might better be rendered as either kindness or faithfulness. Old translations often use mercy (such as by Matthew Henry below). With the second one, אֶמֶת, I feel the NRSV did an even poorer job. Instead of faithfulness, firmness or truth would've been a much better option (once again, see below).

Matthew Henry explained this verse this way, which, though a bit unscientific in its scope, certainly works for me:


We cannot see further than the heavens and clouds; whatever we see of God's mercy and truth there is still more to be seen... in the other world.

In other words, what we see of God's kindness and truth are but the tip of the celestial iceberg. The fact that we've now seen much farther into the universe than in King David's (or Matthew Henry's) day makes God's attributes no less vast. Regardless of how much of the finite cosmos we experience, the tail end of infinite is still just the tiniest trace. And it's something that is to be experienced not only in the here and now, but also in the hereafter.

I am amazed, Lord, that your grace, which to me seems so amazing, is nevertheless just the smallest example of your love for me, for all people, and for the universe you have created. I thank you in the Name of Jesus Christ my Lord, who taught me to pray: Our Father...