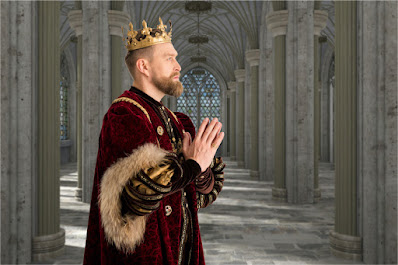 John Owen said that it's "the most foolish thing in the world to put our trust and confidence in anything that does not have the nature of God. Nothing but the immense nature of God can offer refuge to a poor soul in all the distresses into which it may fall." Therefore, to make God our refuge can be described as wisdom. He goes on to point out that nobody "takes their immediate refreshment out of the ocean," but that the ocean is the source of all refreshing streams. In the same way, we don't usually draw on "the immensity of God's nature" for our immediate refuge, but if we take the time to trace the places we find refuge to their source, all the providence that we depend on and all the true refreshment that we draw from the world have God's nature as their source.

The danger here lies in not looking to the source. When we see military might or public policy or human charisma as ends unto themselves, then we are acting as fools, who, after all, say in their heart that there is no God, or who look to other gods to save them or to make them feel whole.

The Bible never says to eschew human leadership. But it always calls on us to think of such leadership as a possible conduit of God's wisdom and might.

Thank you, O Holy One, that you are sufficient. Forgive me for looking to other mortals for salvation, when all strength lies in and derives from you. In the Name of your Son, who taught me to pray: Our Father...

This song was written by Henry Wadsworth Longfellow at the height of the Civil War after hearing that his son, Charles—who had enlisted in the Union Army without his father's leave—had been severely wounded. These were the original lyrics:
I heard the bells on Christmas Day
Their old, familiar carols play,
and wild and sweet
The words repeat
Of peace on earth, good-will to men!

And thought how, as the day had come,
The belfries of all Christendom
Had rolled along
The unbroken song
Of peace on earth, good-will to men!

Till ringing, singing on its way,
The world revolved from night to day,
A voice, a chime,
A chant sublime
Of peace on earth, good-will to men!

Then from each black, accursèd mouth
The cannon thundered in the South,
And with the sound
The carols drowned
Of peace on earth, good-will to men!

It was as if an earthquake rent
The hearth-stones of a continent,
And made forlorn
The households born
Of peace on earth, good-will to men!

Then pealed the bells more loud and deep:
"God is not dead, nor doth He sleep;
The Wrong shall fail,
The Right prevail,
With peace on earth, good-will to men."