He Raises the Poor 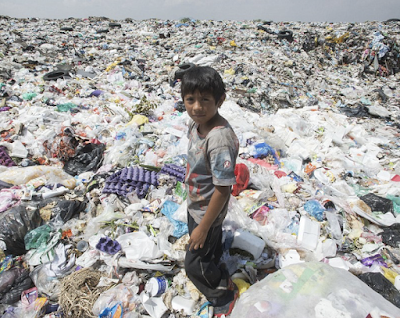 I can't imagine it north of the Rio Grande or in Europe, but there are many places in the world where garbage dumps are inhabited by very poor people—including one such dump just a few miles south of the place that refers to itself as America's Finest City. Unable to find work elsewhere, and living in a country that offers no safety net, these are people who relentlessly scavenge a life out of others' refuse. It sounds like hell, but it's their life. There are even missionaries who set up schools for the kids who live in such places.

And so these children living in dumps are what I picture when I read the verses I'm meditating on today:

He raises the poor from the dust, and lifts the needy from the ash heap, to make them sit with princes, with the princes of his people.
✙ Ps. 113:7-8
✙
When I take these words literally, my view of God cannot but be transformed. A God whose love for the poor goes this far? Placing the kids eating, wearing, and playing with the garbage of Tijuana in Buckingham Palace? The problem is, even when my understanding of God is transformed, it too seldom changes the way I think of people. Yet I suspect God is less concerned with how amazing I think God is, than how much attention I pay to the needy in the world in which I actually live. The world has the resources to free the oppressed and lift up the downtrodden. God has shown us miracles in which this very thing has been done. We have both the materials and the example. And yet we do nothing.

May my meditation on Psalm 113:7-8, therefore, change not so much my attitude, but my resolve.

Holy One, thank you for your love for the poor, and forgive my indifference. I ask not only for forgiveness, though, but for a new heart, a heart to love your people as you do; in the Name of him who became poor that I might be rich, and who, in the process, taught me to pray: Our Father...

This is the original recording of this classic, which has since been covered by hundreds of other artists. The Harry Simeone version was released in 1962, a month after the song was written as a plea for peace during the Cuban Missile Crisis.