If there's safety in numbers, let us be courageous enough to be Christlike in our willingness to go out on a limb for the sake of the troubled
Then I myself will gather the remnant of my flock out of all the lands where I have driven them, and I will bring them back to their fold, and they shall be fruitful and multiply.
✙ Jeremiah 23:3
✙ 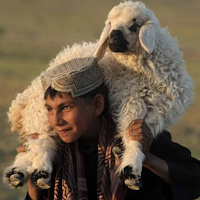 There's safety in numbers, or so we say. By that we usually mean that it's easy to be outspoken when you're saying the same thing everybody else is saying. But biblically speaking, it might just mean that God will place a wandering, lone sheep ahead of the rest of the flock. In the Hebrew Bible it was the remnant of the flock that was saved. And in the New Testament, Jesus said a shepherd would leave the rest of the flock in order to rescue the one that had gotten itself into trouble.
So if there's safety in numbers, then let the sheep in the fold tend to one another as we await the return of the wayward lamb. And then let us welcome the lost with no less joy than the angels in heaven rejoice at the salvation of a single lost soul. And if there's safety in numbers, let us—like Christ—be courageous enough to go out on a limb for the sake of the troubled.
✙
Which one of you, having a hundred sheep and losing one of them, does not leave the ninety-nine in the wilderness and go after the one that is lost until he finds it?
✙ Luke 15:4

✙
O Savior, who goes after those who are lost until you find them, teach me to minister to the needs of others. May I compassionately regard those who do not know you and whose lives are one long outrage against your forbearing love. Give me something of your Shepherd compassion and long-suffering.
✙ F.B. Meyer