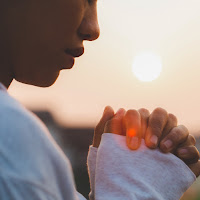 In the scriptures, God sometimes turns the divine face toward or away from someone. Naturally, to have God's face pointed in your direction is a good experience—it's a metaphor for God's lovingkindness. What's interesting is that God's face is often turned toward those whom no one else sees or cares about.
Such was the case with the slave woman Hagar. She had no say in her own fate, but was being used by Sarah and Abraham for their own purposes. Though they did not appreciate her as a human being, she was known by God, and God had a purpose for her. Thousands of years later, we still remember her, and the fact that she was seen by God.
Those who are rejected by others have throughout history been known to God. In fact, the less visible people are to other human beings, the more visible they seem to be to God. The prayer of the proud might be disregarded by the Ruler of the universe. But the prayer of the humble is always received with love.
✙
But the tax collector, standing far off, would not even look up to heaven, but was beating his breast and saying, ‘God, be merciful to me, a sinner!’
✙ Luke 18:13
✙

✙
When I am dejected, O God, help me to remember that you see me, and that you care.
✙