The Kindom of God

Then the Lord God said, “It is not good that the man should be alone; I will make him a helper as his partner.”
✙ Genesis 2:18
✙ 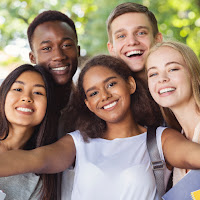 Many Christians these days emphasize family. And there's no denying that the Bible has a lot to say on the subject. It's there in the very beginning of the Hebrew Bible, and it's a subject Jesus addresses. The problem is, the Old Testament concept of family has little in common with what the modern church encourages among its members: polygamy, hierarchy, sexual abuse, the death penalty for disrespectful children—these are all part of what we see advocated by some ancient biblical witnesses.
✙
Jesus' teachings about family are much to be preferred, but they are also distasteful to many of the churches that claim to be advocates of the theme. Our Lord actually discouraged his followers from limiting their idea of family to the biological (or what we call the nuclear) family. Jesus' family included all who did God's will. And one of his last actions was to create a new non-biological family by declaring Mary and John to be mother and son, though they were not related by blood.
✙
One of the most helpful ways to understand biblical family is a relatively new term that I've encountered—and have even used recently—that looks like a typo. It's the Kindom of God. I once viewed this expression as a somewhat clumsy attempt to avoid exclusive language. A kingdom implies an aristocratic form of government headed by a male. Since it's wrong to limit God to a particular gender, and Jesus clearly didn't advocate for an aristocracy, I agree that the word kingdom gives a false impression of what he was talking about.
✙
Perhaps the word kindom really does come closer to what Jesus taught about both God's reign and human family. Jesus didn't really teach us that God was a Monarch, but that God was a loving Parent. And Jesus certainly didn't encourage us to limit our family love to those we're related to by blood, but instead to view all who loved God as our brothers and sisters. And so when Jesus proclaimed the Βασιλεία τοῦ Θεοῦ (pronounced Basileia tou Theou), if we allow his teachings to interpret what he meant by that, I'm all for allowing English-speakers to refer to it as the Kindom of God: a worldwide connection of people who love each other as sisters and brothers and who look to God as a Parent whom we love and obey.
✙
When Jesus saw his mother and the disciple whom he loved standing beside her, he said to his mother, “Woman, here is your son.” Then he said to the disciple, “Here is your mother.” And from that hour the disciple took her into his own home.
✙ John 19:26-27
✙

✙
Help me, O loving God, to look beyond the traditions I have grown up with to see you as a loving Parent and all who serve you as my brothers and sisters in Jesus' Name.
✙