No one shall be found among you who practices divination, or is a soothsayer, or an augur, or a sorcerer, for whoever does these things is abhorrent to the Lord.
✙ Deuteronomy 18:10, 12
✙ 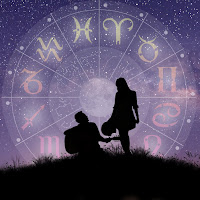 The Bible is a collection of books filled with encouraging words and joyful acts. Those of us who read it like that part. And if we share it at all, that's the part we're most likely to share. But the Bible also contains words of discouragement. And whenever God's people are tempted to hand control of their lives over to powers that are not God, the scriptures come down hard against it.
We've been told of a God who is eternal and sovereign and ever-present. But most important is something the Bible emphasizes from beginning to end, but which we either miss, or neglect. And that is that God is a Person. This means that God is not an impersonal power running the universe as though it's a machine, but a caring Being who directs all things out of love.
But there are many who reject such a God, who are obsessed with horoscopes, the zodiac, star charts, etc. The Bible seems to be aware of this tendency in human beings, discourages it not just for the sake of rule-making, but because it views a relationship with a loving God as far superior to allowing one's life to be dictated by impersonal powers. I have no idea if it's the case or not, but if it were proven, I would willingly admit that the stars and planets do somehow influence our lives. I would still adhere to the scriptural injunctions against trusting in such powers. Even if my horoscope could help me gain wealth, it would only place my heart in the wrong place; and even if the zodiac directed me to romantic love, it could not lead me to God's love.
In the end, it is pointless to place my life under the control of that which is not God. Even if such behaviors and practices gain me wealth and popularity, they do not nourish my relationship with the One who set the worlds in motion, who died for me, and who offers me abundant life on God's terms.
✙
For the fruit of the light is found in all that is good and right and true. Try to find out what is pleasing to the Lord. Take no part in the unfruitful works of darkness, but instead expose them.
✙ Ephesians 5:9-11
✙

✙
I place my life in your hands, O Eternal One. Deliver me from all powers that do not draw me closer to your love; in Jesus' Name.
✙