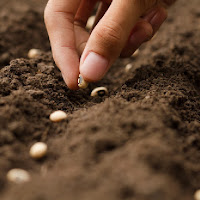 They removed Christ's body from the cross and would have disposed of it in the dump, had not Joseph of Arimathea come forward to claim it. Thus was God's love put in the ground, God's justice placed in the earth, and our hope laid in a stone cold tomb—a lifeless husk.
But just as a grain of wheat appears to be a tiny, desiccated bit of chaff until it is buried in soil, so the body of our Lord was filled with the potential for new, fruit-bearing life until its third day's rising.
Jesus lived his life for others, and in the end, it was for others that he gave it. His death destroyed the power of the grave and his love delivered us, once and for all, into the hands of God. Never again will God's people suffer pointlessly, and never again shall we die alone. It was the Holy Spirit who brought Jesus back from the dead, and because of the gift of that same Spirit, we belong to God both now and forevermore.
✙
For Christ also suffered for sins once for all, the righteous for the unrighteous, in order to bring you to God. He was put to death in the flesh, but made alive in the spirit.
✙ 1 Peter 3:18
✙
O God, Creator of heaven and earth:  Grant that, as the crucified body of your dear Son was laid in the tomb and rested on this holy Sabbath, so we may await with him the coming of the third day, and rise with him to newness of life.
✙ A New Zealand Prayer Book
Losung Losungen Moravian Daily Texts Watchword Watchwords Lehrtext Lehrtexte Teaching Text
Text selection ©2020 Evangelische Brüder-Unität