From Saul to Paul

He will bring me out to the light; I shall see his vindication.
✙ Micah 7:9
✙ 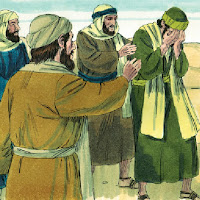 Saul was a blind man. He could see fine with his eyes. But his heart was closed and could see nothing new, nothing beyond what Saul had already experienced. Because of his acute blindness, he persecuted disciples of Christ, even looking on in approval when they were put to death.
One day, when he was on his way to Damascus to continue his persecution, Christ healed him of his heart-blindness... by taking away his eyesight. His world was now as benighted on the outside as his inner being was. Saul then found out that in persecuting Christians, he was persecuting the Messiah of God.
Though Saul eventually received his eyesight back again, the real miracle was that his dark heart was brought into the light. To mark his deliverance he went forth not as the old Saul, but as a newly minted apostle named Paul.
Any time I'm tempted to judge someone else's beliefs—whether they're a different religion or a Christian who disagrees with me—I need to remember Paul. Though my judgment of what I don't understand is not as harsh as his, I need to remember that Christ's response to those who differed was to listen and to love. I don't have to adopt another person's beliefs in order to appreciate them, love them, and pray for them.
✙
Ananias went and entered the house. He laid his hands on Saul and said, “Brother Saul, the Lord Jesus, who appeared to you on your way here, has sent me so that you may regain your sight and be filled with the Holy Spirit.”
✙ Acts 9:17
✙

✙
Eternal God, may my response to people I don't understand be Christlike in its love and grace. May I be more prone to listen than to judge.
✙