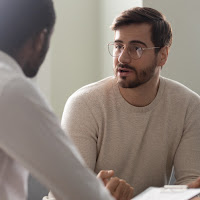 In both today's daily text and its corresponding teaching text, the confession of sin is an important feature. What's interesting is that, in the Losungen, the part about sin is omitted, giving the appearance that both verses are simply about prayer in general.
The fact of the matter is that praying for one another's forgiveness is important in both the Old and New Testaments. It's significant that we're encouraged to admit to one another our wrongdoings, and to pray for a brother's or sister's freedom from guilt.
In the late 1930's, Dietrich Bonhoeffer, who was in charge of a seminary for the training of pastors who would not bend the knee to Hitler, wrote a small book called Life Together (Gemeinsames Leben in the original German). In the section of the book in which he talks about confession, he wrote:

Who can give us the certainty that, in the confession and the forgiveness of our sins, we are not dealing with ourselves but with the living God? God gives us this certainty through our brother. Our brother breaks the circle of self-deception. A man who confesses his sins in the presence of a brother knows that he is no longer alone with himself; he experiences the presence of God in the reality of the other person. As long as I am by myself in the confession of my sins everything remains in the dark, but in the presence of a brother the sin has to be brought into the light. But since the sin must come to light some time, it is better that it happen today between me and my brother, rather than on the last day in the piercing light of the final judgment. It is a mercy that we can confess our sins to a brother.*

Let's be thankful, therefore, that we are never left alone on our path. Whether we are giving praise for all that's right or admitting what's wrong, it is God's will that we share our Christian experience.
✙
Therefore confess your sins to one another, and pray for one another, so that you may be healed. The prayer of the righteous is powerful and effective.
✙ James 5:16
✙

✙
Give me strength and grace to approach my brother or sister with my confession of sin, that I may not be left alone in the dark, but may come into your light, O God.
✙